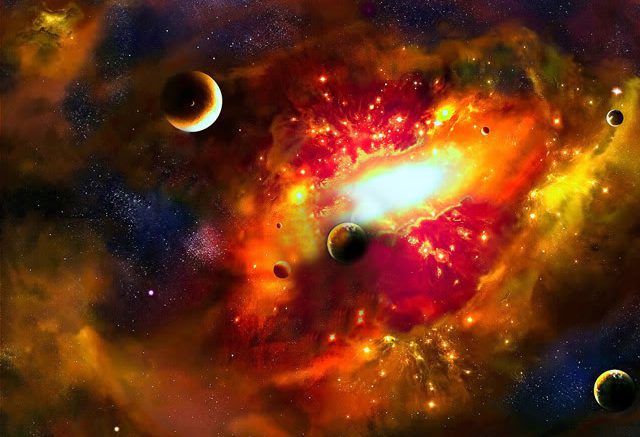 The seven Earth-size worlds have been discovered orbiting a star just 39 light-years away, and most may have the right conditions to host liquid water on their surfaces with possibly the right temperatures and atmospheric conditions to support life.

Seven Earth-like rocky planets orbiting a nearby star roughly the size of Earth could be right for natural liquid water and maybe life to adorn their surfaces, researchers announced Wednesday.

The planets, which circle a star called TRAPPIST-1 just 39 light-years away, are tucked together so tightly that they routinely adorn each others’ skies, sometimes appearing as shimmering crescents and at other times as orbs nearly twice as large as Earth’s full moon.

“The spectacle would be beautiful,” says the University of Cambridge’s Amaury Triaud, co-author of a study describing the otherworldly heptad that appears in the journal Nature.

The TRAPPIST-1 system is now tied with several others that have seven planets for the greatest number of planets in a stellar system other than our own (which has eight, not counting dwarf planets such as Pluto).

The system’s existence suggests that Earth-size temperate planets are much more plentiful than previously imagined.

Now, it’s among the best neighborhoods to study for signs of life beyond Earth: The relative sizes of the planets and star, plus the system’s proximity, mean that plucking the signatures of life as we know it such as breathing organisms from the planet’s atmospheres could be within reach.

“Those yawning over yet another discovery of habitable-zone planets may not fully appreciate that priorities are shifting and focusing,” says NASA’s Natalie Batalha. “Temperate, terrestrial-sized planets are relatively common in the galaxy. The name of the game now is to find those near enough for atmospheric characterization.”

If the name TRAPPIST-1 sounds familiar, it’s because scientists have been announcing discoveries about the star and its planets for nearly a year now, aided by a plethora of telescopes based in Chile, Morocco, South Africa and multiple other locations.

Last May, the team presented evidence that at least four planets orbited the star, three of which were deemed Earth-size and potentially habitable.

Then, in July, MIT’s Julien de Wit reported more about what two of the planets could be like, suggesting denser atmospheres like those of Earth and Venus.

Now, after aiming NASA’s Spitzer Space Telescope at the system for 20 unblinking days and nights, scientists have spotted and confirmed even more planets around TRAPPIST-1.

Though their home star TRAPPIST-1 is a relative mini guy at only 8 percent of the sun’s mass and about one-thousandth as bright it is among the most common types of stars in the Milky Way galaxy, called an M dwarf. The star’s feeble light washes over the seven sister planets in mostly infrared, which can be felt as heat but is invisible to the human eye. Creating warm, dark planets.
Spitzer can see in infrared, and as the telescope stared at the star, a pattern began to emerge. The star’s infrared light would periodically dim as its planets marched across its face, casting shadows that betrayed their presence. Among those blips, scientists counted signs of seven planets.
Three were the original Earth-size planets announced last year. Curiously, further scrutiny revealed that the fourth “planet” announced in 2016 turned out to be two separate worlds, then an additional two planets shook themselves loose from the starlight to complete the cosmic septet.

“The detections of the six inner planets are very secure, and the seventh planet is likely real too.” says Lauren Weiss of the Université de Montréal. “If TRAPPIST-1 could make this many planets, there are probably a lot of other small stars with a similar number of planets.”

Called TRAPPIST-1b, 1c, and so on through TRAPPIST-1h, the planets have years ranging in length from 1.5 to roughly 20 Earth days. They’re snuggled closer to their star than Mercury is to the sun and, like siblings in a crowded household, they gravitationally tug and jostle one another, causing slight delays and perturbations in the pattern of blips spied by Spitzer.

Based on those perturbations, scientists could determine the approximate masses of the planets. They found that in addition to being roughly Earth’s size, they’re also roughly the same mass.

That means the seven sisters are likely rocky, although it’s possible they could be small worlds enveloped in big fluffy atmospheres, says Weiss.
With the caveat that TRAPPIST-1h’s orbit isn’t well known, it seems three of the planets as least, TRAPPIST-1e through TRAPPIST-1g—are squarely in the star’s habitable zone; the rest could be habitable, or at least, the right temperature for water to pool and flow across their surfaces if their internal anatomy and atmospheres cooperate.

Until recently, scientists searching for Earth’s cosmic cousins concentrated on stars similar to our sun. This discovery, plus others, suggests that small, dim stars are also quite capable of hosting ‘Earths’, good news for those keeping track of how many such planets might be populating the galaxy.

“The authors could have been lucky, but finding seven transiting Earth-sized planets in such a small sample suggests that the solar system with its four Earth-sized planets might be nothing out of the ordinary.” writes Leiden University’s Ignas Snellen in a commentary accompanying the study.

Scientists are particularly intrigued by TRAPPIST-1f, the fifth rock from its star, and suggest that it could be in the sweetest of the spots where life could thrive.

The system is comparable in scale and architecture to Jupiter and its four large moons, each of which orbits the giant planet with the same face pointed inward, all the time. TRAPPIST-1’s planets likely do the same, meaning that one of their hemispheres is kept relatively toasty while the other is perpetually facing into the cold cosmic night.

That doesn’t mean life couldn’t evolve on such a world especially if there’s an atmosphere but it does present some challenges, says study co-author Michaël Gillon of the Université de Liege.

Also, the planets are so close to their star and one another that as they jostle their way through an orbit, gravitational forces flex and heat their interiors, much as Jupiter does to its large moons. This process, called tidal heating, is why Europa’s interior contains a global, sloshing sea, and why Io is the most volcanic place in the solar system.
So, although warm, some of the planets “might more closely resemble Io, Jupiter’s moon that completely resurfaces itself with its own volcanic innards every 2’000 years, than the balmy beach that I associate with the word ‘habitable’.” Weiss says.

Most importantly, a planet’s surface temperature depends greatly on the characteristics of the planet itself, especially its atmosphere. Just take a look at how hot and hellish Venus is, courtesy of its stifling greenhouse gases.

That doesn’t mean scientists aren’t interested in looking for life in the TRAPPIST-1 system; in fact, they’re already at it. The Hubble Space Telescope is busy peering at those exo-atmospheres, and NASA’s Kepler spacecraft has been keeping an eye on the system since December, searching for more planets and working to better understand those that are there.

In the next several years, the James Webb Space Telescope should be able to take an even closer look at TRAPPIST-1 and its clutch of worlds.

It’s tricky for scientists to figure out exactly what signature of life to look for, since anything that evolved to take advantage of TRAPPIST- 1’s infrared light would be quite un-earthly indeed. Rather than one single molecular fingerprint, life will likely announce its presence by tweaking the ratios of various compounds.

“It’s really the combination of the different molecules,” Gillon says. “Oxygen is not enough.”
Still, just getting a good look at the planets’ atmospheres will be a huge step, and there’s always a chance astronomers will get lucky and spy something familiar. If life managed to thrive and releases gases similar to what we have on Earth, then we will know.” Triaud says.