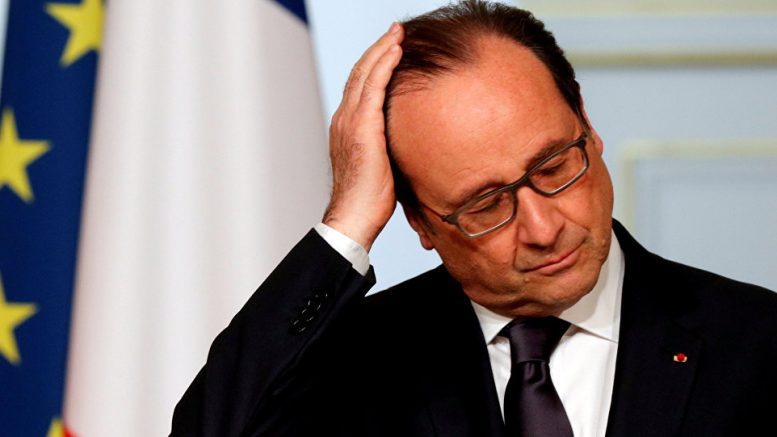 A French police sniper has accidentally shot and injured two people during a speech by President Francois Hollande in western France.
The shot was fired as the officer moved position on a roof top circa 100 meters from a tent where Mr Hollande was speaking in the town of Villognon.

The bullet pierced through the canvas of the tent, where drinks were being made. It passed through a waiter’s thigh and lodged in another person’s calf.
The injury to the thigh could have been life threatening due to blood loss.
Hollande was inaugurating a new stretch of railway when a loud noise like a gunshot was heard. He interrupted his speech for a few moments, but reports said there was no panic.
“I hope it’s nothing serious. I think not,” Mr Hollande said as he paused his address to ask whether anyone had been hurt.
The president later visited the injured, the head waiter of a local hotel and an employee of a railway maintenance company.
One local officer said the safety catch of the sniper’s weapon was likely unlocked, allowing the gun to be discharged accidentally.
The marksman is based with a special protection unit in nearby Poitiers, officials confirmed.

The officer can not be named due to an ongoing judicial investigation which has now has been launched into the incident.