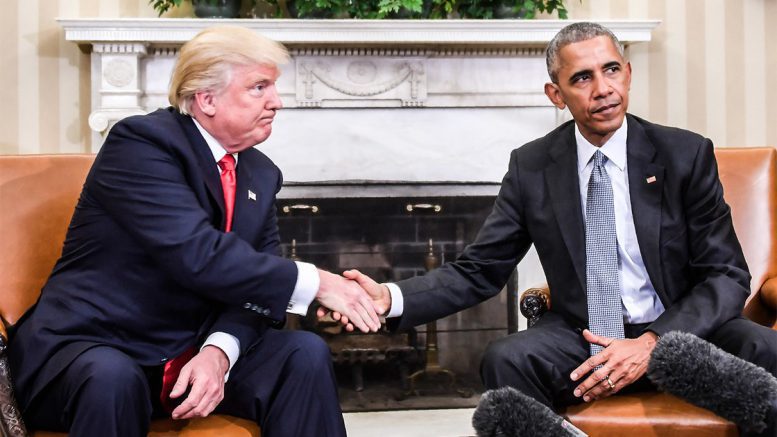 Republican Senator Ben Sasse said Trump’s comments were “serious” and he should explain the alleged wire-tapping and how he came to know about it.

The Republican president has supplied no details to back his claim.

Obama never “ordered surveillance of any US citizen” his spokesman said.

Trump’s tweets follow allegations made by conservative radio host Mark Levin, including that the Obama administration “sought, and eventually obtained, authorisation to eavesdrop” on the Trump campaign last year.

Other media reports had previously suggested the FBI had sought a warrant from the foreign intelligence surveillance court (Fisa) in order to monitor members of the Trump team suspected of irregular contacts with Russian officials.

Whilst the allegations are levelled at the Obama administration, Obama’s spokesperson’s clever use of words to say Obama himself never ordered any such surveillance falls far short of a rebuttal to the claim.

The warrant was first turned down but then reportedly approved in October according the the UK state media company ‘BBC’, though there has been no official US confirmation.

Under Fisa, wire-tapping can only be approved if there is probable cause to believe that the target of the surveillance is an agent of a foreign power.

There have since been Federal investigations into the Trump administration over undisclosed contact with the Russian government during the election campaign.

Trump, who has been facing intense scrutiny over alleged Russian interference in support of his election campaign, made the allegation in a series of tweets.

Writing from his weekend home in Florida, he called the alleged tapping “Nixon/Watergate”, referring to the most notorious political scandal of 1972, which led to the downfall of President Richard Nixon after a web of political spying, sabotage and bribery was exposed by the media.

The spokesman for Obama, Kevin Lewis, added to his statement that the accusation was “simply false”.

A “cardinal rule of the Obama Administration was that no White House official ever interfered with any independent investigation led by the Department of Justice” he said.

The statement left open the possibility that a judicial investigation had been taking place and that the Obama administration had authorised such surveillance via a non White House official, instead such measures could have come from the White House appointed head of the Department of Justice or such likes for example.

Earlier Ben Rhodes, who was Obama’s foreign policy adviser and speechwriter, also addressed Trump’s claims in a tweet, saying: “No President can order a wire-tap. Those restrictions were put in place to protect citizens from people like you.”

As the Trump administration continues to be bedevilled by a drip-drip of revelations about ties to Russian officials during and after last year’s election, the president has seemingly settled on the identity of the malevolent figure behind the turmoil.

It was the former president, Trump asserts, who is guilty of meddling in the 2016 campaign, not Russia. Obama, he says, is the one whose deeds merit investigation.

The president’s early morning tweets follow an interview in which he accused Obama and “his people” of orchestrating recent political protests across the US and of being behind the government leaks that have embarrassed the White House.

There is scant evidence supporting these allegations, but charges like these fit a pattern. Trump is at his sharpest when pushing back against perceived antagonists, such as Republican primary opponents like Jeb Bush, establishment conservatives who resisted his nomination or Hillary Clinton in the election.

Now Trump is returning to his favourite political foil, a necessity given the current Democratic power vacuum in Washington. It could mark the beginning of a massive water-muddying effort in which any forthcoming investigatory revelations are swept up in a growing partisan maelstrom. A technique not alien to any businessman of burying bad news in a pile of controversy, doubt and scandal.

The accusations have become a pedantic war of twisting words, Trump indicating through poor choice of words that Obama personally ordered such surveillance but implying the then administration. The previous administration picking up on this tiny crack in terminology and blowing it up as the only point of contention that Obama could not have personally done so, yet not ruling out that the administration itself did.

Such spin and twist techniques are common place in courts of law, politics, media and high end corporate business where one single miss placed punctuation mark can change the implications of a statement dramatically.