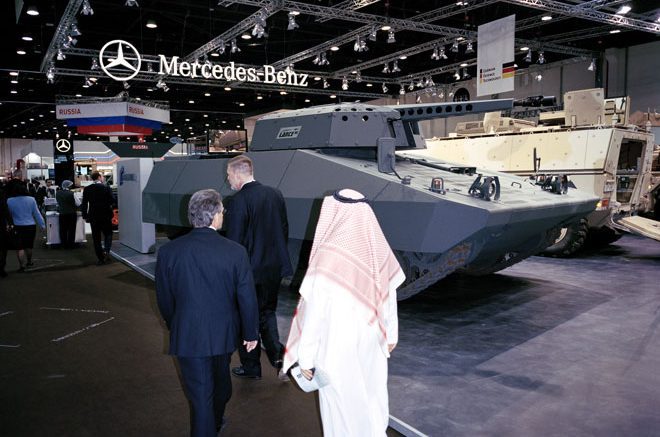 Why is the global arms trade booming right now?

The four-day event was a roaring success, playing host to 1’235 exhibitors and a record number of delegates. On the last day, the United Arab Emirates announced $5.2bn worth of weapons purchases from suppliers including France, Russia and America.

The Gulf state’s hunger for big guns is hardly exceptional. The Stockholm International Peace Research Institute (SIPRI), a think-tank on such matters, recently released data showing that transfers of big weapons in 2012-16 reached their highest volume for any five-year period since the end of the cold war. At a time when international trade is flagging, why is the global arms trade doing so well?

The frail security balance of an increasingly multipolar world has many countries worried. Since the end of the cold war, scholars have found that greater instability, both internal and external has tended to be correlated with a rise in military spending, as intuition would suggest.

What has changed in recent years is that a larger share of the money is going towards imports. In contrast with the 90’s and 00’s, when the West’s armies undertook the bulk of the fighting in Afghanistan, Bosnia and Iraq, many nations sucked into this decade’s disputes lack military muscle and have no domestic industry capable of building it up.

With The US now seemingly less eager to be the world’s policeman, they see a greater need for buying their own kit. Vietnam, which borders the South China Sea, imported three times more weaponry in 2012-16 than 2007-2011. Saudi Arabia’s purchases grew 212% and Qatar’s by 245%.

The trade is also underpinned by a push on the supply side. USA, which sells arms to more than 100 countries, dominates the market. As technology improves, it is helping retool developing nations’ arsenals with modern gadgets, such as GPS guidance and automated systems. US military exports grew 42% from 2008 to 2015. Other exporters see a lucrative market too. China, known in the 90’s for its knock-offs of Western equipment, has emerged as a top-tier supplier. It’s flagship tankmaker celebrated the country’s participation at IDEX this year by taking over one of the fair’s largest stands. South Korea sells aircraft and warships to Latin America and Russia is building on its cold-war legacy business. Italy and Germany are maintaining European dominance over small arms.

The proliferation of conventional weapons is a source of volatility in itself. Am infinite self perpetuating market founded on the bloodshed and misery of the innocent masses, fuelled by propaganda, corruption, paranoia, megalomania and greed.

Yet measures to contain them have been feeble. Unlike nuclear treaties, conventional arms control regimes focus on making sure weapons aren’t sold to ‘irresponsible users’ as declared by the USA as the main global manufacturer and exporter of arms, rather than promoting disarmament. This has seen the arming of Israeli occupation forces and the disarmament and blockade of Palestinian civilians fuelling the world’s longest running genocide.

Even within this narrower scope their efficacy remains unproven. The UN-led Arms Trade Treaty, the first global attempt at regulating the business, is only two years old. China and Russia are not signatories; USA has signed but not ratified, meaning the signature is non binding and does not count.

Together, these three countries account for more than 60% of global arms exports. Existing regional control instruments, such as the Conventional Armed Forces in Europe Treaty, have a patchy record of blocking controversial sales. In some regions, including Asia and the Middle-East, there simply are no such treaties. Meanwhile a sizeable increase in military spending in the US, as proposed by President Trump last week, may also prompt others to go shopping again. Expect arms trade shows, along with the arms trade, to now further boom.