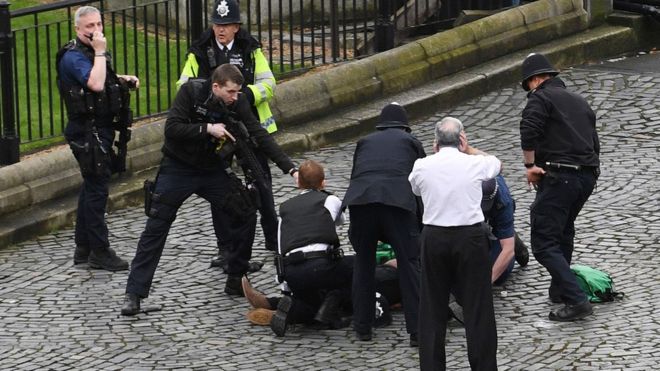 London Terror Attack | Yesterday’s terror attack on British Parliament in said to be politically motivated and not connected to Islam.

Four people have died and 40 people have been injured in a politically motivated terror attack at the Houses of Parliament in the British capital, London.

Details are still emerging as the UK government continues to hold it’s card close to it’s chest. State run news channels published the identity of an individual they claimed to be the attacker hours after the attack along with reports of follow up attacks, such reports were retracted as false including the identity of the attacker.

The attacks came on the same day that the British Parliament announced that Muslim passengers from six Middle-Eastern countries including British ally Saudi Arabia would no longer be allowed to use electronic devices including kindles and iPads on flights unless they paid an extra charge to hold the devices in the cargo, where they would not be covered by insurance.

There was wide spread suspicion that the attacks were staged as a means to justify the highly condemned new laws. However this has since been passed off as mere conspiracy theory. Far right Islamophobic groups were quick to jump into the media light and point blame at London’s Muslim population, which has also since been proved wrong.

A member of the UK SO15 unit, a highly trained specialist counter-terrorism squad spoke to Al-Sahawat Times on the scene yesterday under the condition of anonymity.

It is suspected by those investigating that the attack was politically motivated and not religiously connected. The attacker specifically targeted Police officers and Parliament, it is thought that British Prime Minister, Theresa May could have been the primary target. Suspected motives at this time are looking into foreign policy and police corruption and brutality.

What we know so far

At approximately 14:40 local time a vehicle drove over Westminster bridge driving into Police officers along the way. At least 3 Police officers in uniform were hit by the vehicle along with a number of civilians who were in close proximity to the officers.

The attacker then ran towards the entrance to Westminster Palace where the Prime Minister was currently addressing Members of Parliament, the attacker was armed with two kitchen knives.

Armed Police and arrived by helicopter and shot the attacker head with machine guns.

The London Eye was subject to an emergency stop during the incident leaving a large number of tourists trapped inside the glass pods high above the river Thames.

The Jubilee tube line at Canning Town on approach to Westminster was shut down minutes later  following a reported bomb scare. One of Al-Sahawat Time’s reporters was on the tube at Canning Town at the time. He told of tube trains being held stationary and a public announcement being played over speakers announcing “a serious security incident at the station”. The incident was cleared and people allowed to continue on their way after approximately 10 minutes.

A number of false reports quickly circulated on mainstream UK media fueling the panic and hysteria suggesting that a car bomb had been found outside of Parliament and other attacks close to Parliament. These proved to be untrue.

Helicopters and ambulances were quick to arrive and take the injured to near by hospitals including Guy Hospital near to The Shard.

Members of Parliament were locked inside during the attack with several posting mobile phone footage of MPs screaming and running scared when they heard Police open fire.

Prime Minister Theresa May was evacuated in a high speed armoured convoy.

London residence have been urged not to gather in Parliament square and to avoid political monuments.

Theresa May has said she will not be increasing the UK terror threat level from the current level of “severe” the next level up would have been “imminent”. The UK level has been at “severe” for many months.