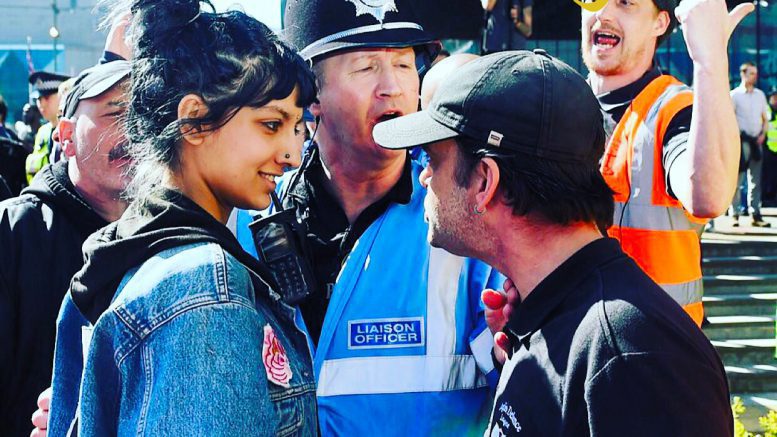 Yesterday saw the British extremist group EDL march on Birmingham, the second largest city in the UK, in a fascist rampage rioting in an attempt to remove Muslims and non-white people from the city. Bizzarly EDL are not banned in the UK despite essentially and simply being de facto evolutions of outlawed NF and BNP far right white supremacist extremist groups.

EDL was born out of the tiny city of Stoke-On-Trent, near Manchester. Stoke-On-Trent was voted the worst place to live in the UK 17 out of the last 18 years coming bottom in national leagues for income, corruption, police violence, racially motivated hate crimes, obesity, education and health.

UK born and raised, proud Brummy, second generation Bosnian-Pakistani girl, Saffiyah Khan said she felt compelled to step in when EDL leader, Ian Crossland and more than 25 of his aggressive and violent male supporters surrounded and attacked a lone woman wearing a hijab whilst police simple stood by and watched.

Saffiyah, who was not attending or participating in any rally or counter protests and was a simple passer by, witnessed the EDL protest in Birmingham yesterday and claimed police “did nothing” to protect the woman being attacked as they simply watched the large group of violent males attack the lone girl.

When Saffiyah stepped in, the gang of extremists turned on her and she was caught in a stand-off with Crossland which was caught on camera.

Saffiyah remained calm at all times, placing herself in the path of the aggressive males to protect the female stranger she was saving and simply smiled when threatened with physical harm and violence.

Saffiyah is seen stood with her hands in her pockets calmly looking down at irate Crossland who had his hands poking at Saffiyah’s face.

The image which immediately went viral was missaproproated many thousands of times despite the heroic actions.

This drew condemnation for inaccuracies and racism in itself, Saffiyah is British born and raised to a Bosnian Mother and Pakistani Father, many took offence that all British Muslims should be described as “Contemptuous and Asian” by the presenter.

“I’m a Brummie. This was happening in Birmingham. I am not a political activist. I wasn’t in a confrontational role, I wanted to keep a low profile. I wanted to look after her, because Muslims and people of colour are often abused. Nothing was really happening until the woman in a headscarf called an EDL member racist.”

“About 25 EDL people ran over and surrounded her. She looked absolutely terrified. I still hung back and waited for the police to sort it out. I waited two or three minutes and but the police did nothing, so I decided to go and try and get her out of there. It all happened very quickly. She left, but then The group turned on me. Ian Crossland was poking his finger in my face, but I just stood there. I didn’t do anything, I wasn’t interested, that wasn’t my intention. I couldn’t understand what was being said though to be honest, it was all very mumbled. I wasn’t scared in the slightest. I stay pretty calm in these situations. I knew they were trying to provoke me, but I wasn’t going to be provoked. I was just holding out. Then I was just pulled out of there. I have lost my anonymity because of the picture, but on balance it was worth it.”

“I have probably been profiled by them now.”

Police offered Saffiyah no assistance or protection other than one photograph by the Associated press showing a Police officer catching the fist of EDL leader Ian Crossland as he attempted to punch Saffiyah in the face after repeatedly poking at her face with his finger. Crossland was not arrested for assault, or any other charge. Birmingham police hav come under extreme criticism over the incident which has been called clear consonance of violent racism and violence towards women.

Meanwhile Birmingham Central Mosque opened its doors to people of all religions and ethnicities for a ‘Best of British’ tea party in response to the EDL protest.

EDL switched their demonstration from the East Midlands to Birmingham after the Westminster terror attack , to highlight what it claims as a “continued increase in Islamic terrorism” linked to the city. Even though the Westminster attack was politically motivated and not connected to Islam.

Muhammed Afzal, Birmingham Central Mosque’s chairman, said communities in the city would remain united irrespective of their religion or race.

“When the English Defence League is rioting and trying to divide the community, we are holding this party just to prove to them that Birmingham is a multicultural, multi-ethnic and multi-faith community.” Afzal said.

West Midlands’ Police and Crime Commissioner, David Jamieson attended the party and claimed EDL was bringing “nothing more than division” to the region.

EDL riots have in the past seen severe injuries and city centres completely destroyed. In many countries EDL is listed as a Terrorist Group with members banned from entering the country. 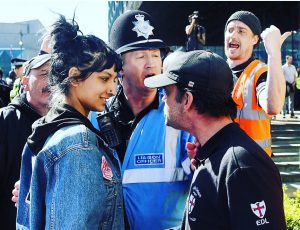