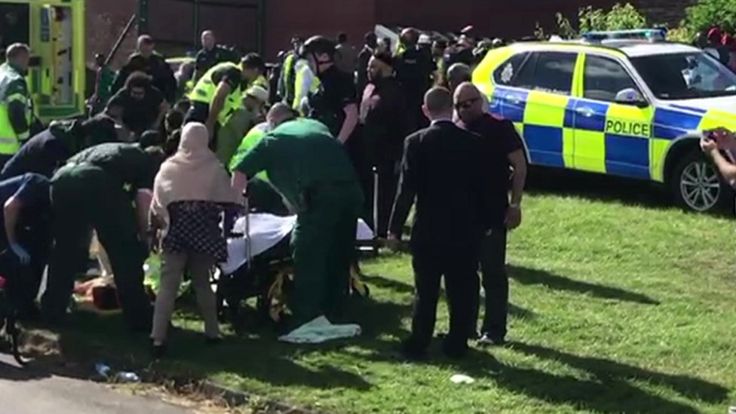 The UK woke this morning to yet more tragedy as less than 2 hours ago the UK suffered it’s 6th tragedy in only three months.

With the Manchester bombing and 3 terror attacks in London including a far right terror attack on a  North London Mosque, followed by the non-terror related tragedy of a tower block in Kensington, West-London burning down as 600 residents slept, this latest tragedy is likely to dampen the already sombre national spirit.

Six people, including three children, have been injured when a car mounted a kerb and ploughed into a crowd of worshippers in Newcastle, UK.

It happened at about 09:14 BST outside Westgate Sports Centre where an event was taking place to celebrate Eid.

One of the children is said to be in a  critically condition. Northumbria Police said the incident was believed to be an accident.

A 42-year-old woman was arrested and is in custody, police said.

Hundreds of people were at the event to mark Eid al Fitr, the end of Ramadan.

One eyewitness said: “From what I understand, [a woman who had been at prayer] was about to leave in her car and I believe she lost control.”

“I ran up straight away because everyone was moving in on all the injured, trying to put water in their mouths. The parents of the kids were there, I had to sort of try and calm them down just to tell them the ambulance is there and they will take care of it; they know what they’re doing.”

“It caused a lot of panic; everyone was screaming when it happened, it wasn’t the best of experiences.”

A North East Ambulance Service spokesman said: “We received our first 999 call at 9.15 this morning to report a car that had mounted the kerb. We have taken six people to hospital; they have gone to the Royal Victoria Infirmary in Newcastle; three children and three adults.”

Chi Onwurah, Labour MP for Newcastle Central, tweeted: “So sad, I was at the prayers earlier & there was so much joy & unity. Thinking of those affected by what I am told was terrible accident.”

Initial media reports suggested that the accident may have been a terror attack but such rumours where swiftly swept aside by the emergency services.