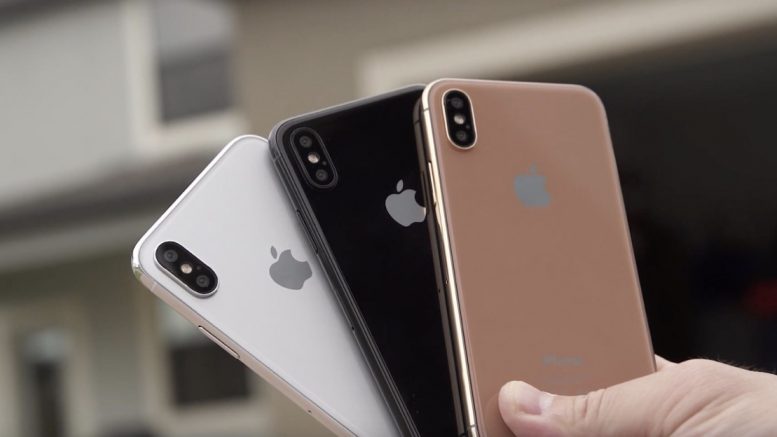 Only three bold choices of colour for Apple’s iPhone 8

All black, all white or gold

Recent video leaks of the models Apple have given to accessory designers have claimed that the upcoming iPhone 8 will be available in just three colour choices: all black, all white, and a new shade of gold.

While nearly every leak we’ve seen has been of the black model, a new video today from YouTuber Danny Winget offers a look at all three choice.

Winget  has gotten his hands on dummy units of all three new colors. Both the all white and gold models feature a white front side, whereas the black model is entirely black.

While some reports had previously claimed the iPhone 8 would not come in white, a throw back and nod to the early days of Apple’s first iPods which were only available in white gloss a small where the old MacBooks of the early 2000s, a more recent analyst note from KGI’s Ming-Chi Kuo stated that the device will come in three colors, one of them being white.

An earlier report also stated the iPhone 8 would come in a new mirror-like color variant, but we haven’t heard anything about that since and no accessory designers are making products for this colour option.

Whilst in the Middle East Apple devices in gold vastly out perform any other colour in the west the black (in particular mat black) dramatically out sells all other colours. So it seem logical that for their 10th anniversary of the iPhone Apple would keep the two best selling colours and add in the original colour. (Yes iPhone 1 was mat silver and black, but iPhone 3G, 3GS, 4, 4S and 5 were only available in Black or White. iPods only came in white with black being added as a second colour. The iPhone 5C came in a wide range of plastic colours, 5S saw the addition of gold and space grey, (5)SE saw space grey dropped and black dropped, 6s and 6S plus saw the addition of (pink) rose-gold and the 7 and 7 plus saw the additions of red, gloss black (jet black) and mat black. Gold wasn’t launched as a limited colour intended to only be available on new devices for the first three months after release date. On Apple’s website older models are not sold in gold at all, a trick lost on Apple’s western clientele but bought into on a large scale by Middle Eastern consumers.

The iPhone 8 is expected to be officially announced and released in just a couple of week’s time, with a very limited number having been pre-reserve some in black, white and gold.

As Apple’s 10th anniversary iPhone, the device is likely to feature wireless charging, as well as fast charging when used with a USB-C Lightning cable.

Other new features include an OLED display, augmented reality capabilities, camera improvements, face recognition, and a few more surprise additions, and dare we say it losses.

The iPhone 8 or I Phone Edition as it is likely to be called to match the new extortionately prices Apple Watch Edition is posed to be a bank breaker with base modes coming in at $1’500 USD but remember that Apple operates a 1:1:£:$:€ exchange rate so customers in the state are likely to see prices as much as 25% cheaper than in the UK and Europe.

The Apple Watch Edition has a base model in the smallest size with no additional extras coming in at an eye watering $1’300 USD (£:€:$:1:1)

Patented features such as a finger print scanner behind the screen and Apple Watch it it’s own SIM card and data plan were not able to be implemented in time for the 2017 10th anniversary deadline. Features cheaper rivals have already started to implement. (All be it with some dubious patent infringement work arounds).

This means either Apple has scrapped those plans or will implement them for the 2018 release of the iPhone 8 or 8s (assuming the new iPhone is called the iPhone Edition).