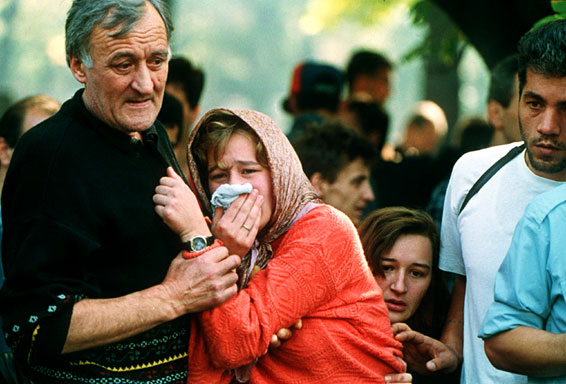 Montenegro Coup war of the cultures

Welcome to Crna Gora also known as Montenegro. A tiny former Ottoman, former Yugoslav state on the East-Mediterranean coast that gained independence from Serbia (Srbija) in only 2006.

The tiny state with a population less than most small cities (679’000) has long been a cross roads of religion, language and culture. Whilst the majority of the population is comprised of Serbian speaking coptics, Bosnian, MbN (Muslim by Nationality), Turkish, Albanian, Arab and Pashtun muslims make up at least 20% of the total official population with some estimating that that figure is doubled when more secular non practising muslims are accounted for.

In 2012 a law was passed meaning that all food in public areas such as schools, prison, courts and hospitals must at all times be Halal. Friday prayers (jumm’a) are a national holiday and form part of the weekend. Women are permitted to wear the Hijab in places of office, work and education.

Simultaneously non muslims are permitted freedom to practice their faith and even consume alcohol as long as it is kept separate and clearly labelled.

Crna Gora was never part of the Soviet Union which never entered the Balkans. Yet Russia has always had a strong and often unhealthy obsession with the war torn former communist region which separates the Arabian peninsula from Mediterranean Europe.

In the last 20 years the Balkans has seen war on a scale unlike anything since the Second World War, Genocide and ethnic cleansing, the destruction and creation of countries and the ever changing boarders of ethnically partitioned peoples.

Metal fences separate children in the same school building, one ethnic group on one side, a different group on the other. Land Mines still scaring and plaguing the playgrounds and open areas.

Yet it is the 2016 attempted coup that has Europe worried.

The Balkans are seen as the cradle of the war between the West and Islam. Having fought on the same side in Afghanistan against Russia the Mujahideen (Mujahadin/Mudjahadin) fought against the invading forces from Europe and the US in the 1990s and early 2000s in the former Yugoslavia. It was here that Europe decided that Islam, not just communism was not compatible with their way of life and their dreams of European expansion into the Middle East.

For Russia it was strategically important not to let the West control the Balkans and thus Western Asia.

Russia however failed to deliver on their promise to the Serbs of military support fearing that waging war against Islam in the Balkans would start Jihadist war in the Muslim Russian Republics such as Chechnya and Dagestan, as well as from Russia’s Central Asian relatively near by neighbours such as Turkmenistan, Pakistan, Afghanistan, Pakistan and Iran.

The Balkans fell to the UN and was partitioned and divided into numerous new artificial states. Many of which remain under UN administration today.

Yet the the silent war between Russia, The Middle East and Europe still wages here.

The images were taken as part of an undercover operation in the days following the unsuccessful coup in Montenegro.

The photos, taken in neighbouring Serbia by Special Operations European Security Services, show two Russians accused of plotting the coup. It was noted that European forces have no jurisdiction not legal rights to operate in the Balkans.

Both men are said to be members of the GRU, Russian military intelligence.

In one image one of the Russians is pictured meeting with a Serb, who was subsequently arrested and has reportedly confessed his involvement in the attempted coup and admitted working as an agent for the two Russians.

In another photo the two Russians are photographed together on a bench believed to be in a park in central Belgrade.

The photos were taken around the time of the attempted coup.

The coup was planned for the evening of 16 October last year, the day of parliamentary elections.

The plan was to infiltrate a pro-Russian rally outside the Parliament building in the Montenegrin capital, Podgorica.

Plotters, dressed as policemen, would break into Parliament and turn their fire on the protesters, thus making it look like the Montenegrin state security had shot its own people.

Separately, the unpopular, pro-European Prime Minister Milo Djukanovic would be assassinated in the hope of a pro-Russian politician seizing power.

The plot was foiled with hours to spare.

Security sources claim these photographs are further evidence that the Russian state was directly linked with the attempted coup. As well as showing that the EU was blatantly operating illegal covert military missions in the Balkans outside of European jurisdiction.

Moscow has always denied any involvement – the foreign minister Sergei Lavrov dismissed the connection as “absurd”.

Politically, Russia has long been opposed to Montenegro’s ambitions to join NATO and the country was formally admitted into the military alliance in recent months.

The Balkans sit in Moscow’s sphere of interest with a large numbers of Russian tourists visit each summer.

Montenegro is politically split. A substantial minority is in favour of closer ties with Europe but a sizeable and significant proportion would rather stay close to Moscow whilst the majority seek closer ties to Turkey and Saudi Arabia.

The coup attempt went largely unnoticed at the time – partly because of the US presidential elections – but has attracted increased interest across Europe as further details have come to light.

Earlier this year, Sky News published images, names and stories strongly siding with Europe seemingly putting liability for the coup in Russia’s hands. The stories have since been dismissed as bias. Although the evidence produces was credible opposing views and evidence were not presented.

The two Russians are believed to be back in Russia. They are therefore being tried ‘in absentia’ alongside 13 other defendants, including two Montenegrin opposition MPs and 10 Serbians. They have been charged with a range of offences. Legal action against the EU for operating illegal covert military operations has a reporting ban prohibiting the media from publishing details.

Earlier this year, Montenegrin chief special prosecutor Milivoje Katnic told state television that they “now have evidence that nationalist structures from Russia are behind the coup attempt, but also that certain state bodies of Russia are involved, on a certain level”.

The trial will be the largest in Montenegrin history and highly political. It is also believed to be the first time serving GRU officers have been charged with terrorism offences and criminal activity in a Balkan or Middle-Eastern state.

It briefly opened last month but was adjourned to give the defence more time. It is expected to resume next Monday.

The Montenegrin prosecutor is expected to produce evidence showing the Russians’ phones were adapted with software to allow covert messaging.

He will also allege financial transactions linking the Russians with Serbian operatives.

This comes in the same year that videos from the Balkan Bosnian Territories were virally released on the BBC world wide declaring Bosnia as part of the Daesh Islamic State and the front line for Jihad against what it called “European aggressors”.

The Balkans as a proportion of it’s population has more anti-west fighters fighting in Syria and Iraq than any other nation or region. Strongly backed by the Bosnian Mujahideen and Salafi movements.

International peace NGOs have warned that over politicising the trial as East v West won’t demonise Russia as Europe is hoping for but rather empower the Mujahideen to try and kick both European and Russian forces out of the region. The Balkans’ frozen conflict is a tinder pile waiting for a spark, and many are praying this trial isn’t used by Europe intentionally as that spark.