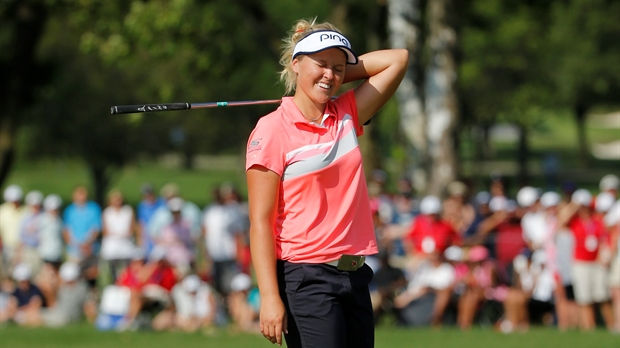 Teenager Brooke Henderson hit a course-record eight-under-par 63 in the third round to move three shots off the lead at the Canadian Pacific Women’s Open.

The 19-year-old Canadian, who is a member at the Ottawa Hunt & Golf Club, site of this week’s LPGA tournament, had no bogeys to reach a tournament tally of seven under.

Denmark’s Nicole Broch Larsen (66) and Mo Martin of the United States, who shot 67, lead on 10 under.

South Korea’s In Gee Chun, a four-time runner-up this year, is nine under.

In Gee, the overnight leader, carded a one-under 70, while compatriot Mirim Lee shot a 66 to move to eight under alongside American Cristie Kerr (68). England’s Holly Clyburn shot 71 and remains at 5 over par.

Henderson, who is among six players tied at seven under, said it was “the perfect day” after she birdied the final two holes to better the 64 scored by Yani Tseng at the 2008 tournament.

She added: “I hit the ball extremely well. Mentally I was right on. I felt in the zone, as a lot of athletes call it. Everything was going right. I hit the ball really well. I made a lot of putts and that was really key for me.”