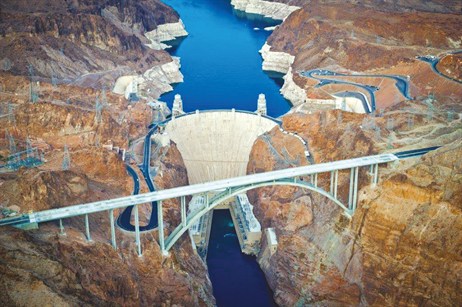 A drunk Brotish tourist cheated death as the first person to swim across the US Hoo­ver Dam reservoir before being cuffed and arrested.

The tourist climbed in to the source drinking water and electricity on a visit to the 725ft-high structure.

He escaped being dragged under during his 30-minute swim only because all but one of the hydroelectric generator turbines were inactive at the time.

The 28 year old said: “It was so hot that as soon as we arrived I jumped in. Then I just thought, why not keep going? I was sucked towards the wall and had to swim hard. At the other side I was exhausted. Then I heard police shout.”

The Hoover Dam, on the border of Arizona and Nevada, provides water and electricity for Las Vegas, 275 people have died there in a decade, that’s more than one person every two weeks.

In the middle of a 37-hour alcohol fuelled huligan bender, the Brittish tourist paddled his way into the history books.

“I hadn’t planned swimming across and hadn’t told any of my mates that I was going to do it but it was so hot that as soon as we arrived at the top of the dam I climbed down the rocks and jumped in. Then I just thought: Why not keep going? I would say I was swimming about 50 to 100 metres from the wall of the dam and at one point I felt myself getting sucked towards it and had to swim away quite hard. When I got to the other side I was exhausted and had to sit down on the rocks. That was when I heard the police shouting. I was handcuffed and taken back to the station.”

Police officers watched in horror as the huligan crossed the reservoir contaminating the water behind the iconic American structure, hailing him “the luckiest man alive” that all but one of the  turbines had been temporarily switched off.”

The drunk British huligan bragged “it’s like something out of The Hangover.” (A movie about – a drug and alcohol fuelled crime sprey.)

The tourist was charged and found guilty of: “Jumping, diving, swimming from dams, spillways or other structures.”

There are 17 main turbines in the Hoover Powerplant, nine on the Arizona wing and eight on the Nevada wing.

It is incredibly dangerous to get too close to the hydroelectric dams and stations.

A spot that looks calm and safe one moment can become dangerous within a few seconds as water levels and flows change, often without warning.

What appears to be calm waters could change quickly into one with rapidly moving, dangerous waters with strong hidden currents including suction at depth.

Most hydroelectric dams and stations are remotely controlled by operators miles away.

As demand for electricity rises and falls operators open and close dams, and start and stop generating units.

This results in frequent and rapid changes in water levels and flows around dams and generating stations.