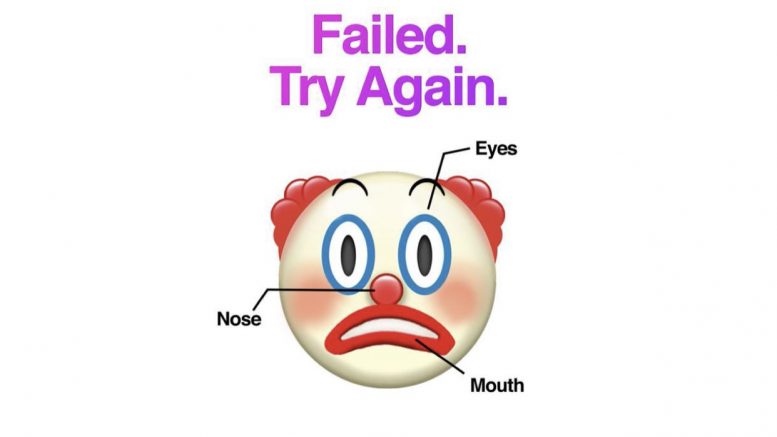 Huawei has taken to trolling Apple in a new ad that pokes fun at the iPhone (10) X’s neural engine and urges people to wait for “the real AI phone”  a reference to its upcoming flagship smartphone, the Mate 10, set to debut next month.

The short ad takes aim at Apple’s Face ID feature on the new iPhone X, and uses a jaunty clown emoji animation on a smartphone display to imply that unlocking the device using facial authentication is prone to failure.

At the public lauch launch of the iPhone X at the Apple headquarters in California USA, the iPhone X Face ID failed sparking an instant drop in the value of Apple shares.

Although not confirmes it appears that reflective coatings coatings such as grease, make up, moisturiser or sweat, bright lighting or bad angles mean the Face ID doesn’t work.

The use of Face ID as a replacement for Touch ID for Apple Pay has also given rise to security concerns as you now may automatically pay by looking at your phone which may lead to accidental payments it is feared. Apple has refused to comment on payment system concerns.

The vasts majority of online reviews from the likes of “iJustine” and “EverythingApplePro” recommend using the iPhone 7plus and avoiding the iPhone X, 8 and 8 plus until the improved 2018 models are released.

The tagline accompanying the ad reads, “Let’s face it, facial recognition isn’t for everyone. Unlock the future with #TheRealAIPhone. 16.10.2017”. Apple famously had to defend itself against doubts about Face ID after a live onstage demo of the technology appeared to backfire.

As reported previously, Huawei’s Mate 10 is the first phone in the company’s line-up to feature the Kirin 970 AI mobile chipset, which has a built-in neural processing unit that utilizes machine learning, making it “20 times faster” than a traditional processor, according to the company.

The Kirin 970 is based on the same 10-nanometer technology as Apple’s latest A11 Bionic processor found in the iPhone 8 and iPhone X. Like the A11, the new Huawei chip is also said to be more energy efficient, especially when it comes to handling AI-related functions such as image and voice recognition.

Huawei surpassed Apple’s global smartphone sales for the first time in June 2017 according to analysis by consulting firm Counterpoint Research,

Overtaking the U.S. tech giant as the world’s second biggest smartphone brand. This appears to have boosted the Chinese mobile maker’s confidence that its Mate 10 is the genuine frontrunner to rival Apple’s flagship smartphone, particularly in a Chinese market dominated by inexpensive, high-spec alternatives. The iPhone X is set to cost the most in the UK with the average global retail price coming in at $999 USD but $1’625 USD in the UK. This is partly due to Brexit and party due to Apple’s artificial exchange rate which highly devalues the GBP by as much as a third. The devaluation was set immediately after the Brexit vote in 2016.

Al-Sahawat Times recommends the iPhone 7 plus as the best phone of 2017 to date with the Mate 10 the device to watch.

The 32 GB model is really only sufficient for light users and users who heavily utilise cloud storage.

The 256 GB mode is really only needed by the heaviest of users and those who do not use cloud storage at all.

The 64 GB model is really quite likely to be insufficient for most users’ needs.

Samsung S8 Plus, Huawei Mate 10, One Plus 5, iPhone X are all top quality devices but not without their issues and drawbacks. The Huawei Mate 10 is not in our top 3 simply because we have not been able to physically test the device yet and do not know how reliable it will be. The One Plus 5 whilst great on paper had some reliability issues whilst the iPhone X has overwhelming design problems the device is small for those with large hands, the screen is narrow meaning media content is cropped and your usable screen therefore smaller than the iPhone 7 Plus and 8 Plus, the cut out also interferes with several apps, there are security concerns and reliability concerns also over Face ID. All in all for the price we do not think the iPhone X is worth the investment this year, you are better waiting until the 2018 model.

Samsung remains plagued by battery issues such as battery dumps where the phone seems to empty the remaining 15-50% of the battery all at once with batteries and phone life span being the shortest of any of the devices we tested. It isn’t worth noting that millions world wide use Samsung without battery dump issues, if you are unlucky enough to have a problematic one however, the device becomes unusable after a relatively short period of time for us this was after 6-10 months of real world testing.

The standard sized iPhones are tricky to handle due to their small size and lack specs available on their Plus size brothers. As such we can’t recommend using a standard size iPhone at all.

Whilst the iPhone 8 Plus has several new features and improvements over the 7 Plus they device is a little larger and heavier although most will not be able to notice, but the device is costly. So it is a case of are the incremental upgrades worth the cost. Fast charging is only usable if you pay extra for a specific iPhone 8 charger, not included with the device, this is also true of wireless charging. Over all we felt that the improvements did not warrant the price hike as such for day to day living the more sturdy metal design of the iPhone 7 Plus was seen as better value for money than the all glass iPhone 8 Plus.