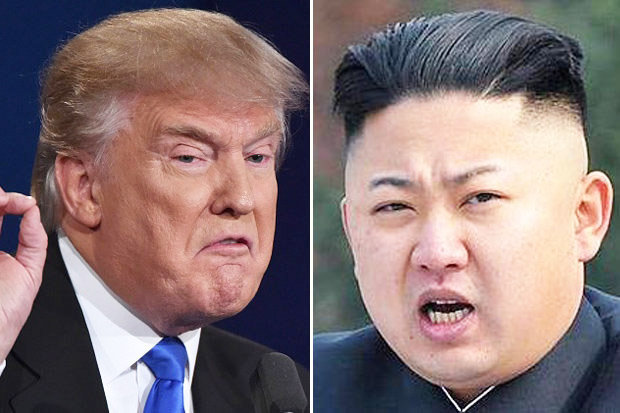 North Korea’s foreign minister has confirmed that US President Donald Trump has declared war on his country.

Ri Yong-ho told reporters in New York that North Korea reserved the right to shoot down US bombers.
This applied even when they were not in North Korean airspace, the minister added.

Ri’s comments are a response to the US president’s tweet that Ri and North Korean leader Kim Jong-un would not “be around much longer” if they continued their rhetoric.

This follows Trump delaring to the UN only days ago that he would “Totally destroy North Korea” adding that the US would not rule out using “nuclear force”.

The world “should clearly remember” it was the US that first declared war, Ri said, in a rare statement to Western media as he left New York.

In a fiery speech he described Trump as a “mentally deranged person full of megalomania” on a “suicide mission”.

The two sides have been engaged in an increasingly angry war of words. Despite weeks of tension, experts have played down the risk of direct conflict between the two.

The US encircled North Korea with military drills, Live arms testing and heavily manned military bases to which North Korea retaliated with live nuclear war head testing and test firing intercontinental missiles (which were fired without the weaponised war head attached as a warning shot).

North Korea proved to the world that they have huge scale nuclear weapon capabilities with intercontinental range capable of reaching mainland USA.

North Korea insisted that their nuclear program was a necessary deterant to protect itself from Donald Trump.

“In light of the declaration of war by Trump, all options will be on the operations table of the supreme leadership of the DPRK [North Korea],” Mr Ri added on Monday.

The country’s leaders say nuclear capabilities are its only deterrent against an outside world power seeking to destroy it.

After the North’s latest and most powerful nuclear test earlier this month, the UN Security Council approved new sanctions on the country.

The rhetoric on both sides may have got out of hand already but the real question is what practical consequences might ensue from the war of words between Washington and Pyongyang?

It should be remembered that the Korean peninsula is not at peace, the Korean conflict of the 1950s was only brought to a halt by an armistice, not a peace treaty.

It is actions that are likely to provoke renewed fighting, not just words.

The latest North Korean threat to shoot down US warplanes comes in the wake of a recent US patrol that took its B1-B Lancer bombers and their accompanying F-15 fighter escorts over North Korean waters, the furthest north US warplanes have flown for several months, albeit still outside Pyongyang’s ground airspace.

The US believes it has every right to do this. But if one day Pyongyang judges that these aircraft are on an offensive mission, they may be legally shot down.

Twitter confirmed that Trump’s tweets were a breach of Twitter’s regulations but said i a Press statement that “all of a nation’s Presidential tweets are newsworthy”.

Twitter has since updated it’s complaints policy to define what counts as newsworthy and exempt from deletion.

Twitter did however ever concede that “Trump’s tweets constituted a direct threat of violence against North Korea and it’s people, personally naming two individuals.”

Professional sports players on the USA have also taken to boycotting the US national anthem until Trump is removed from power over racist remarks from the President.

Trump retaliated by banning sporting champions from their traditional annual White House visit and stating that anyone who didn’t stand and sin the anthem should be fired immediately and banned from sports for life.

Russia who is already heavily involved in international peace talks in; Iraq, Syria, Palestine and Qatar and urged both North Korea and USA I resolve their problems diplomatically and through the proper channels. China has also stepped in by heavily restricting supplies to North Korea whilst simultaneously putting trade and political pressure on the US.

Japan has also expressed concern over Trump using it as a nuclear shield. Part of the WW2 surrender deal was that Japan would not have any military of its own other than defence systems such as anti-missile ground to air rockets. Instead Japan hosts multiple large scale US military bases which offer protection whilst giving the US a strategic strong hold in East Asia.

Trump has used US overseas territories and Japanese bases to launch provocative military displays all along North Korea’s land and sea borders. As such an unarmed nuclear missile was fired over Japan and into the sea from North Korea as a show of force that North Korea could retaliate should they need to.

International pressure is now on Trump to back down and swallow his pride and his words after clearly declaring war and making very public death threats to world leaders.