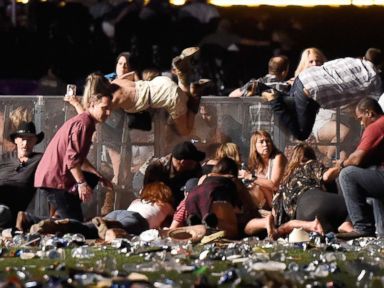 Las Vegas, the desert city of excess, temptation and tourism, today morns the worst ever gun attack in US history.

The tack totally eclipses the 2016 Daesh Attack which killed 49 and until today was the worst mass shooting in the history of the USA.

A gunman in a high-rise hotel overlooking the Las Vegas Strip opened fire on a country music festival late last night (local time), shooting at least 586 people of which which 59 have so far died. Many other remain in critical condition with a number of people still missing in the deadliest mass shooting in modern American history.

The gunman, identified by police as a white, Christian male ahed 64. His name is being with held by Al-Sahawat Times although published by other media outlets out of consideration and safety concerns for his family. The gunman was shot dead by officers in his hotel room on the 32nd floor of the Mandalay Bay Resort and Casino, Sheriff Joseph Lombardo said during a news briefing Monday (local time).

There are conflicting Officer reports as to whether or not the gunman took his own life or was shot by police. It is not believed that he opened fire on police inside the hotel.

Under the neon glow and glitz of the Vegas Strip, thousands of concert goers who had gathered for a three-day music festival dove for cover or raced toward shelter when the gunfire began about 22:00 Sunday local time.

Police said more than 22’000 people were at the concert when the firing began, round after round, shooting from an elevated position that left those on the ground as exposed targets.

Police believe the attacker, a local resident, was a “lone wolf” attacker.

Lombardo did not give further details on the man, saying that police “have no idea what his motivation was.”

“I can’t get into the mind of a psychopath,” Lombardo said during a later briefing Monday. He also said given that police believe he was the sole shooter, “I don’t know how this could have been prevented.”

42 guns, many modified to be fully automatic, thousand of rounds of ammunition and a plethora of explosives were found on the attacker.

The fact the man had managed to sneak enough weaponry to fuel a small war into the hotel has raised serious concerns over what has always been one of the most secure cities in the country.

The brother of the attacker told the press that he had shown no signs and no motivation, he had acted perfectly normally in the days leading up to the attack, he was a multi millionaire who made his fortune in real estate investments. His brother also said that he showed no signs of being a gun enthusiast as is deeply shocked and disturbed by the events and the arsenal of the attacker.

Why have numbers risen so much?

Initial reports showed the death and injury toll to be only a fraction of what the current tally stands at, so how and why have the numbers risen so dramatically in the last 24 hours?

The panic lead to a stampede and people fleeing without checking out of their hotels. The volumenof injuries overwhelmed emergency services who did not have the time to fill out all of the paperwork and reports whilst trying to save so many lives. The reports are still being analysed and recorded meaning that the figures will still continue to rise further.

The weaponry and explosives found including modified, fully automatic military grade guns and ammunition along with high capacity explosives. It must therefore be assumed that he intended to kill all 22’000 attendees of the festival. His arsenal, military experts confirm, was “easily capable of eliminating the entire list of festival goers.”

Police believe the attacker smashed the window of his room with something similar to a hammer before he began firing at the people below.

His brother and their mother have been assisting the FBI, the family are deeply upset and shocked.

His brother told Al-Sahawat Times:
“Our mother said, ‘I don’t understand why my son did this.’” Monday morning outside his home in Orlando, Florida.

While his brother had a few licensed handguns, he was shocked by the weaponry police described in Las Vegas.

He said he did not know of his brother having any mental illness, alcohol or drug problems not affiliations to any group, gang or organisation.

When he spoke to the FBI, he showed FBI agents three years of text messages from his brother, including one that mentioning winning $250’000 at a casino.

An early suggestion of a large gambling loss has been ruled out at this stage.

The woman the attacker was in a retail shop with and lived with has been ruled out as a suspect or being involved or aware of his plans by FBI investigators who raided the house.

The gunman had no criminal record or record of mental illness or instability.

“We have no investigative information or background associated with this individual that is derogatory.” the sheriff said. “The only thing we can tell is he received a citation several years ago; that citation was handled as a matter of normal practice in the court system.”

Citations in US law can range from crossing the road without using a designated crossing, known as “Jay Walking” to parking tickets or speeding tickets.

“We have determined, to this point, no connection with an international terrorist group,” Aaron Rouse, the special agent in charge of the FBI in Las Vegas, said at a news briefing.

Flights were grounded around round the city airspace do several hours as the FBI ruled out accomplices.

It is believed that the rapid rate of fire was mistaken by many victims as fireworks, a mistake that cost some their lives.

An intensive cross-agency security review is due to begin as a result of the attack with the authorities for ammunition regulation arriving on the scene today.