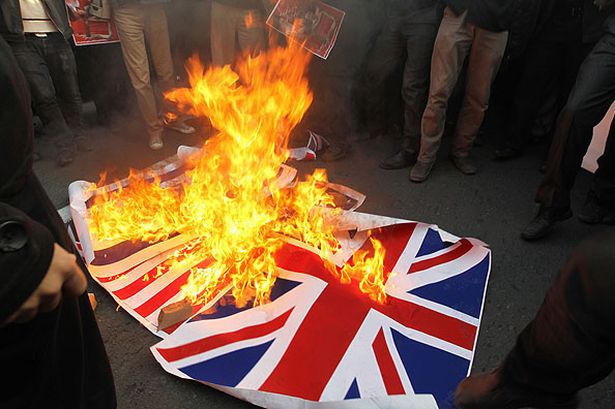 A Christians Bishop on the picturesque Greek island of Rhodes has banned foreign couples from getting married on the island after the lewd antics of a British couple took the row over “perverse and lewd Brotish behaviour” over the edge.

Hundreds of other foreign couples could have had their wedding plans cancelled after a British couple staged a photograph as part of their portfolio of wedding photographs, in which the couple stripped half naked and performed a sex act.

The couple posted the photograph on Facebook, where it was quickly shared by thousands of people.

Greek islanders have complained for years over the behaviour of both drunk and sober British tourists, a complaint echoed across the Mediterranean where millions of British expats live and millions more go to party in the sun.

“We are Greek and we cherish our traditions and the sanctity of our religious sites,l.” community leader Giorgos Eleftheriou said “We cannot allow this disgusting behaviour to prevail.”

Eleftheriou, who performed the couple’s ceremony, added: “Shame on those two for the damage they have done. Would they have done the same in their homeland; in front of a British chapel, a Jewish temple, a Muslim mosque? I have hundreds of soon-to-be brides from Britain and all over the world calling me today in tears because of this decision. It’s a huge damper on our society here. We are one of the most famous wedding destinations in the world and we are booked solid through to 2021.”

After the photograph spread through the British press, it was shown on Greek television and in their newspapers. Turkish, Balkan and Arabic media refused to offer publish the image due to its nudity and sexually explicit content.

A local resident told the press “It defiled the church. The situation was really that the local priest and church and the mayor had no choice but to say that there will be no further weddings, 99 per cent of the weddings are British. People are outraged and talking about suing the couple involved. They want the couple to publicly apologise to Rhodes and particularly the church.”

Anti-British immigration and anti British-tourist protests have been seen in Greece, Turkey, Tunisia. Italy, UAE and Spain this year over the behaviour of Brits abroad and the hypocrisy of their domestic immigration policies.