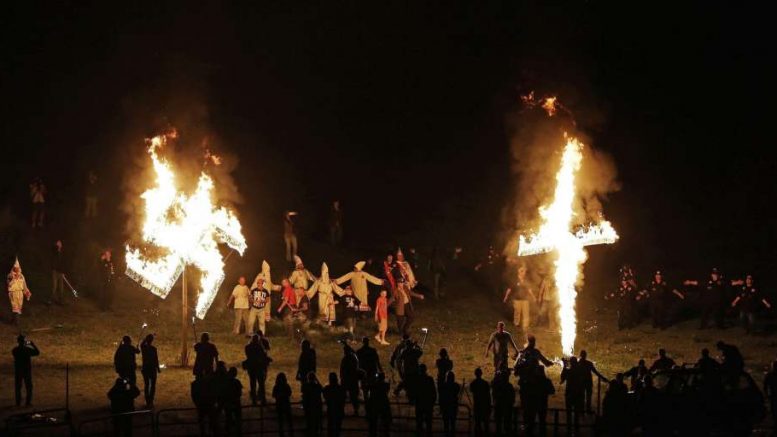 One-in-four serving US military personnel reported seeing serious examples of white supremacism and far right extremism within their ranks and consider it more of a threat to national security than extremists such as Daesh, whom they have been battling in Syria and Iraq, according to new federal intelligence.

The Intelligence was released after a neo-Nazi-led riot in Charlottesville, Virginia, resulted in clashes with anti-fascist demonstrators and the death of a young woman. A young man from Ohio, said to be an admirer of Hitler, has been charged with her death.

Donald Trump was criticised for his slow, shifting response to the violence, seeking to claim there was blame on “many sides” and “good men on both sides”. Many bro-Nazi groups have since adopted Trump as the face and endorser of their cults.

Yet senior leaders from all branches of the military spoke out to say that threats or discrimination against minorities, did not fit with the values of national service the military sought to espouse.

Concern about white supremacism was most pronounced among soldiers of colour, the commissioned survey managed by the Military Times found.

A staggering 42 per cent of non-white troops who responded to the survey said they had personally experienced examples of white nationalism or with supremacism, in the military.

When asked whether white nationalists posed a threat to national security, 30 per cent of respondents labelled it a direct and significant danger, more than many war zones such as Syria (27 per cent), Afghanistan (22 per cent) and Iraq (17 per cent).

Some polled were angered by the decision to challenge white supremacist groups. “White supremacy is not terrorism,” wrote one Navy commander, who declined to give his name.

Another commenter, an Air Force staff sergeant, wrote: “You do realise white supremacists and racists are two totally different types of people?”

More than 60 per cent of troops who took the survey said they would support activating the National Guard or Army Reserves to handle civil unrest arising from white nationalist events such as the clashes in Charlottesville in August.

The US, British and Dutch troops were found guilty of war crimes including; torture, rape and white supremacist terrorism in many territories including: Iraq, Syria, Bosnia, Kosovo, Afghanistan, Cuba (Guantanamo).