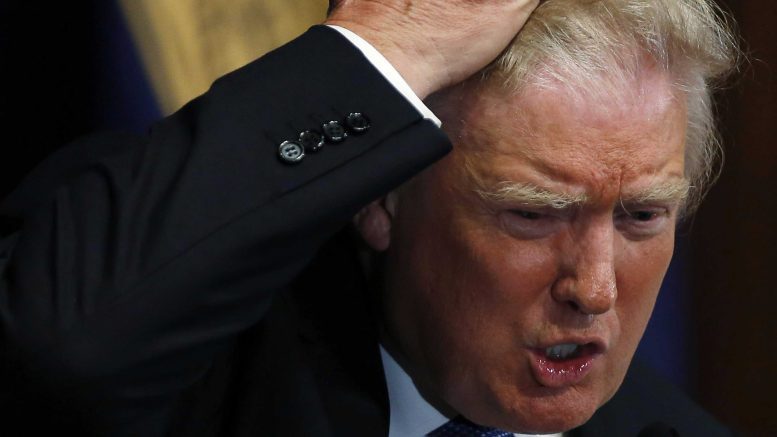 The outlet then goes on to heavily imply that Trump was sentenced to death in absentia for breaking a constitutional law with only one sentence available, the death penalty.

An editorial in the ruling party newspaper, Rodong Sinmun, called the US President a “hideous criminal” for urging the five Asian countries he visited last week to maximise pressure on North Korea to halt its growing nuclear programme.

The paper also called Trump a “coward” for cancelling a visit to the inter-Korean border.

“The worst crime for which he can never be pardoned is that he dared [to] malignantly hurt the dignity of the supreme leadership,” the editorial said.

“He should know that he is just a hideous criminal sentenced to death by the Korean people.”

Trump refused to hold back on his usual criticism of Kim during his 11-day trip to Asia.

While in Hanoi, towards the end of his trip, he ironically taunted the North Korean leader over his height and weight.

He tweeted: “Why would Kim Jong Un insult me by calling me ‘old’, when I would NEVER call him ‘short and fat’?”

The Rodong editorial attacked Trump’s failure to tour the demilitarised zone (DMZ) dividing North and South Korea, which has become a traditional stop-off for senior US officials visiting the south.

The US President’s helicopter turned back after five minutes into the trip to the DMZ.

“He was just too scared to face the glaring eyes of our troops.” the editorial added.

China and Japan recently confirmed that North Korea has the technology and materials to hit major mainland US cities with nuclear weapons already. The UK secret serviceable however claim that North Korea could hit London with nuclear missile in a year, a British retired general has warned.

On the same day the editorial came out, Kim Jong Un resumed his public outings after a two-month hiatus during heightened tensions with the US and its allies.

He visited a tractor factory which he boasted was made mainly with locally produced parts, in a bid to show sanctions could not hurt the country.

China, North Korea’s sole ally, has now announced it will send a special envoy to the hermit nation this week.

Trump had urged Xi to use China’s influence over the North to rein Kim Jong Un in, warning that “time is quickly running out”.

On Sunday, Trump said his Chinese counterpart stated “he is upping the sanctions against” North Korea, but China has not yet announced any new measures. Trump has repeatedly been very flattering and complimentary of Xi, The Communist Party and China.

The Chinese president has said he wants to resolve the nuclear crisis through diplomatic means over fears a regime collapse could trigger a rush of refugees across its border.

Any military intervention would almost certainly result in the catastrophic and indefensible nuclear attack of mainland USA resulting in millions of not tens of millions of deaths a nuclear watchdog NGO hasn’t warned.

What is “sentenced in absentia” and how likely is it Trump will ever be handed over?

Simply put it means sentences in a court of law with the defendant not present. A defense may or may not have been entered on behalf of the defendant.

Sentences in absentia are legally binding in all countries and under international laws.

However some countries refuse to recognise jurisdiction of a foreign sentence outside of that nation’s territory, whilst others have comprehensive treaties.

For example as we saw in the recent Catalan Crisis a Spanish court can order and execute an arrest in Belgium via a European Arreat warrant.

However it is is extremely unlikely anyone would enforce a warrant on behalf of North Korea.

Trump is not the first world world leader to be sentenced to death by a foreign nation in absentia, most notably post World War Two: