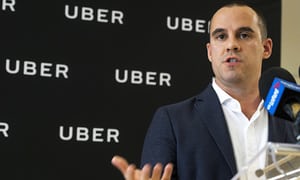 Uber customers have been hit with heavy charges for phantom trips they haven’t taken.

Uber users are complaining that they keep getting charged for rides they haven’t booked.

The phantom trips are taking place in completely different countries, and the fares are adding up to a significant amount of money.

One customer says she’s been incorrectly charged for over 30 rides, with the fees adding up to more than $1’300 USD.

The issues appear to be affecting Uber users in Singapore, who have been paying for trips made in countries including the UK and US.

Daphne Maia Loo posted a screenshot of her bank transactions to Facebook, showing an £154.74 GBP charge for an Uber trip she did not take. She says she’s spotted 15 unauthorised transactions like these
“All the bookings for Uber charged on my card were not made from my Uber app,” she told Channel NewsAsia. “My card was used on someone else’s Uber app, someone based in UK, as the charges were in GBP.”

Loo said Uber had blocked the account that used her bank details and agreed to refund her, but only after she’d submitted fraud claims for each payment with her bank.

Another customer in Singapore, Jenna Lim, said she was charged for 30 Uber journeys in five days, amounting to over $1’300 USD.

Customers have reported similar incidents in the past. Last year, Uber users in the UK said they were incorrectly charged for trips taken in Mexico and the US.

“We would like to assure the public that payment information is encrypted when you enter it into the Uber app.” a spokesperson from Uber Singapore told Channel NewsAsia.

“However, there are myriad reasons why such incidents occur, including whether the user is maintaining good habits in safeguarding personal information security, whether the device has been compromised, or even issues with the financial institution and its products.”

Uber has been hit with a series of issues over the past 24 months loosing high court battles to stop drivers claiming employment rights, multiple payment complaints, penalty charge complaints, the grey balling scandal and London refusing to renew the company’s licence for next year.

Deutsch Bank the bad news just gets worse with $35b fumble