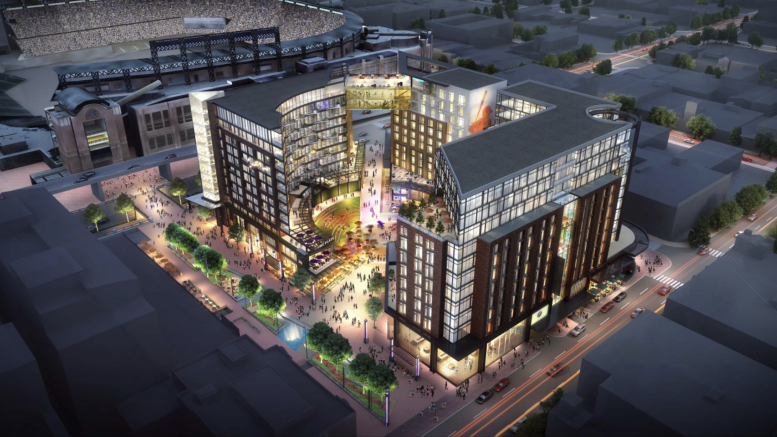 Colorado-based architectural design firm Stantec, in partnership with the Colorado Rockies, unveiled their plans to transform an entire city block into a new “stadium district.”

Renderings and preliminary plans were released to change the West Parking Lot at 19th and Wazee Street into a dynamic downtown space.

“The plaza is designed as a pre and post game gathering place for Rockies fans, complete with unique restaurants and state of the art audio and visual systems,” said Larry Weeks, principal at Stantec. “Beyond baseball, the plaza will serve as Denver’s ‘outdoor room,’ a year-round space that can accommodate neighborhood concerts, festivals and other activities,” said Daniel Aizenman, senior principal at Stantec.

Plans to develop this area came to the forefront as the Rockies lease at Coors Field was coming to an end this March. Earlier in 2017, this led to renegotiations which settled in a 99-year lease on the west parking lot. The lot is currently owned by Metropolitan Baseball Stadium District which represents taxpayers in seven metro area counties who helped fund the stadium when it was first built.

In the breakdown of the lease, a majority of the $200 million is to lease the land for the new development while only $75 million will go towards leasing Coors Field for the next 30 years. According to Metropolitan Baseball Stadium District, this is good news for the taxpayers.

The project is still in its early stages but according to Stanec it hopes to begin construction in the second half of 2018. This development joins a new trend in arena districts across North America. Stantec is currently providing design support for growing stadium districts in cities like Dallas, Tampa, Chicago, and Edmonton, Alberta, among others.

“We’re incredibly proud to help realize the vision long-held by the Rockies,” said John Yonushewski, Stantec buildings senior principal. “This development will be an urban jewel for downtown Denver and provide a much-needed public amenity for families and the neighborhood. Our team is inspired to design such an epicenter for excitement.”