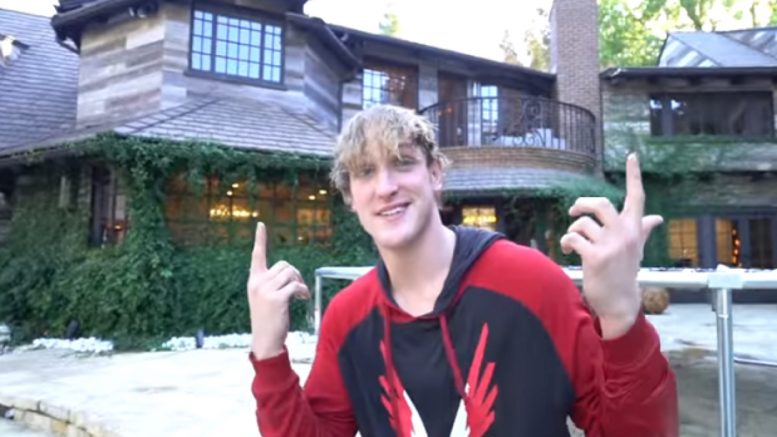 In late December YouTube millionaire Logan Paul celebrated his widely successful 2017 in trademark fashion, with a high-octane video boasting and bragging about all of his achievements and wealth.

Among his tasteless boasts were buying a $6.5 million USD mansion, complete with a home theatre system, launching his clothing range, Maverick Apparel; appearing on the Jimmy Kimmel show and starring in his first Hollywood movie.

In the boisterous 22-year-old’s own words 2017 had been his “rocket fuel” year, the heady and highly lucrative culmination of a story amature career that had started with him making six-second comedy sketches on the defunct video platform Vine.

“This was the year that two first names Logan and Paul became household names”, said LP as he beamed into the camera for the video entitled “Why 2017 was the best year of my life”.

However by the first week of 2018 the name Logan Paul had gone from household fame to global notoriety due to the first video he posted in the New Year, a video that has rocked his multi-million dollar empire to its foundations.

On Monday the 1st January 2018 LP uploaded a video, entitled “We found a dead body in the Japanese Suicide Forest…” that showed the corpse of an apparent suicide victim in Aokigahara forest, the site of frequent suicides.

LP had gone to the “haunted” forest at the base of Mount Fuji  intending to spend the night as a stunt for the video. However when he and his crew stumbled across the body of an apparent suicide victim he kept the cameras rolling, making jokes about the body and laughing throughout the clip.

The backlash to the video was swift and the video was deleted from YouTube, but not before it had been viewed more than six million times.

Over the last few days the fall-out has gathered pace as more than 120’000 people have signed a Change.org petition calling for his channel to be deleted from YouTube.

He has also been excoriated by celebrities such as Breaking Bad actor Aaron Paul and Game of Thrones actress Sophie Turner.

In a bid to save his career Paul issued a sullen video apology saying he was “ashamed” of himself and didn’t “expect to be forgiven”.

It is unlikely that any brands would risk their own corporate suiccide by sponsoring or advertising with LP’s videos now.

Born in Westlake, Ohio, in 1995, Logan Paul started vlogging on YouTube at the age of 10, below the legal age limit of 13.

His rise to social media fame started on the now-defunct short-form video platform Vine where he amassed over nine million followers and began making money through advertising.

His six-second comedy video routines and pranks, sometimes on unsuspecting members of the public (do not do this at home, in most countries this is not legal), racked up millions of hits and by the age of 19 he had moved to Los Angeles to live with some of the world’s biggest Vine stars.

He dropped out of education entirly in 2014 to pursue a full time career as a social media entertainer having never had a job.

Paul’s frenetic style was well-suited to the fast-paced nature of Vine, but it also translated successfully to a longer format on YouTube, where his daily mix of vlogs, pranks and comedy sketches has garnered over 15 million subscribers.

Today, he is one of the most recognised social media stars on the planet with a total reach on various social media platforms combined of 48.7 million.

LP is obsessed with becoming famous.
“I want to be the biggest entertainer in the world,” he told Business Insider in 2015. “That’s my deal. I’ll do whatever it takes to get that.”

Lp has managed to translate his huge global reach into a significant commercial operation that has earned him an estimated net worth of around $15 million USD.

As well as making thousands through ads on each video he posts he has also developed a lucrative merchandise line, which he plugs incessantly throughout his videos to his followers, who he self-labels as the Logang.

His exposure has also led to commercial partnerships with brands like Disney, Pepsi, HBO and helped him branch into film and TV.  In recent years he has landed roles in film such as YouTube Red’s amature film, The Thinning and the Hollywood movie Valley Girl.

The Aokigahara forest video is not the first time Paul, who says goal of his content is “always to entertain” and to “push the boundaries”, has courted controversy.

US gossip site Radar Online reports the prankster was arrested for entering a woman’s car in in 2014.

He forces entry into the victim’s car without permission, closed the door and began recording her, asking if ‘she was mad’, the report says.

“Paul did not immediately leave the vehicle when she told him to ‘get out.’ Paul caused her to believe by his actions of entering the vehicle that he would cause her physical harm,” the report said.  He was ordered to pay a fine of $150 and complete 75 hours of community service, he was also given a permanent criminal record.

Last year he was arrested by Italian police for flying a drone over the Colosseum in Rome, Italy, later posting the video on his channel. Earning him an international criminal record.

In recent days Paul has said he is taking some time away from vlogging to reflect following the fallout from the forest video.

In the meantime the fate of his highly lucrative career on YouTube remains unclear.

The platform that has helped catapult him to global fame and make him a multi-millionaire is now facing huge public pressure to remove his channel and permanently ban him from the site.

The company has taken measures against some of its most high-profile influencers who have attracted scandal in the past.

Last year YouTube cancelled the reality show of gaming vlogger PewDiePie and removed his channel from its premium advertising slot after he posted a video featuring allegedly anti-Semitic comments.

The company does have a range of sanctions it could employ against LP, who it found to be in breach of its policy on graphic content, such as demonetising his account.

Yet for the moment, the company is declining to say what punitive measures it will take against LP for the forest video.