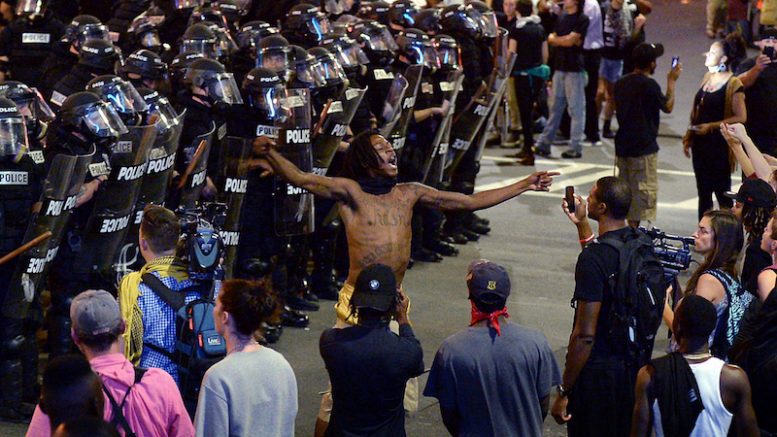 A protestor, center, yells to other protestors as CMPD officers, left, look on in Charlotte, NC on Wednesday, September 21, 2016. The yelling protestor was later taken into custody. Protestors were marching and rallying against CMPD officer Brentley Vinson's fatal shooting of Keith Lamont Scott on Tuesday evening at The Village at College Downs apartment complex in the University City area.

All hopes of rivalling China’s lucrative trade deals with African nations are done, gone, dead and buried for the US as Trump brands Africa “a shithole”

The US President asked why America should allow as visitors people from “shithole countries” during a meeting with legislators about a proposed bipartisan deal on immigration. His own legislators immediately reported the President to the United Nations for the violation of International Law.

Sources briefed on the conversation said Trump questioned why the US would want to admit more people from Haiti, Africa and a long list of Black and Muslim majority countries adding: “We should have more people from Norway”.

Asked about the President’s remarks, UN human rights spokesman Rupert Colville said: “These are shocking and shameful comments from the President of the United States. There is no other word one can use but racist. This contravenes UN protocols and International Human Rights Law standards.”

“You cannot dismiss entire countries and continents as ‘shitholes’, or entire populations, who are not white or Christian, are therefore not welcome.”

He added: “The future of the Dreamers should not be used as a bargaining chip to negotiate the most severe and restrictive immigration and security measures possible. These are human beings, not commodities.”

The Royal Family of Great Britain has blocked Trump from being invited to this year’s royal wedding and denied him a State Visit or audience with the Queen, in retaliation Trump has vowed to block US-UK trade deals post Brexit.

The Royal Family of Oman cancelled a joint interview with Trump at the White House.

Many Muslim and Black majority nations across Africa and the world have submitted official diplomatic complaints and summonsed US diplomats.

World wide protests have raged endlessly for the past 24hours.

“Trump has got the message, he is not welcome in London” Trump’ s trip to open the new US embassy in London has now been cancelled.

The only foreign diplomats to support Trump where both from the UK. Foreign secretary Boris Johnson who said “Britain can’t afford to loose the US as an allay and must support their partner.” And far right leader Nigel Farage.

Even Trump’s closest allay, Israel’s Netanyahu told Al-Sahawat Times “I can not say I stand by or support Trump’s comments.”

“Ours is not a shithole country, neither is Haiti or any other country in distress,” said Jessie Duarte, the deputy secretary general of South Africa’s ruling African National Congress party.

“We would not deign to make comments as derogatory as that about any country that has any kind of socioeconomic or other difficulties.”

He said: “America’s greatness is built on diversity, or have you forgotten your immigrant background, Donald?”

Trump himself is of Scottish origin whilst his wife Milena who changed her name legally from Meljanja is of Christian-Yugoslav origin, a region which is predominantly Muslim.

The White House confirmed reports of Trump’s remarks, but suggested the President was “fighting for permanent solutions” that strengthen the nation, and that included the use of a merit-based immigration system. Yet did not explain how the use of racist slurs assisted this.

Trump later tweeted that he would not accept the proposed bi-partisan deal as the US would be “forced to take large numbers of people from high crime countries which are doing badly.”

Overlooking the fact that the US has exponentially high levels of fatal crime.

He added: “I want a merit based system of immigration and people who will help take our country to the next level.”

In November, Donald Trump’s administration said it was ending Temporary Protected Status for people from Haiti.

It gave the approximately 59’000 Haitian immigrants who had been granted the status until July 2019 to return home.

Hundreds of thousands of US citizens currently work and live in Muslim countries such as UAE, which could enforce like for like messures if Trump persists his racist persecution of Muslim, Latino and Black ethnicities.