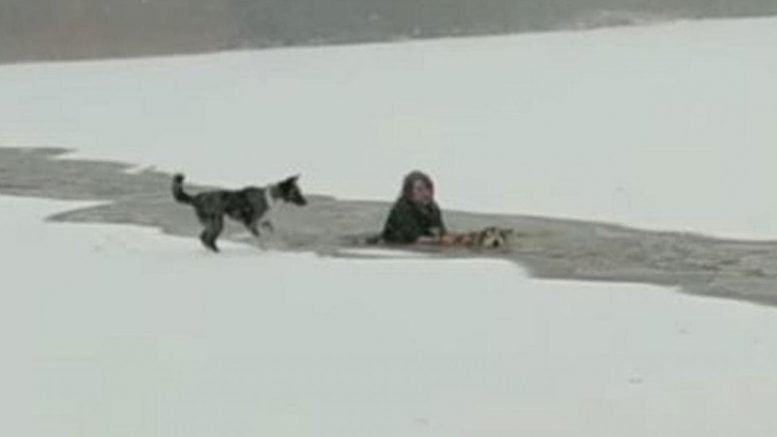 Incredibly a dog walker jumped into frozen lake and smashed through thick ice to rescue a stranger’s husky dog.

This is the incredible story of a dog walker who risked her own life by jumping into a frozen lake to rescue a stranger’s dog who had fallen through ice.

Security camera footage showed the moment the woman, who has not been identified and did not come forward for any form of recognition, jumped into the lake and began breaking ice with her bare hands to reach the animal in East Vancouver, Canada.

In the clip, the woman can be heard shouting “he can’t get out, so I’ll have to go in” after the husky wandered onto the frozen, snow covered lake and fell into the water on Friday.

The video footage appeared to come from a security camera and cell phone footage which was filmed by environmental activist Ben West who was out walking with his own dog near Trout Lake and enjoying the snow.

“This woman, it wasn’t even her own dog, she just started trotting out onto the ice and kind of falling through onto the water. People were kind of cautioning her ‘don’t do it’ but she said, ‘it’s a dog, I have to.'”

West said the freezing water was up to the woman’s waist by the time she reached the dog, named Tessa, which was struggling to swim.

Both the dog and rescuer survived unharmed, West said. The animal was quickly towelled off and began playing with the other dogs nearby, while the woman was taken to a neighbour’s house until paramedics arrived to check her over.

In a post on Instagram, West said: “This is the most amazing thing I have ever seen with my own eyes. A dog went out on the ice and fell through at Trout Lake and without hesitating this woman went out in the water breaking the ice with her hands and rescued the dog!?! It wasn’t even her dog. I’m so inspired and so happy it all worked out for the best. I saw the dog fall through the ice and screamed out. Community members all rushed to help and support her. We were all calling the dog’s name so it would keep swimming. She (the woman) was rushed to a house in the neighbourhood and put in a warm bath while the paramedics were en-route. A few of us then had to chase this woman’s dog around in circles in the park as she looked for her owner. We finally got her and brought back to her owner.”

“It’s great this ended with a happy best case outcome. We do not recommend anyone go out on ice without the proper safety equipment & training, ice can be very unpredictable & cold water – deadly. Rescuer safety is first priority. Be safe folks.”
Follow Evening Standard Online:

The story rapidly spread across the globe and by the next day (Saturday) the story was trending from Italy to UAE to Hong Kong.