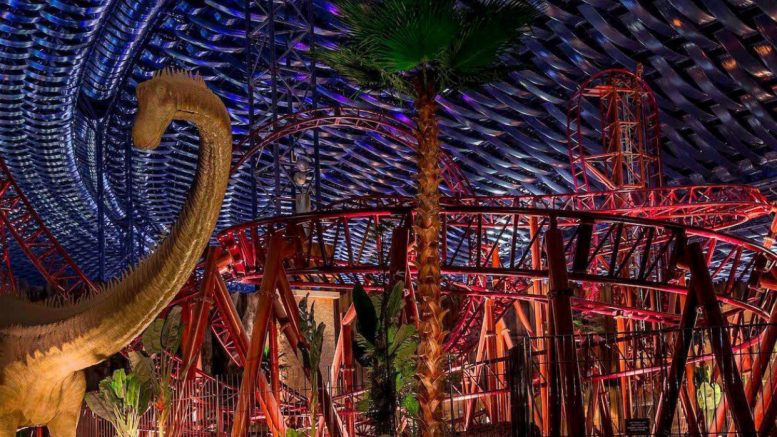 And now it’s also home to the largest indoor theme park on Earth.

Measuring 1.5 million square feet, IMG Worlds of Adventure – which opened on August 31, 2016 – is a nod to characters from Cartoon Network and Disney’s Marvel universe.

IMG Worlds of Adventure cost more than $1 bn USD to build and is one of the most recent additions to the city’s bid to become the world’s entertainment capital, as high-end hotels and luxury shopping malls increasingly dominate the skyline.

​The huge space can host 30’000 visitors a day and even includes a 12-screen cinema complex with an IMAX screen.

With theme park revenues in the United Arab Emirates expected to increase by 78% to $837 million USD in 2019, the park has a head start in positioning itself as one of the GCC’s leading entertainment centres.

There are 22 rides and attractions in IMG Worlds of Adventure, including the velociraptor rollercoaster which takes riders around the indoor park before speeding through the surrounding desert. The ride is in The Lost Valley zone.

It propels riders to speeds of up to 100 km in 2.5 seconds, launching them from the deep dark prehistoric jungles of the Lost Valley out into the Dubai desert and back.

The Haunted Hotel is also a particularly popular attraction. The immersive experience is filled with mazes and sits on IMG Boulevard, which covers 200’000 square feet of space.

Elsewhere in the park, Cartoon Network classics like the Powerpuff Girls sit alongside Marvel heroes including the Hulk and Spiderman.

The idea of a temperature-controlled indoor theme park is appealing to locals in a place where summer temperatures average 41°C (106°F).

IMG Worlds of Adventure is one of several theme parks attracting tourists to the region.

​Dubai hopes to attract 20 million tourists annually by 2020, when the World Expo will visit the city. In 2015, 14 million people visited the city.