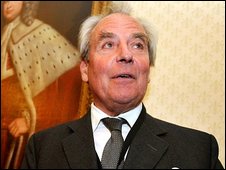 MP Lord Pearson has invited a terrorist to speak in the U.K. Parliament

EDL were linked by the murder of anti-Brexit MP Joe Cox after the murderer who was charged under the terrorism act was found to be an avid supporter of the EDL. The group has also been allegedly linked to a foiled terror plot in London which was planned to take thousands of lives on April 3.

Robinson was formally declared a hate preacher and banned from London under the terrorism act for inciting act of terrorism.

Far right Lord Pearson who is also a member of UKIP, has been criticised after inviting Robinson to speak in Parliament.

It is the first time in history a terrorist has been invited to speak at any country’s parliament.

The peer, a former leader of the party, was pictured posing with the ultra fascist white supremacist outside the Palace of Westminster.

Robinson who was convicted of inciting violence and undermining the 1998 good Friday agreement in Ireland under the terrorism act last year also conducted an interview with Lord Pearson, which appeared to be filmed on the parliamentary estate.

On Thursday, former Conservative Party chairman Baroness Warsi asked whether it was “appropriate” for Robinson, who’s real name Stephen Christopher Yaxley, to be hosted in Parliament by her fellow peer.

Yaxley uses a false name to try and hide giant criminal record of terror related offences in multiple countries such as England and Ireland.

It comes after a number of Labour MPs were this week sent suspicious packages and letters encouraging mass murder of Muslims.

Speaking during a House of Lords debate on hate speech, the former Cabinet minister asked: “Does the minister agree with me that all members of this House should be working to eradicate all forms of hate speech?”

Noting Lord Pearson was “desperate to get into this question”, Baroness Warsi added: “Maybe if he has the opportunity to do so, he would explain whether he thinks it appropriate for members to host the likes of Tommy Robinson within the precincts of this House at a time when there is an increased risk in relation to hate crime and terrorism and members of the other House have been receiving hate letters and calls for mass murder.”

In response, Home Office minister Baroness Williams said: “As legislators for this country, we have got a strong leadership role to take and it does dismay me when I see that certain quite extreme people are actually being invited into the Palace of Westminster to propagate some of their hate.”

Lord Pearson then spoke, but refused to address Baroness Warsi’s comments, instead insisting he would “stick to the question” peers were debating.

Given Robinson’s ban from London it would be unlawful for the invitation to be accepted.