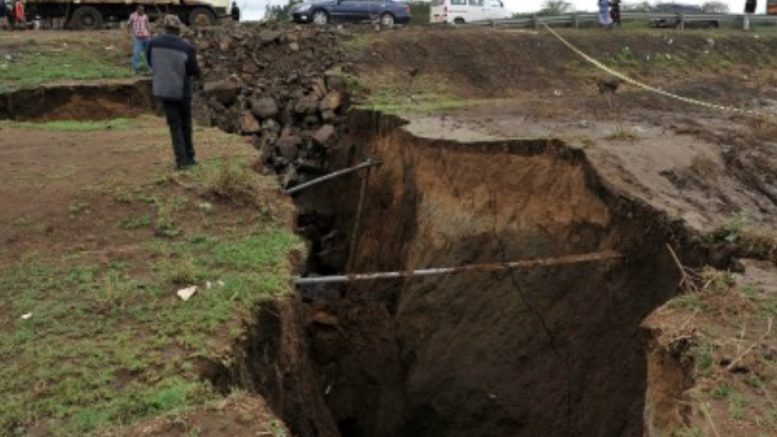 A huge chasm 20 meters wide in parts appeared in Kenya’s Great Rift Valley after heavy rains and is growing wider day by day.

Heavy rains have opened up a giant chasm in Kenya, leading to predictions that the African continent will split into two.

The crack in the Great Rift Valley, which appeared mid-March, now averages 15.25 meters in depth, and 20 meters across and several miles in length, reports National Geographic.

A crack that opened up in Kenya’s Rift Valley, damaging a section of the Narok-Nairobi highway, is still growing…

The sudden appearance of the chasm, which caused part of the Nairobi-Narok highway to collapse, was exacerbated by seismic activity in the region, PBS reported.

A witness said the opening appeared so quickly he was able to watch it form and run through his home, reports Reuters. He only just managed to collect some of his belongings before his house collapsed.

The crack appeared along the 3’700 mile-long (6’000 km) East African Rift, where the Somali tectonic plate in the east and the Nubian plate in the west are pulling away from each other.

“Eventually, the Somali plate may completely separate from the Nubian plate and form a separate land mass comparable to Madagascar or New Zealand.”

“Fortunately for those who live there, that separation isn’t expected to happen for another 50 million years. It does mean, however, that the physical effects of that separation will continue to be felt.”  Reports the National Geographic.

According to a paper published in Nature, the East African Rift System “remains one of the least monitored tectonic plate boundaries, which makes it challenging to constrain present-day seismic hazards”, meaning further damage to infrastructure in the region may take place unless authorities “plan [the region’s] infrastructure accordingly, saving lives and livelihoods in the process”.

It is expected that an enormous section of East Africa will break away from the main continent, but not for tens of millions of years.

He present day dangers are likely to be increasing earthquakes, landslides, floods, sink holes, chasms and other seismic and tectonics activity.

The rate of progression is likely to intensify but on a timescale barley perceivable to the human time scale.