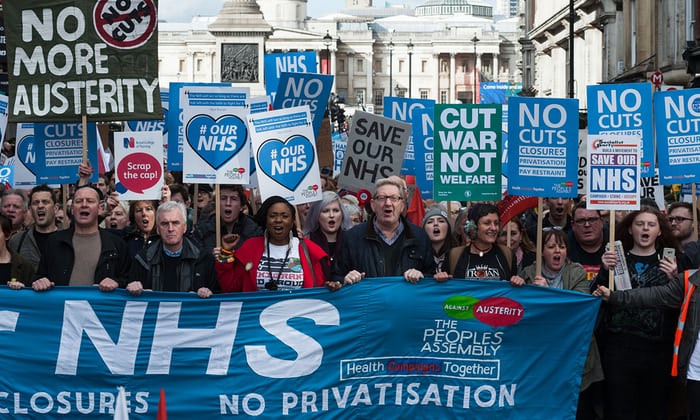 In a dramatic public announcement the NHS (the UK’s nationals health service) has admitted it needs £2’000 in tax from everybody working in the UK to stay afloat as rescue plan report concludes.

The Institute for Fiscal Studies and the Health Foundation both say that the health service requires urgent increase in government spending or face total collapse.

Taxes will “almost certainly” have to rise considerably over the coming years simply to prevent the National Health Service and social care system from slipping further into crisis, a major new report concludes.

The UK already has the worst mental health record in Europe and some of the worst dentistry services in the western world with many Brits travelling to Turkey, Germany and Poland for dental work.

In the UK people pay 12.6% of their income as mandatory health insurance with their employers paying an additional 13.6%. In addition to this they pay for their medications and dental work and dental appointments. With the longest waiting lists in Europe and some of the worst success rates in the western world many have questioned whether or not the NHS even exists anymore and question justification for the combined 26.2% tax (soon to rise to 34.2%) for health insurance making it the most expensive health insurance in the world, and one you can’t legally option out of even if you pay for private health care.

The Institute for Fiscal Studies and the Health Foundation state that the NHS, which has been suffering the most severe fiscal squeeze since its foundation over the past eight years, now requires an urgent increase in government spending in order to cope with an aging system and rapidly declining standard of public health as a direct consequence of nation wide poverty.

Funding the projected increases in health spending through the tax system would need taxes to rise by 4% of GDP – the equivalent of £2’000 per person the experts said. This would also hit companies and small businesses who would have to match the tax rises for each of their employees.

The two organisations say that state funding growth rate, which has been just 1.4 per cent a year since 2010, will have to increase by as much as 400 per cent to 5.6% (37.4% combined total) over the next 15 years if government pledges, such as bringing down waiting times and increasing the provision of mental health services, are to stand any chance of being delivered.

The UK has the world’s highest rate of mental illness yet has the lowest spending on mental health services in Europe. Simply criminalising mental illness under the Mental Health Act 1983 (a.2007 a.2017) instead, meaning many sick patients are confined in police cells or jail cells instead of receiving hospital treatments. A practice outlawed by the majority of developing and non-developed nations almost 20 years ago.

The report adds that it is hard to see how this permanent rise in health spending – which would represent 4 per cent of GDP would be possible without increasing one of the government’s major sources of revenue such as income tax, national insurance or VAT.

The finding comes amid evidence of huge strain on the service and a recent promise by Theresa May to bring forward a longer-term funding regime for the NHS.

The UK inflation has been significantly higher than wage rises ever since the 2008 global economic crash which had its ground zero in London’s finance district. For ten consecutive years prices, crime and taxes have risen and wages, employment and education have fallen.

There has also been growing speculation that Chancellor Philip Hammond is planning to announce a hike in taxes specifically to increase resources for the health service, perhaps along the lines of Gordon Brown’s National Insurance hike in 2002.

The Conservatives dropped their pledge not to raise income tax, national insurance or VAT at last year’s general election.

The government imposed severe cuts on almost every area of government spending in 2010, the coalition government ensured that the NHS budget was broadly flat in real terms. That policy has been followed by the Conservatives since 2015.

Since the 2008 economic crash the UK life expectancy has dropped by 10 years in all but the most affluent of regions, making the life expectancy lower than the age of retirement for the first time ever.