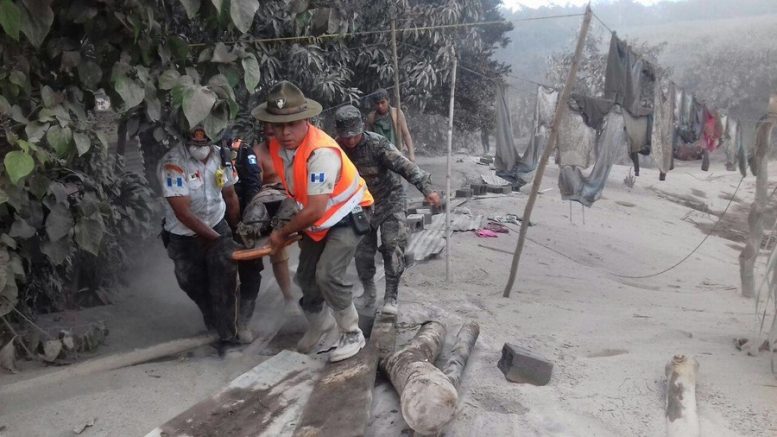 One survivor describes fleeing to hillside from rivers of lava. “Not everyone escaped, I think they were buried”

A huge volcanic eruption has engulfed homes and farms across three towns in Guatemala, killing at least 25 people with local officials warning the death toll is expected to rise as the number of missing continues to rise.

Volcan de Fuego, whose name means “Volcano of Fire”, spewed an 8km (5-mile) stream of red molten lava and belched a thick plume of black smoke and ash that rained down across the capital and other major cities across the country.

One video purportedly from the worst-affected town of El Rodeo showed the charred remains of three victims strewn atop the steaming, ashen remnants of a deadly pyroclastic flow.

[Video not shown out of respect for the deceased]

Rescue agencies estimate around 300 people have been seriously injured, but they have struggled to reach rural areas cut off by the eruption. Authorities have been unable to account for an undetermined number of people and say whole villages remain unaccounted for.

Homes, farms, roads and entire rural villages were flattened by pyroclastis clouds before being burried under lava and ash.

“Unfortunately El Rodeo was buried and we haven’t been able to reach the La Libertad village because of the lava and maybe there are people that died there too,” said Sergio Cabanas, the general secretary of Guatemala’s CONRED national disaster management agency.

A visibly exhausted woman, her face blackened from ash, said she had narrowly escaped as lava poured through corn fields.

She said “plenty” of members of her family had been left behind. “Not everyone escaped, I think they were buried,” Consuelo Hernandez told news outlet Diario de Centroamerica.

Eddy Sanchez, director of the country’s seismology and volcanology institute, said the flows reached temperatures of about 700C (1’300F).

Dramatic video showed a fast-moving flow of pyroclastic material, lava and slurry, slamming into and partly destroying a bridge on a road between Sacatepequez and Escuintla.

Homes were still burning in El Rodeo late on Sunday, and a charred stench hung over the town.

Amid darkness and rain, the rescue effort was suspended until early the next morning, municipal firefighters’ spokesman Cecilio Chacaj said.

Among the fatalities were four people, including a disaster agency official, killed when lava and fire engulfed a home in El Rodeo village, national disaster coordinator Sergio Cabanas said.

Two children were burned to death as they watched the volcano’s second eruption this year from a bridge, he added.

Another victim was found in the streets of El Rodeo by volunteer firefighters, but the person died in an ambulance.

At an ad-hoc morgue in the town of Alotenango, at least three bodies lay covered with blue sheets.

Guatemala’s disaster agency said an additional 3’100 people had evacuated nearby communities, and ash fall from the eruption was affecting an area with about 1.7 million of country’s 15 million people. Shelters were opened for those forced to flee.

“Currently the volcano continues to erupt and there exists a high potential for (pyroclastic) avalanches of debris,” the disaster agency said late on Sunday via Twitter, quoting Sanchez, the director of the seismology and volcanology institute.

Guatemalan president Jimmy Morales said he would issue a declaration of a state of emergency to be approved by Congress and urged people to heed warnings from emergency officials.

Ash fell on the Guatemala City area as well as the departments of Sacatepequez, Chimaltenango and Escuintla, which are in south-central Guatemala around the volcano.

Streets and houses were covered in the colonial town of Antigua, a popular tourist destination.

Aviation authorities closed the capital’s international airport because of the danger posed to planes by the ash.
One of Central America’s most active volcanoes, the conical Volcan de Fuego reaches an altitude of 3’763 meters above sea level at its peak.

Venezuela army awaiting US ‘with weapons in hands’