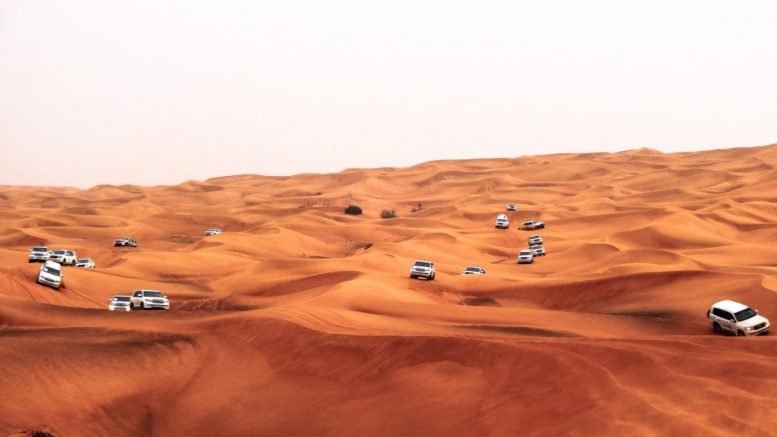 Rice in the desert | China grows rice in the Dubai desert

Renowned Chinese agricultural scientist Yuan Longping and his research team’s experiment of planting saltwater-tolerant rice in desert areas of Dubai in the United Arab Emirates supplied with nothing more than seawater proved to be a tremendous success, with one type of rice yielding more than 7.5 tons per hectare.

Saltwater-tolerant rice is designed to grow in tidal flats or other areas with heavy salt content.

It was the world’s first successful case of planting rice in a tropical desert area, standing as China’s contribution to improve the capability of people in desert areas to be self-sufficient in staple foods, a move that can safeguard global food security and improve the desert ecological environment.

Poverty, energy and food shortages are three of the top risks to geopolitical stability.

The rice experiment was prompted by an invitation from the private investment office of the ruler of the Emirate of Dubai, HH Emir Sheikh Mohammed bin Rashid Al-Maktoum according to Zhang Guodong, deputy director at the Qingdao Saline-Alkali Tolerant Rice Research and Development Center in Shandong province, China.

The center, led by Yuan, China’s “father of hybrid rice”, was founded in 2016 to help expand the farming of salt-tolerant varieties of rice to help aliviate shortages in China’s interior.

In January, the center chose dozens of types of hybrid rice and planted them on small plots of suburban desert areas neighboring the city of Dubai.

After five months of growth, the center invited experts from India, Egypt, the United Arab Emirates and other countries for evaluation, and found three types of rice yielding more than 6 tons per hectare, and one variety breaking the impressive 7.5t/h mark. Later in June, a second evaluation will be carried out for middle-season rice.

The Dubai daytime temperatures often rise over 50 C, and nighttime temperatures can drop by more than 30 degrees. Humidity stays very low, almost always below 20 percent and there are frequent sandstorms and high winds.

The biggest challenge is the sandy desert ‘soil’, which is low in organic matter and unable to preserve soil moisture and not granular in structure.

To make it worse, sea water remains just 7.5 meters below the soil, which makes it easy to become saline.

With this success, the center and the private investment office of the ruler of the Emirate of Dubai plans to set up a 100-hectare experimental farmland in Dubai, to test the production costs and cultivation techniques of the saltwater-tolerant rice and prepare for further promotion.

The two parties will construct a 100-hectare standard farmland in 2019 with an aim at planting full scale production by 2020 should the final experiments prove fruitful.