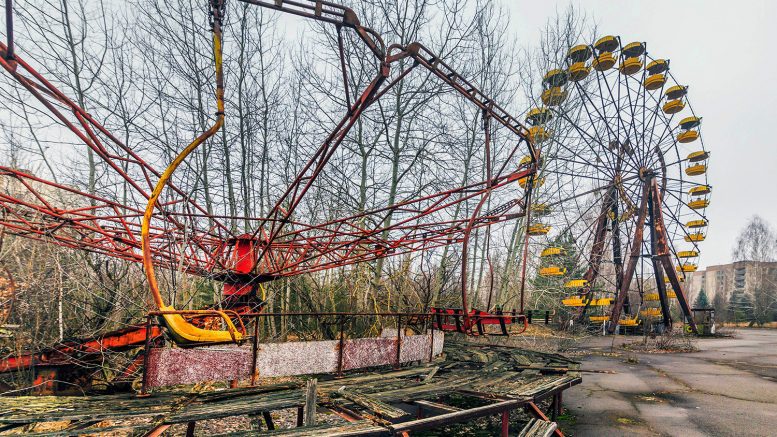 Long before the advent of genetic engineering, in the aftermath of World War II the only way of creating radically new species without waiting generations and generations for selective breeding to take place was via a process called atomic gardening.

Beginning in the 1950s, atomic gardens were a part of Atoms for Peace, a program to develop peaceful uses of fission energy after World War II. Gamma gardens were established in the United States, Europe, parts of the former USSR, India and Japan. Though these gardens were initially designed with the aim of testing the effects of radiation on plant life, research gradually turned towards using radiation to introduce beneficial mutations that could give plants useful characteristics. Such characteristics include increased resilience to adverse weather, a higher sugar content or a faster growth rate. In addition, the Atomic Gardening Society was established in 1959 by Muriel Howorth, an atomic activist from the United Kingdom, in conjunction with a growing movement to bring atomic energy and experimentation into the lives of ordinary citizens.

In 1960, Howorth published a book entitled “Atomic Gardening for the Layman” along a similar theme. Notably, the Atomic Gardening Society utilized an early form of crowd-sourcing, in which members received irradiated seeds, planted them in their gardens, and sent reports back to Howorth detailing the results. Howorth herself made national news upon growing a two-foot-tall peanut plant after planting an irradiated nut that germinated after just four day.

The youngest member of the society was Christopher Abbey (15), a student at Eastbourne College (UK) and the son of a dentist, who received a certificate of merit for propagating several species of irradiated seeds to maturity.

Yet as much as atomic gardening was down to sheer chance there was always some sort of human element of control.

However in the wake of the infamous Chernobyl disaster, humans left leaving nature and radiation to take its course.

Wolves from the Chernobyl site have been roaming freely beyond the nuclear disaster zone’s border, increasing fears that they will spread mutant genes.
The site became off limits to humans after the nuclear power plant disaster on 26 April 1986, due to concerns about the record level of radiation, although it has opened to tourism in recent years.

It is thought that the lack of human interference has allowed animals to thrive in the 18.6-mile-wide exclusion zone.

Wolves began to take over the site in 2016, when their population was thought to be around 300.

Scientists have followed the wolves as the population has grown to a number now estimated to be up to seven times greater than that of any surrounding nature reseeves.

Fourteen grey wolves (13 adults and one male juvenile) were tracked using GPS collars to see how far they strayed from the exclusion zone.

Study lead author and wildlife ecologist Michael Byrne told Live Science: “No wolves there were glowing – they all have four legs, two eyes and one tail.”

In their article for the European Journal of Wildlife Research, the researchers said that the adult wolves had stayed in the zone but within three weeks, the young wolf had been tracked roaming up to a very significant, 186 miles away.

This raised questions as to the effect of wolves potentially affected by damaging radiation carrying mutant genes to pass onto other wolf communities.

Byrne said: “We have no evidence to support that this is happening.

“It is an interesting area of future research, but it is not something I would worry about.”

The Chernobyl nuclear disaster saw the power plant release about 400 times more radioactive fallout than the bomb dropped on Hiroshima near the end of World War II.

Particles were spread thousands of miles across Europe, dozens of residents were immediately killed and many thousands others exposed to the radiation causing life shortening cancers.

Byrne added “Instead of being an ecological black hole, the Chernobyl exclusion zone might actually act as a source of wildlife to help other populations in the region.

“And these findings might not just apply to wolves – it’s reasonable to assume similar things are happening with other animals as well.”

The former USSR city of Chernobyl lies in what is now Ukraine just east of Europe.