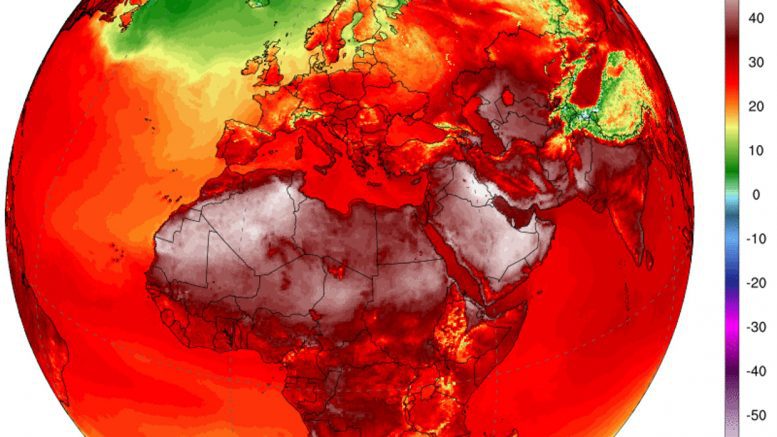 Besides the long-term effects such temperatures may have on climate change, many of these weather milestones caused immediate hazards. And according to the most recent weather data from the University of Maine’s Climate Reanalyzer, the high temperatures show no sign of subsiding any time soon.

On Thursday, the temperature in parts of Russia’s icy Northern Siberia reached 33 C, according to the Washington Post. Northern Siberia sits along the coast of the Arctic Ocean, so it’s highly unusual for temperatures to spike above the minus 10 C average for the season.

Other typically cooler locations also suffered during the global heatwave, resulting in damaged buildings and infrastructure, and a spike in heat-related deaths.

The Climate Reanalyzer is a platform developed by the University of Maine and the National Science Foundation USA, to visualise climate and weather data sets. The brain child of Dr. Sean Birkel of the university’s School of Earth and Climate Sciences, the platform provides access to 10-day forecasts across the globe as well as maps that correlate to historical station data and deeper analysis.

The platform measured the air temperature at 2 meters above the ground level over the month of June 2018 across the entire globe and revealed some startling findings. 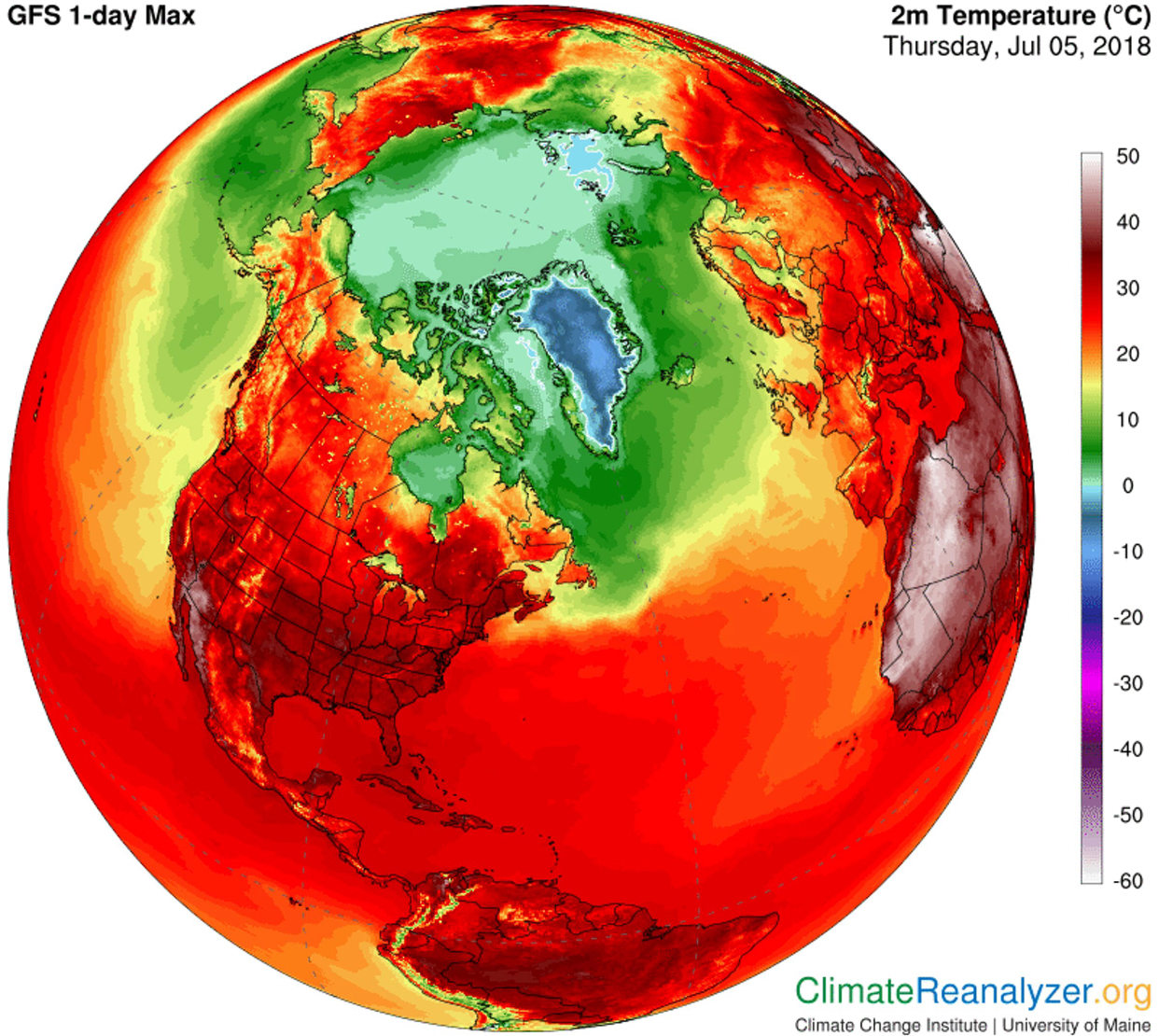 Both the US and Canada reached milestones in record high temperatures in the first week of July. Denver tied its all-time record of 41 C while Burlington, Vermont, set its all-time warmest low-temperature of 27 C over a one week period (meaning the temperature, day or night, never dropped below 27 C for the entire week).

Meanwhile, Canada’s heatwave reached a dangerous new level in Quebec. On Monday 2 July 2018, Montreal saw its highest temperature in record history, reaching 38 C for the first time since records began in Canada, some 147 years ago.

On Thursday, CBC reported that the heat-related death toll jumped to 18 people in Montreal and at least 33 people across the province.

“Today is the highest-risk day for people who have not had access to cold places,” Dr. David Kaiser from Montreal’s public health department announced. “It’s not over yet.” 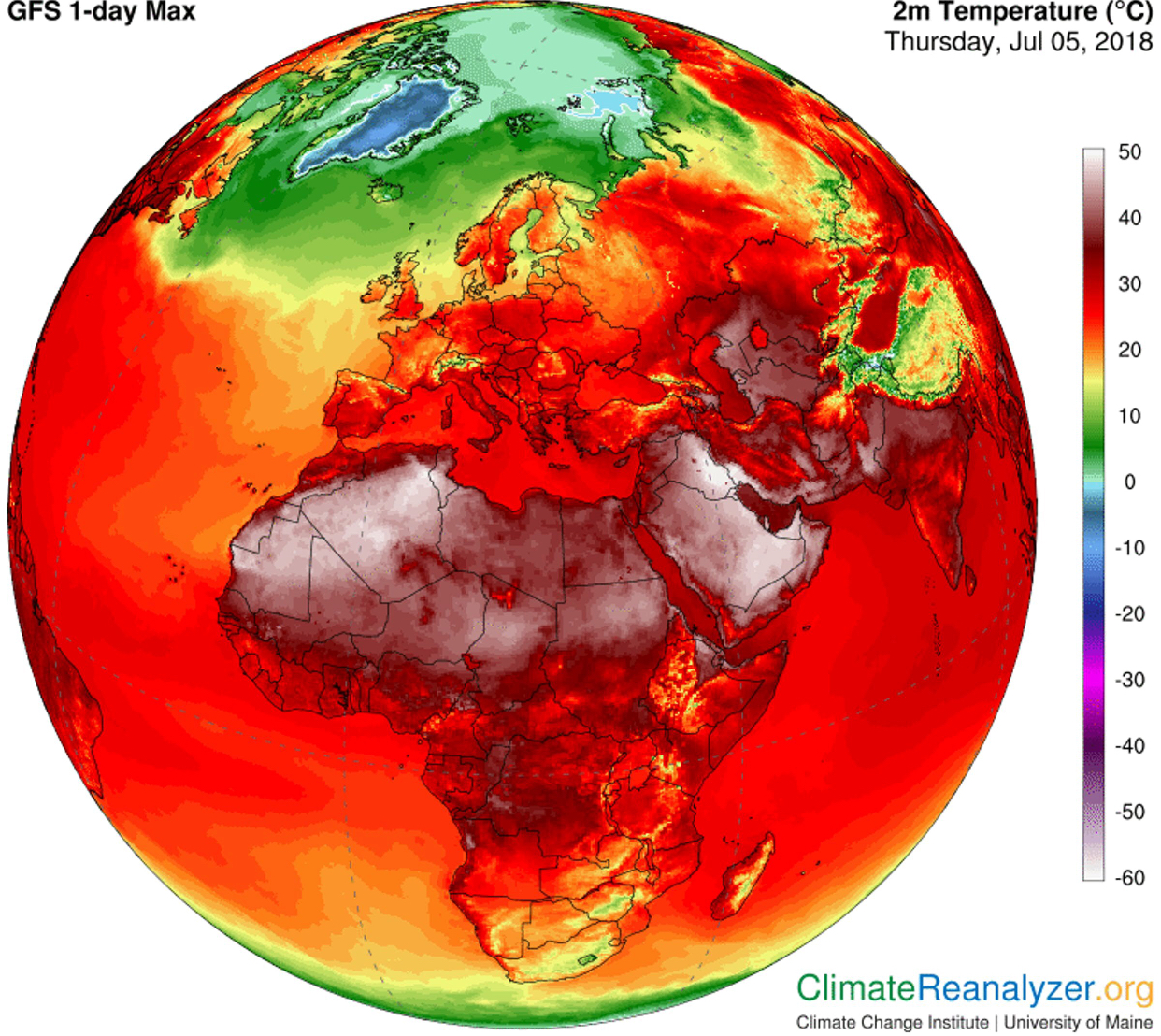 Europe’s Heat Wave has been extreme so far, to the point that the heat melted buildings.

Heat waves stretched across the continent but created the most problems in the usually chilly British Isles and Ireland.

Scotland set its hottest temperature on record, reaching 33 C. This caused problems in Glasgow, which had been suffering its hottest day on record, clocking in at 32 C.

Glasgow wasn’t built to withstand such heat, and the record-breaking day caused the roof of the city’s science centre to melt, rubbery goo ran down the sides of the building as the roof softened and dripped.

London saw temperatures over 30 C for most of the month of June and the start of July with temperatures on the ‘Tube’ (the under ground rail network) reaching a dangerous joint record of 49 C matched only in 2017.

Asia, North-Africa and the Middle-East.

Many regions within the Middle East are accustomed to high temperatures, but the 28 June 2018 created a new standard for what the Arab-Persian Gulf region could withstand.

The coastal city of Quriyat, Oman, never dropped below 43 C at night for the entire week, setting the highest minimum temperature ever recorded on Earth over a 24 hour period, and it broke this record every single day for a week. Day time temperatures broke thermometers which were incapable of recording over 60 C.

Later in the week, Russia and the Caucuses continued the trend of smashing temperature records. On the 2 July 2018, Yerevan, Armenia reached 43 C , a record high for the month of July. Two days later, Tbilisi, Georgia reached its all-time record of 41 C.

While scientists are still only scratching the surface of how this heatwave will affect certain cities in the long term, the immediate effects from the current heatwave were often just as precarious. Considering the Northern Hemisphere’s summer season only just kicked off in June, local governments will have to work with scientists to prepare for the extreme weather ahead as predictions are that the heatwave will last well into September in parts of the Midle-East and Mediterranean.

The really troubling data came from the Ocean temperatures, especially around the poles. The Antarctic, which is currently in the middle of its winter, saw temperatures high, even for its summer.

The Sultanate of Oman on the Gulf Cost not only overtook Iran and Libya to become the world’s hottest country officially with night time temperatures not dropping below 43 C and day time temperatures breaking 60 C. The GCC nation also saw the hottest sea temperature exasperating the ever growing dead zone in the Gulf of Oman where no fish or plant life can survive. (Read more…) 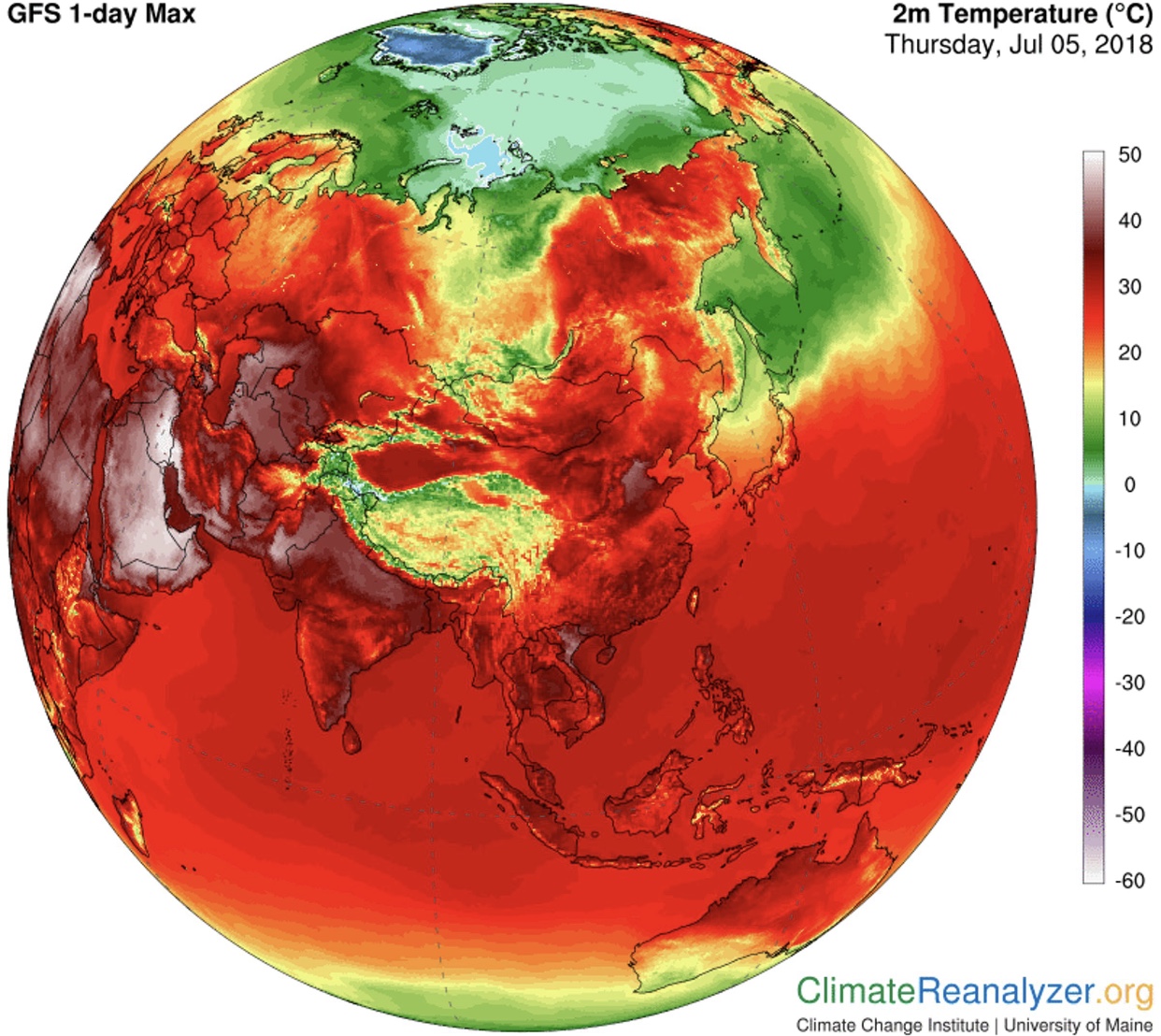