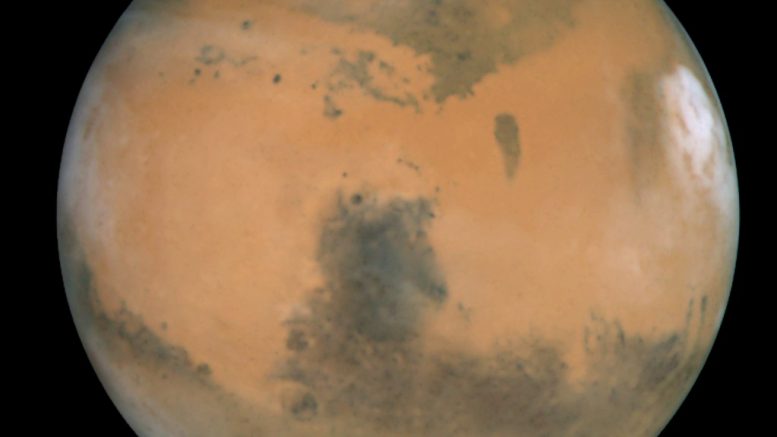 Liquid water (H2O) is refreshingly abundant on the moons of our outer solar system, but it has proven surprisingly tough to find in reliable quantities on Mars, until now.

What’s more, the underground lake is not likely to be alone.

“There are other areas that seem to be similar. There’s no reason to say this is the only one,” says Elena Pettinelli of Italy’s Roma Tre University, a coauthor of the paper reporting the discovery in the journal Science.

If confirmed, the buried pocket of water could answer a few questions about where Mars’s ancient oceans went, as well as provide a resource for future human settlements.

Even more thrilling for astrobiologists, such a feature may be an ideal habitat for extraterrestrial life-forms.

“In this kind of environment that we know of on Earth, in the Antarctic, we have bacteria.” Pettinelli says. “They can be deep in the ice.”

Billions of years ago, Mars was likely warm and covered in seas like its larger, bluer neighbour (Earth). Yet the Mars of today is a parched, toxic desert, and for decades, scientists have been trying to decipher what happened to the water that once soaked, sloshed, and tumbled over its sands.

To date, scientists have found water on Mars multiple times, but it’s usually quite transient or inaccessible, either hovering in the atmosphere, locked into permafrost or polar caps, or perhaps seasonally seeping down crater slopes. The amounts found doesn’t quite fill those ancient Martian seas or make crop-growing particularly easy.

“We know there was a lot of water on Mars’s surface, and we can’t quite account for all of it today,” says Bobby Braun of the University of Colorado, Boulder. So, scientists hypothesized that some of the missing water could be trapped in subsurface aquifers containing vast stores of liquid.
“I’m going to have to science the s**t out of this.”

However, humans didn’t launch spacecraft capable of sniffing out buried water until earlier this millennium.

One of them, the European Space Agency’s Mars Express spacecraft, has been orbiting the fourth rock from the sun since 2003; riding on board is an instrument called MARSIS, which uses radar pulses to see into the Martian subsurface. It works by sending low-frequency radio waves into the planet, which burrow beneath the ground until they bounce off geologic structures and boundaries. By studying how those waves are reflected back to the spacecraft, scientists can infer what might lie beneath.

In 2008, the MARSIS team saw glimmers of what could be some very bright reflections near the planet’s south pole, in an area where frozen ice sheets are stacked atop one another. On Earth, the brightest radar reflectors are pools of briny water, so the team decided to take a closer look at the region.

After a few years of gathering data that weren’t exactly useful, the team finally began collecting enough observations in 2012 to assemble a bigger picture. Fom there, it took another three years and 29 spacecraft passes before scientists had enough information to work with.

“We knew that there was something there, and we were curious to know what was under that area,” Pettinelli recalls. “And we were stubborn enough to do the data analysis.”

Sorting through the MARSIS data wasn’t easy. Over the next two years, the team compiled and processed the observations and worked very hard to rule out alternate possibilities, such as deeper layers of carbon dioxide ice.

Eventually, by comparing the reflectance patterns on Mars with those seen on Earth, scientists were convinced that they’d found a subglacial lake.

“This is space. It does not cooperate.”
The Mars Express team compares the discovery to lakes tucked beneath the ice sheets of Greenland and Antarctica, which are huge and certainly more than capable of hosting life as we know it.

But not everyone is convinced that the “lake” is actually a lake. Even according to the team, it could instead be a deposit of water saturated salt sludge, more like muddy sediments than a pocket filled with liquid.

Determining the exact nature of the structure will require a different instrument, Pettinelli says.
“We can’t choose between one or the other. We don’t have enough information to say this is a lake or saturated sediment like an aquifer,” Pettinelli says. “The lake will be more interesting.”
That is, assuming it’s even there.

“We do not see this reflector,” says Bruce Campbell of Smithsonian’s National Air and Space Museum, who is a member of the team operating a similar instrument called SHARAD on NASA’s Mars Reconnaissance Orbiter.

MRO has orbited Mars since 2006, sweeping its radar over vast swaths of alien landscape, including many passes over the south pole’s layered deposits, and it hasn’t turned up anything resembling a reservoir.

This is likely because MRO’s radar uses different wavelengths that are scattered by the polar ice before they reach the potential reservoir’s depth, says Jack Holt of the University of Arizona. But anything as reflective as a liquid lake should be identifiable by SHARAD, he notes.

“A brine is probably the strongest radar reflector you can come up with, aside from metal,” he says. “A lake would mean a smooth, mirror-like reflection that is more likely to show up in SHARAD [but] if it’s saturated sediments, it could be a rougher surface and therefore easier to miss with SHARAD.”

In all, scientists are eager to confirm the finding, including those on the MARSIS team.

“I think, we’ve done a good job in trying to kill this idea, in the sense that we have been trying to destroy the possibility that it was water many times.” Pettinelli says. “So we are quite convinced now, and we hope to be more convinced in the future with other data.”

“The good thing is, I know the recipe: You take hydrogen, you add oxygen, and you burn.”

Assuming it’s there, this little pocket of saltwater may help solve the mystery of Mars’s missing oceans. It’s also a clue about the planet’s hydrological cycle, which is theorized to involve buried aquifers charged by melting polar ice caps, with the bulk of the water running north from the southern highlands, says Nathalie Cabrol of the SETI Institute.

“You can intuit that there would be either very damp sediments at the poles of Mars, or a lens of liquid water,” she says. “This is where you expect this reservoir to be.”

No stranger to water in weird places, Cabrol’s work on Earth includes investigating Mars analog environments, which sometimes requires diving into lakes tucked among the peaks of the high Andes. Whether the MARSIS find is soggy sediments or an actual lake, she says it’s thrilling.

“What you see here is potentially the presence of water, of shelter … and you’re going to produce nutrients out of the minerals,” she says. “What you need is a source of energy … and if there were recent volcanoes in the polar regions, then this is definitely a place that would become a high habitability and life target.”

On the other hand, she notes, “it would be a very problematic place to go, because it would be under the special regions for planetary protection,” she says, referring to the UN regulations aimed at preventing interplanetary contamination of habitable environments.

The new lake is also the kind of resource that humans interested in settling on Mars might want to take advantage of, though perhaps not right away.

“I think it’s very unlikely the first humans on Mars are going to drill down to several kilometers,” says Braun, an advisor for National Geographic’s MARS series and NASA’s former chief technologist.

“But I think it’s probably true that if this is a lake, there are other bodies of water like it that are perhaps closer to the surface,” he says, “and if we knew that there was a big body of water at tens of meters down, that would be something you’d certainly want to know about when you’re planning a base camp.”