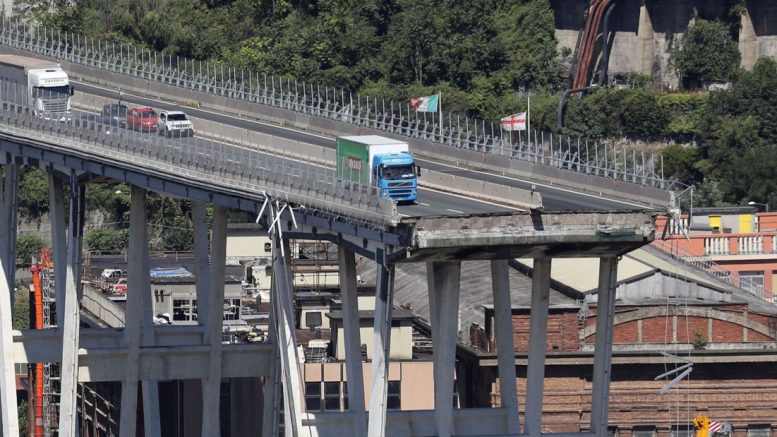 Italy has declared a state of emergency after at least 39 people died, 15 critically injured, 12 moderately injured and douzens still missing, following the collapse of a major bridge in the Italian city of Genoa. 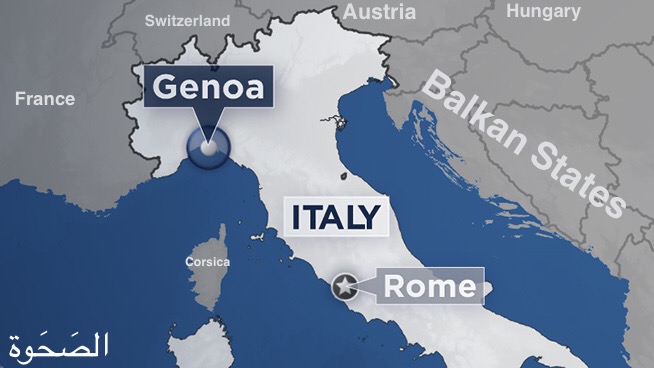 Today in the second day of rescue missions, only seven of those pulled from the rubble survived.

Italian Prime Minister Giuseppe Conte declared the 12-month state of emergency as the 10’000-strong rescue team, which includes 400 firefighters, continues to work at the scene in Genoa.

A fear the remaining structure may collapse has led to the evacuation of some 630 people who live near the Morandi Bridge.

Yesterday a large central section of motorway bridge collapsed during a heavy rain storm leaving at least 35 cars and 3 heavy goods vehicles along with several kilo-tons of reinforced concrete to plumet 45 meters on to a rail line and into a river below. 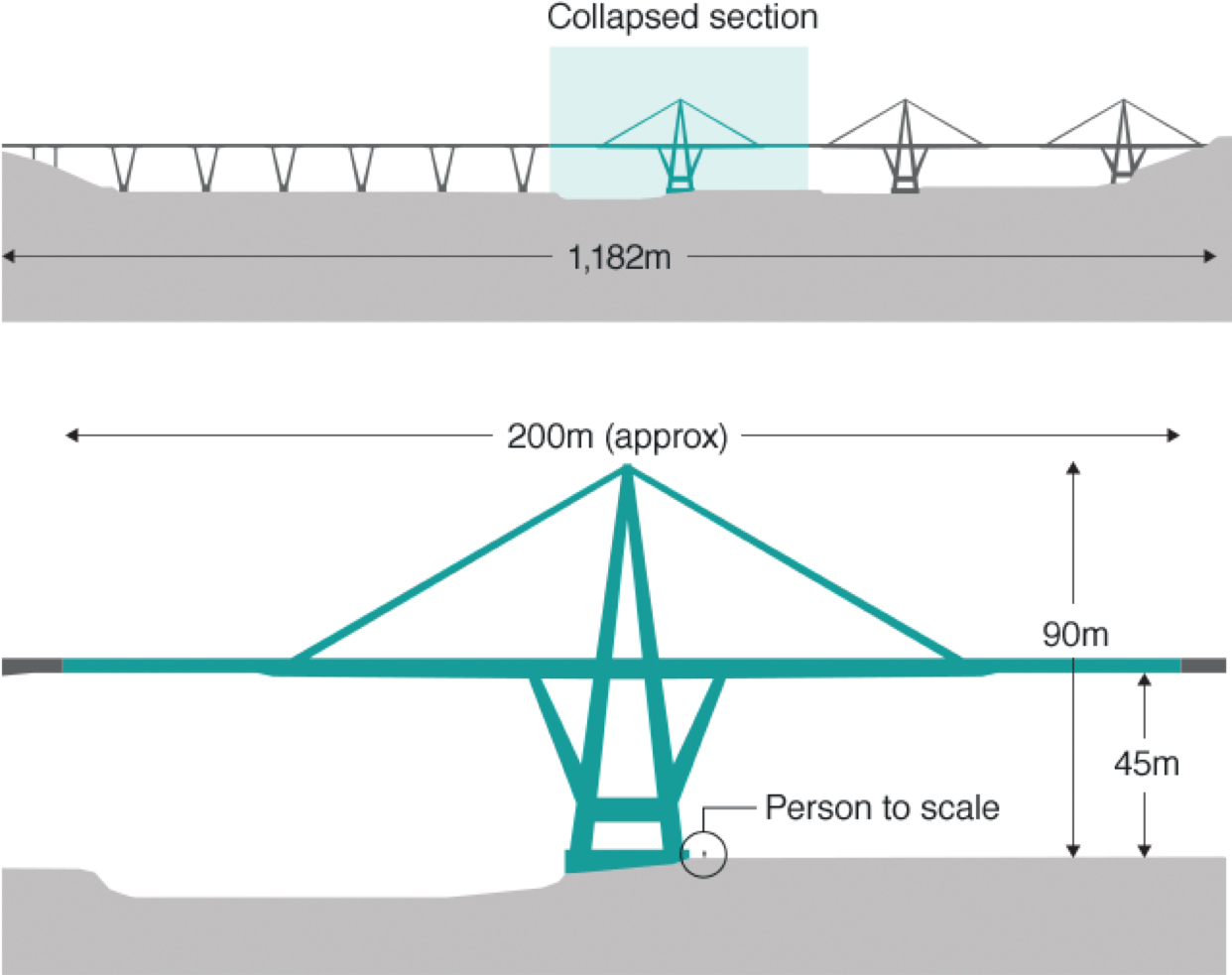 Italian prosecutors told the media that they do not believe the tragedy was an accident. 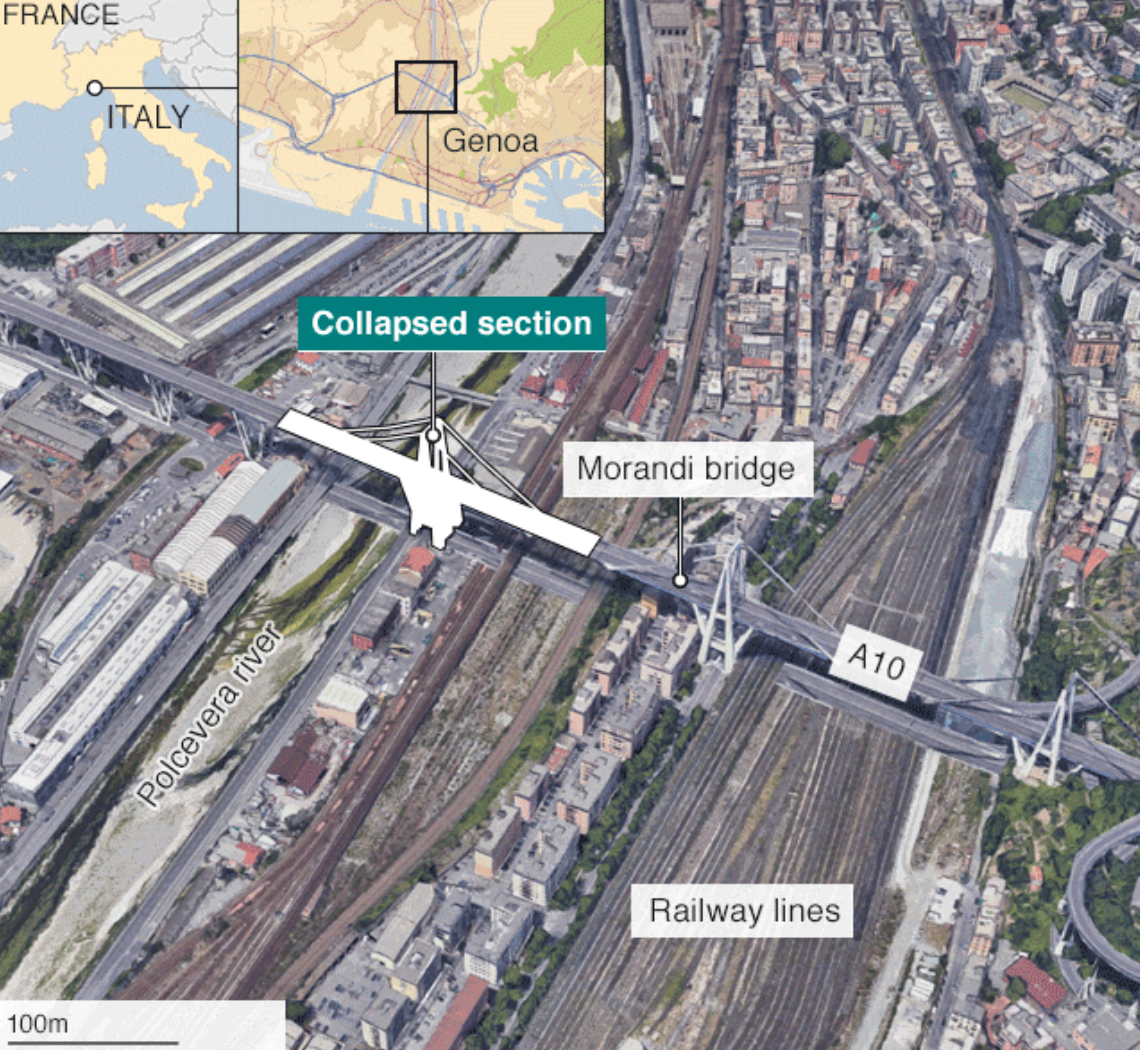 The investigation will looking the possibility that maintenance funds may have been embezzled leaving the bridge unmaintained during during years of Italian weather, which in a country with volcanos, earthquakes, deadly heatwaves, wild fires and floods can be quite extreme.

Genoa prosecutor Francesco Cozzi told reporters: “I don’t know if there is responsibility. For sure it was not an accident.”

Italy’s transport minister earlier called for the top management of Autostrade per L’Italia (Motorways for Italy), who managed the bridge, to quit and said its concession should be revoked.

However the firm has said the CEO and chairman are not intending to resign at this stage.

The middle of the 51-year-old bridge collapsed during a violent storm on Tuesday, just before lunch time the day before the Italian summer holiday season began.

The number of vehicles – and victims – could have been even higher, had it not been for reduced traffic. Tuesday was the eve of Italy’s biggest summer holiday.

Interior minister Matteo Salvini said three children – aged 8, 12 and 13 – were among the dead.

An unknown number of people are still missing.
Among the dead are a family of three who had been on holiday.

Ersilia Piccinino, her husband Roberto Robbiano and seven-year-old Samuele are believed to have died when their car plummeted to the ground.

Italian media reported that Samuele’s toys, including a Spiderman football, were found inside the wreckage of the family’s car.

Four of the victims are French, with three of them confirmed as young festival goers from Toulouse.

Two Albanians are also among the dead, as are three Chileans, who live in Italy.

On Wednesday evening, Italian officials released the names of 21 more Iitalian citizens whose identities have been confirmed and families informed. Their ages range from eight to 68. A further 9 bodies were recovered late on Wednesday evening. This brought the total number of fatalities to 39 by the end of the evening.

The Mayor of Sant’Agata di Militello, Bruno Mancuso, said on Facebook: “I am shocked and saddened by the terrible tragedy that struck our… young Marta Danisi, deceased following the collapse of the Morandi bridge in Genoa.”

He continued to say her boyfriend who was in the car with her had also died, and that “on behalf of the entire community, I express deep sorrow and closeness to family members for this great pain and emptiness that has affected them.”

Summer celebrations planned in the area were suspended until the 20th August as a mark of respect, he announced.

Dramatic testimony from those who escaped has emerged.

“I was basically just behind that pillar that collapsed. While I was loading the van, we felt something like a bomb going off. I don’t even know how to explain it. Straight away we looked at each other, me and my colleagues, wondering what has happened. We were covered in a lot of dust and debris. I don’t even know what it could have been.”

“As soon as we realised, we went outside to find that unfortunately the bridge wasn’t there any more,” he added.

“We stood there, terrified, but thankfully the police and fire bridge arrived. But we were certainly, I can say, more than lucky because I, 10 minutes earlier, had been passing right underneath that bridge to get in to work… and now that bridge isn’t there any more. I feel like a very lucky person… you see this dust everywhere and you don’t understand what could have happened – and what yet might happen because [part of] the bridge is still standing and it might come down any minute.”

As well as managing the rescue efforts, two additional pressing issues facing those working to deal with the collapse are the fear that gas pipes in the area may begin to leak following the impact and that the flood-prone city may have a new crisis if the debris isn’t cleared soon.

The piles of rubble and huge sections of road lying in the dry riverbed could become a dam in a matter of hours if heavy rains hit the Mediterranean port city of 600’000.

The 1967 bridge was considered innovative at the time for its use of concrete around its cables but was long due for an upgrade. It was servicing more traffic than its designers could have ever envisioned.

Work to upgrade the bridge with a €20m project had already been approved.

Despite this, prosecutor Mr Cozzi indicated that no serious safety concerns had reached his office before the collapse on Tuesday, saying: “None of us would have driven over that highway 20 times a month as we do.” 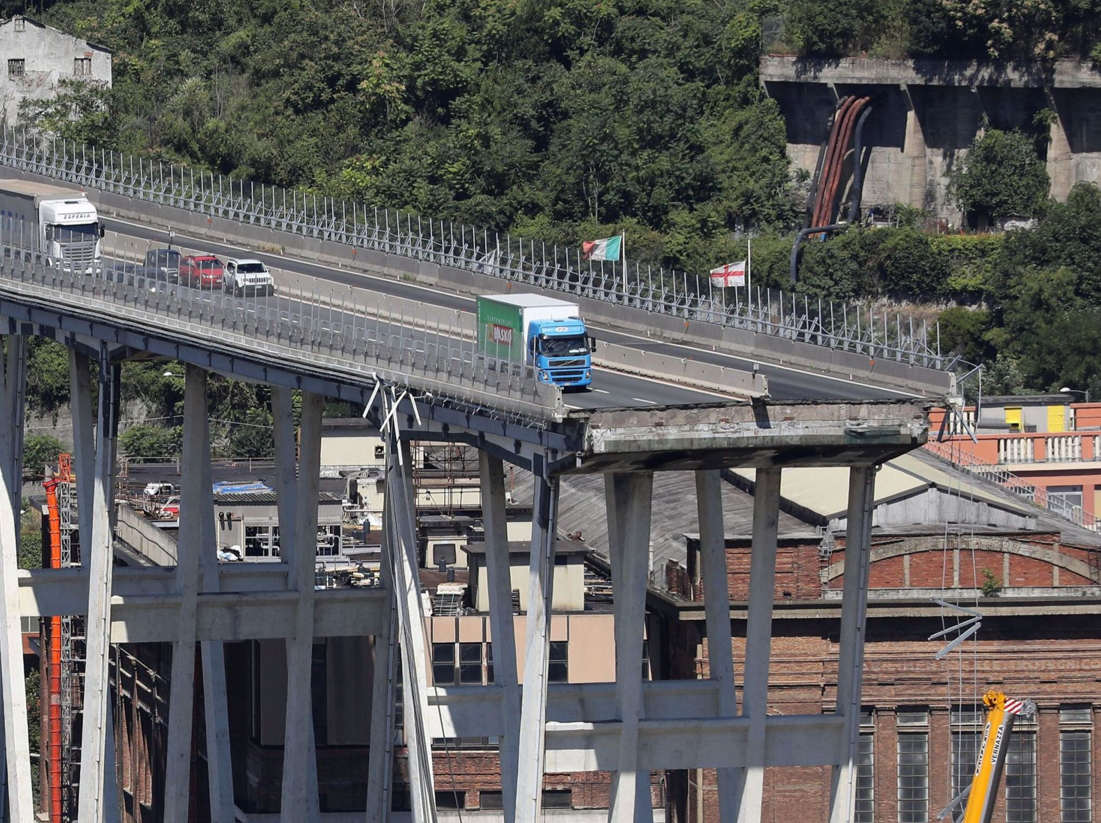 Vehicles remain abandon on the remaining sections of the bridge unable to be moved over fears of further collapse.

Members of the public are expressly warned to stay to stay away from the surrounding area for fear of further collapse, gas line explosion and/or flooding.