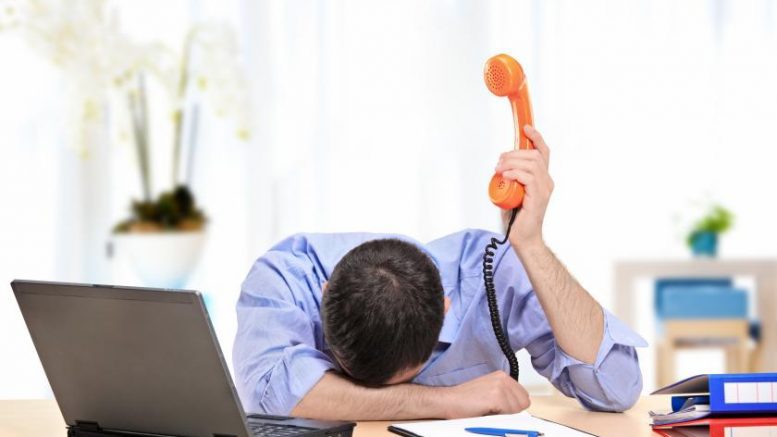 The healthiest and the best educated  countries in world

What exactly is human capital and can it be quantified?

You’d be right to wonder. It is defined as the ‘total of a population’s health, skills, knowledge, experience, and habits,’ by World Bank President, Dr Jim Yong Kim, the concept can seem nebulous and difficult to measure.

Seen as a companion quantitative index to the UN’s Quality of Life Index which aims to measure the population’s peace, security, health, wealth and happiness.

Now, a team of academics from the Seattle-based Institute for Health Metrics and Evaluation has come up with a scientific ranking of 195 countries.

Their calculations are based on analysis of more than 2’500 survey and censuses databases and aim to quantify the number of productive years an individual can be expected to work between the ages of 20 and 64, taking into account education and health.

Productive Years calculated by adding up the number of hours worked post qualifications and training, minus any holidays, breaks, illness, strikes or other breaks.

EU member nations dominate the top of the table, comprising eight of the top 10, with Finland, Iceland and Denmark making up the top three, a trio unchanged since 1990.

Niger came bottom of the list, along with Sudan and Chad. And the difference is stark: Finland’s level of expected human capital was 28 years, compared with two years in Niger.

Perhaps most interesting is the list of countries that are rising, with Turkey achieving the most dramatic increase in the rankings – jumping to 43rd on the list, from 102, and achieving improvements in each component of the index. The nation yielded expected human capital of 20 years in 2016, up from eight years in 1990.

On it’s own the Human Capital Index can be misleading, coupled with Quality of Life Index we can see which countries are unproductive but happy and healthy and relaxed, which are productive and chilled and which are over worked and dying.

The UK, Balkan States, USA and India came bottom in the cross-index table. Working the longest hours with the lowest quality of life when multipled by the number of hours spent on personal development and recreation.

Other big gainers include China, Thailand and Brazil. 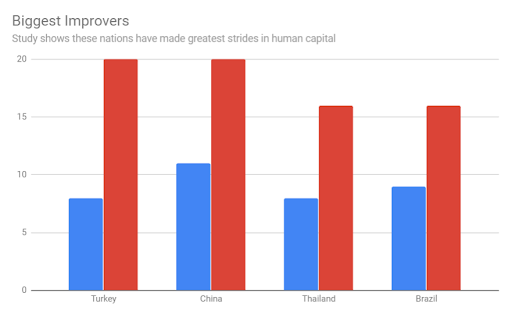 The findings are significant because they underscore the importance of investing in people, and because the researchers found nations with greater improvements in human capital also tended to have faster economic growth.

This was true for Turkey, China, Thailand and Brazil, which all posted better economic growth over the period than peer countries with lower levels of human capital improvement. It is important to note that those countries also rose in quality of life during the period leading up to the rise in human capital output. 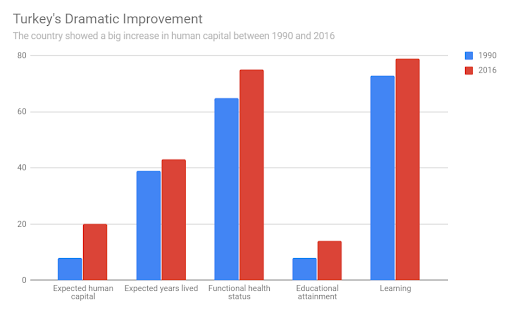 The findings echo the latest World Economic Forum Global Human Capital Report, which showed a nation’s human capital can be a more important determinant of its long-term success than any other factor.

The biggest hinderances to a country’s success in human capital are overly stringent immigration policy and a low quality of life. Countries with strict immigration policies and poor police-public relations such as the USA and UK dropped the most over the same period.

That report showed how, on average, the world has developed only 62% of its human capital, or, in other words, that nations are wasting about 38% of their talent.

The Institute for Health Metrics and Evaluation researchers highlighted specific policy reforms that had probably contributed to boosting human capital.

Turkey started its Health Transformation Program in 2003, resulting in expanded access to healthcare, while Brazil began education reforms in 1995, leading to more equal funding and better student testing. The academics also pointed out that Thailand was one of the first middle-income countries to achieve universal health coverage, with a public insurance scheme in 2001 and a shift toward service provision through primary care centres.

“As the world economy grows increasingly dependent on digital technology, from agriculture to manufacturing to the service industry, human capital grows increasingly important for stimulating local and national economies,” said Dr Christopher Murray, director of the Institute for Health Metrics and Evaluation at the University of Washington.

“Our findings show the association between investments in education and health and improved human capital and GDP, that policymakers ignore at their own peril.”