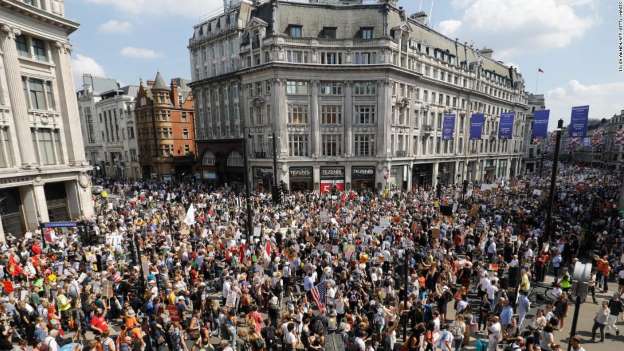 New IMF report puts Britain’s finances weaker than all other nations except Portugal, and says privatisation is to blame

‘Pundits will say that neoliberalism is about markets and choice – tell that to any commuter wedged on a Southern rail train… if you can fine one that runs.’

Ask a question, a big one.

What price is paid when a promise is broken?

The political class has made this pledge: that the best way to run an economy is to cut back the public sector as far as possible and let the private enterprise run free.

Survival of the financially fittest.

Money can buy you justice, health, freedom and eradicate obstacles, regardless of what, or who, they may be. Capitalism gone wild, forget the 1% it’s the 0.1%.

This way, they say, services operate better, businesses get the resources they need, and our national finances are healthier. (Or at least the bank accounts of those in charge).

The reality is, one has to wait longer to see a hospital consultant and even then the NHS services are rationed – because David Cameron slashed public spending, to stop it “crowding out” private money.

It’s why water bills are so high and train services can never be counted on – because both industries have been privatised.

It is the reason nothing in Portugal or the UK seems to work and everything you touch is covered in adverts and pay walls, including toilets, an ever more rare and expensive commodity to drive away the poor.

They failed to control the finance sector and sold off their assets. Austerity was bound to follow .

Yet from the 2008 mega crash, that financially crippled the world beyond levels of the infamous 1920s’ Great Depression, only two nations remain in a seemingly endless downward spiral; Portugal and the UK.

Corruption has been blamed in both cases. With both nations seeing unprecedented levels of anti government protest.

From the debacle of universal credit to the forced conversion of state schools into corporate-run academies, private jails and police and even the use of private armies, the ideology of the small state – defined by no less a body than the International Monetary Fund as neoliberalism – is all pervasive.

Cost of living : Income : Freedoms : Quality of Life puts the UK as the poorest nation on Earth

It decides how much money you have left at the end of the week and what kind of future your children will enjoy, and it explains why your elderly relatives can’t get a decent carer.

It is the reason the age of retirement is higher than the average life expectancy.

The reason London has the highest homeless rate in the entire world.

The reason London has one of the highest murder rates in the world dwarfing those of New York, Cape Town and Lagos.

It is a mistaken belief: that running a small state is the soundest financial arrangement for governments and voters alike.

Because 40 years on from the Thatcher revolution, more and more evidence is coming in to the contrary.

Let’s start with the IMF itself. Last week it published a report that barely got a mention from the state run BBC or in Westminster, yet helps reframe the entire debate over austerity.

The IMF fund totted up both the public debt and the publicly owned assets of 31 global regions and nations, from the US to Australia, Finland to France, and found that the UK had the weakest public finances globally.

With less than £3 trillion of assets against £5tn in pensions and other liabilities, the UK is more than £2tn in the red, and growing at a phenomenal rate with no realistic chance of solvency.

Of all the other countries examined by researchers, including The Gambia and Kenya, only Portugal’s finances look worse over the long run.

Almost as startling are the IMF’s reasons for why Britain is in such a state: one way or another they all come back to corruption and neoliberalism.

Thatcher loosed finance from its shackles and used our North Sea oil money to pay for questionable tax cuts for the super wealthy and overseas businesses.

The result is an over financialised economy and a government that is £1tn worse off since the banking crash of 2008, and it was £1tn in debt to even before the crash.

Norway has similar North Sea wealth and a far smaller sovereign wealth fund. Its net worth has however soared over the past decade and makes a comfortable financial surplus each year compared to Portugal and the UK’s enormous annual losses.

The other big reason for the UK’s financial precarity is its privatisation program, described by the IMF as no less than a “fiscal illusion”.

British governments have flogged nearly everything in the cupboard, from airports, prisons, police, military, transport to the Royal Mail – often at giveaway prices – to friends in the City. Such privatisations, judged the IMF report, “increase revenues and lower deficits but also reduce the government’s asset holdings, quality of services and long term profits”.

It’s the national equivalent of a payday loan to temporarily patch a debt who’s minimum monthly payments are more than your maximum potential income.

Throughout the austerity decade, ministers and economists have pushed for spending cuts by pointing to the size of the government’s annual overdraft, or budget deficit.

Yet there are two sides to a balance sheet, as all accountants know and the IMF recognises. The same goes for the public sector: if Labour’s John McDonnell gets into No 11 and renationalises the railways, that would cost tens of billions – but it would also leave the country with assets worth tens of billions that provided a regular income.

Instead, what this IMF research shows is that the Westminster classes have been asset-stripping Britain for decades – selling off to friends and family who make trillions in on going profits and stirring up financial trouble for future generations, robbing the nation blind and leaving it for dead to collapse in a post Brexit break up that could see the UK split into small countries run by the corporate elite and politically corrupt devoid of any Human Rights or ethics.

Privatisation and austerity have not only weakened the country’s financial position – they have also handed unearned wealth to a select few.

Just look at a new report from the University of Greenwich finding that water companies could have funded all their day-to-day running and their long-term investments out of the bills paid by customers.

Instead, managers have lumbered the firms with £51bn of debt to pay for shareholders’ dividends.

Efectively privatising the water then taking £51bn out of the water privisions leaving the public with dirty, polluted tap water that is unsafe to drink and the most expensive in the world.

Those ‘permanently borrowed’ billions, and the millions in interest, will be paid by you and me in our water bills. We might as well stuff the cash directly into the pockets of shareholders or flush it down the toilet and send it to their treatment plants that way.

Instead of competitively run utilities, record investment by the private sector and sounder public finances, we have monopolies handed over to the wealthy, banks that can dump their liabilities on the public when things get tough, and an outsourcing industry that feasts upon the carcass of the public sector.

As if all this weren’t enough, neoliberal voices complain that we need to cut taxes and red tape, and further starve our public services.

Whats left of the pittyful NHS is carved into services that the poor can’t afford as their national health insurance, compulsorily taken at source from their income still requires them to pay a ‘contribution’ to treatments and services such as medicines and dental check ups. Meaning that millions of working people with health insurance still can’t afford basic medical care. The UK currently has more preventable deaths each year due to poverty and inaccessible healthcare than many third world countries. The UK came wel below The Gambia, Kenya, Tanzania, South Africa, Nigeria and Burkina Faso in this study.

This is a genuine scandal, but it requires us to recognise what neoliberalism promised and what it has failed to deliver.

Why the 2008 crash happened and why few countries are still suffering in an endless poverty trap on a scale never seen before.

Is this greed? Corruption? Or population thinning?

Some of the loudest critics of the ideology have completely misidentified it.

Academics will daub the term “neoliberal” on any passing phenomenon.

Centrist politicians claim that the great failing of neoliberalism is its carelessness about identity and place, which is akin to complaining that the boy on a moped who snatched your smartphone is going too fast.

Let us get it straight. Neoliberalism has ripped you off, robbed you blind and left you for dead, starving and unable to access a pension, education or healthcare.

The evidence of that is mounting up – in your bills, in your services and in the finances of your country and pocket.