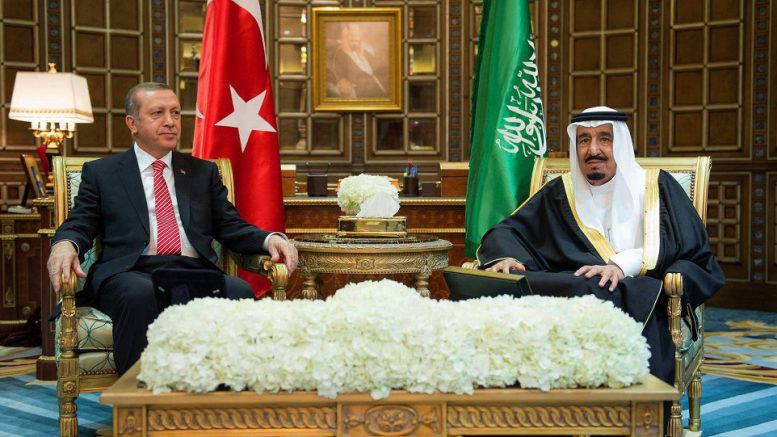 Not counting the neutral countries such as Oman and Switzerland, nobody seems to be batting an eyelid over the alleged murder and dismembering of an international journalist, Khashoggi, in the Saudi Arabian embassy, but why?

President Recep Tayyip Erdogan of Turkey laid out on Tuesday his suspicion of what he called the “premeditated murder” of the journalist Jamal Khashoggi at the Saudi Arabia consulate in Istanbul, and demanded that the Saudi suspects face investigation in Turkey.

After saying he would reveal “the naked truth” about Mr. Khashoggi’s death, Mr. Erdogan, in his first extended remarks on the case, sketched out the chronology of a broad operation and offered some new details of the Turkish investigation.

The team of Saudi officials that arrived in stages in Istanbul included generals, he said, and the Saudis conducted what appeared to be reconnaissance in rural areas outside the city where investigators have been searching unsuccessfully for Mr. Khashoggi’s remains.

It is important to note that no party has yet been formally charged with a crime, no body discovered and no admission of any crime on any part.

“It is clear that this savage murder did not happen at the drop of a dime but was a planned affair.” Mr. Erdogan said, challenging the official Saudi account that the journalist was accidentally killed in a heated argument, turned fist fight inside the consulate.

The speech made clear that Mr. Erdogan had no intention of dropping a case that has created an international furor, and that he would press the Saudis for an honest accounting of a killing that he pointedly noted occurred inside his country.

A country where he has defended military coups, allegedly orchestrated by the US and UK. A country where his support and approval ratings dwarf anything any western leader has ever seen. A country often at odds with Russia and the US but a strong military and trading ally non the less of both nations as well as the EU, GCC, Iran, China, India and Brazil.

He posed a series of tough questions, throwing down a challenge to Saudi Arabia’s leadership.

“Why was the 15-man Saudi team in Istanbul on the day of the murder?” he asked. “On whose orders? We are seeking answers. Why was the consulate not opened to investigators immediately? When the murder was so clear, why were there so many different statements given by Saudis? Why has the body of someone, the killing of whom has been officially admitted, not been found? Who is the local collaborator who disposed of Khashoggi’s body? Saudi must answer all these questions.”

Mr. Erdogan’s much-anticipated address, to the weekly gathering of his party in the Parliament chamber in Ankara, came after more than two weeks of carefully orchestrated leaks to the news media by Turkey that implicated the highest levels of the Saudi government, in the death of Mr. Khashoggi on 02 October 2018.

Saudi Arabia has said that 18 officials were under investigation in the killing, but Mr. Erdogan said that he would call King Salman Al-Saud, King of Saudi Arabia and insist that the case be adjudicated in Istanbul, not Riyadh or elsewhere in Saudi Arabia.

The Saudi government maintained at first that Mr. Khashoggi had left the Saudi consulate in Istanbul alive and well before reversing course.

Since admitting on Friday that Mr. Khashoggi had been killed inside the consulate, Saudi Arabia has claimed that his death was accidental and that the operation was not authorized by the crown prince or any other member of the Royal Family.

Turkish and Western intelligence officials and politicians have rejected that account as not credible, and Mr. Erdogan made clear in his speech on Tuesday that he held the same view.

Without naming names, he said those responsible, no matter how high-ranking, must be held to account.

Mr. Erdogan largely confined himself to confirming and adding some details to what his government had already leaked to the news media, rather than dropping new bombshells.

Erdogan did not mention Turkish officials’ claims that his government has audio and video recordings of the killing, and that Mr. Khashoggi was dismembered with a bone saw in the consulate.

Mr. Khashoggi, 59, was a Saudi Arabian by birth having lived in Turkey and the US, working for US newspaper The Washington Post.

Khashoggi had been close to members of the Saudi royal family and to Mr. Erdogan, but became a critic of the kingdom as the powerful Saudi crown prince, Mohammed bin Salman Al-Saud, cracked down on dissent. Mr. Khashoggi, who wrote columns on the subject for The Washington Post, moved last year to the United States.

His death has badly damaged the reputation of the kingdom after Prince Mohammed made such progress earlier this year in improving women’s rights and lifting the decades long ban on cinemas.

Prince Mohammed had held himself out as a leader with plans to reform Saudi Arabia’s economy and society. Even with the current Khashoggi crisis the domestic support for the prince especially amongst female citizens is at a record high level. For the man who gave them freedoms, cars, driving licenses and cinemas, they have unconditional respect and forgive any allegations.

Shortly before Mr. Erdogan spoke, the Saudis opened a much-anticipated investment conference in Riyadh — though in response to the Khashoggi killing, many government officials and financial leaders from around the world had pulled out of the event. Notably the UK and US actually increased military and oil deals with Saudi Arabia in the wake of Khashoggi, the bankrupt UK making a £2tn oil bin alone. (The UK currently is loosing £2tn a year in it’s destroyed Brexit-economy). Oil and arms deals with Saudi Arabia would see the UK avoid an otherwise inevitable IMF 3rd world bailout, something that in Europe, only now prosperous Greece has ever seen before.

The scandal has soured relations between Saudi Arabia and the Western nations — and worsened the already frosty dealings between Turkey and Saudi Arabia, two regional giants.

Hours before Mr. Erdogan’s speech, the newspaper Sabah, which is known for its close ties to the presidency, published details that portrayed the attaché of the Saudi Consulate in Istanbul, whom they named, (Al-Sahawat Times will not name those accused on ethical grounds) as the main orchestrator of the murder.

The deputy head of the consulate, was the main Saudi intelligence representative there, the newspaper additionally reported, citing Turkish officials.

The Saudi attaché, was at the consulate when Mr. Khashoggi visited it on Sept. 28; flew later that day to the Saudi capital, Riyadh, and met with the deputy chief of Saudi intelligence, Ahmad Asiri; and returned to Istanbul on Oct. 1 Sabah reported.

The newspaper described the key personnel as the “black box” of the operation,” and said their movements had been tracked by Turkish intelligence and photographic evidence gathered by the Turkish police.

The report was another in a steady stream of anonymous leaks and public statements from Turkish officials over recent weeks that pointed to a premeditated plan at the highest levels of the Saudi government to kill Mr. Khashoggi, undermining Saudi denials and keeping up international pressure on the kingdom to come clean.

On Monday,Turkish officials anonymously leaked images of a Saudi official who resembled Mr. Khashoggi and dressed in his clothes after he was killed, walking around Istanbul, creating a trail of surveillance camera images that appeared to have been intended to support the original Saudi narrative.

Saudis briefed on the matter have since confirmed the ruse according to local media in Istanbul.

The use of a look-alike bolstered the Turkish case for premeditation, and at the least, showed an attempt to cover up the killing.

On Monday, the spokesman for Mr. Erdogan’s Justice and Development Party, Omer Celik, described the death of Mr. Khashoggi as “monstrously planned.”

Mr. Khashoggi went to the consulate on Sept. 28 to request documents confirming his divorce, so that he could marry his fiancée.

Mr. Khashoggi was killed on Oct. 2 after he returned to the consulate, about 13:15, to pick up the paperwork he had requested.

The same intellegence official flew out of Ataturk Airport at 21:00 that night, Sabah reported.

A team of 15 Saudis who flew to Istanbul on the day Mr. Khashoggi died, have been identified by Turkish officials as being involved in the killing. They all left the country hours after they had arrived.

Prince Mohammed has since expressed his deepest condolences for the Khashoggi family and insisted that those involved in the incident has gone rouge and not acted on any official orders.

Saudi Arabia officially maintains that a fiat fight broke out in the embassy and any injuries and loss of life were entirely accidental.

This is is a version of events that has polarised observers from across the globe.