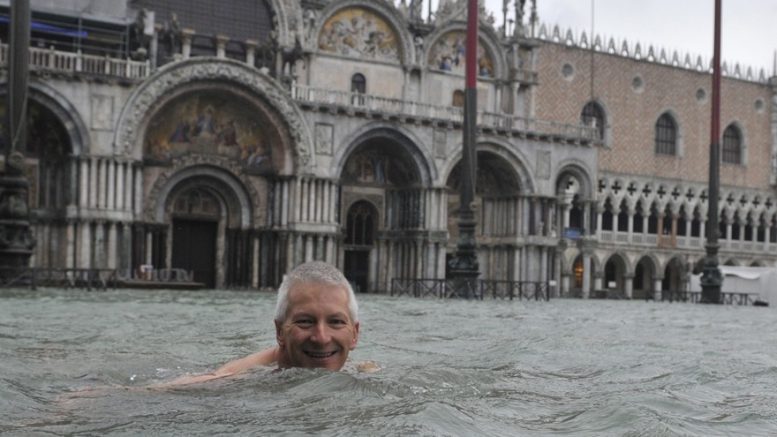 The Italian government has issued a CODE RED PROTOCOL in Venice for the first time since 2012.

Water transport services were halted across Venice as 75 per cent of the city centre flooded to a minimum depth of 156cm (5ft 2.5 inches) by early afternoon, the highest level since the devastating floods of 2012.

Residents and visitors were wading through waist-high water in St Mark’s Square before the mayor gave the emergency CODE RED PROTOCOL orders to evacuate the area. Shortly after the evacuation the waters rose to levels higher than some residents’ heights.

Police wearing hip waders carried a number of children to safety as stranded tourists waited to be ferried to higher ground as waters continued to rise above the first story of some buildings.

“All of Veneto is in code red alarm for this wave of bad weather,” said Luca Zaia, the regional president, warning that conditions could match historic flood levels of 1966.

Venice is accustomed to “acqua alta” (high water) and has a complex monitoring system in place for measuring the ebb and flow of water in the city. In 2003, Italy began construction on a massive system of surge protection gates around Venice, but fifteen years and €5.5 billion euros later the project still remains unfinished.

Streets, schools and public transit systems were closed across the country, with a number of coastal cities and mountain regions on high alert for flooding and landslides due to high winds and heavy rains that authorities said were responsible for at least three deaths and more than a dozen injured.

In Sardinia and Elba, winds reached 160km/h, causing authorities to halt ferry service to the islands.

Civil authorities reported weather-related transportation and infrastructure disruptions from the northern province of Bergamo in Lombardy to the wind-whipped strait of Messina, in Sicily.

Rome residents were urged to stay inside and avoid travel as authorities in the capital reported at least 15 people had been injured. Near Naples, authorities closed the popular Pompeii archeological ruins and evacuated visiting tourists.

Sticking out into the Mediterranean bridging Europe and Africa, Italy is in the direct firing line of many high force storms and is no stranger to massive high waters, volcanos and earthquakes, yet Venice with its sinking grounds and rising waters is in a more precarious situation than others.

Any one worried about missing loved ones or trapped and unable to find dry ground is urged to call the Italian emergency services as soon as possible.

Those in flood areas are advised to move to higher grounds and stay indoors.