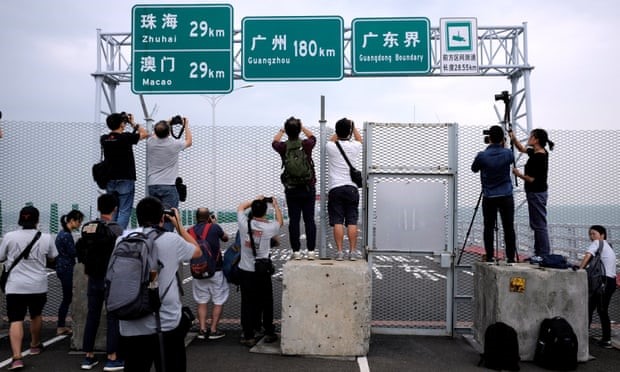 For decades Italy has attempted to connect to Sicily by bridge or tunnel but has failed short at every attempt due to strong Sicilian independence sentiment and local sabotage.

Spain has frequently considered linking itself to North Africa by bridge or tunnel but their plans never reached fruition.

So the baton passes to China to take the reigns and build the world’s longest bridge. The bridge however is not without its political opposition.

This Chinese project is one of the most criticised initiatives in Hong Kong, where the bridge is seen as another way for Beijing to extend its control.

The world’s longest sea bridge is set to open this week, linking Chinese mainland with the island cities of Hong Kong and Macau. This is seen by some activists in Hong Kong as part of a broader contentious plan to integrate the special administrative regions into China.

Hong Kong was invaded by the British and repatriated to China in the 1990s. Since then a small but vocal group of activists have rejected rule by anyone, British or Chinese.

The $20bn USD Hong Kong-Zhuhai-Macau bridge officially opens on Tuesday in a ceremony that Chinese president Xi Jinping is reportedly planning to attend. Officials are billing the 55km bridge as a key part of the Greater Bay Area plan, a campaign to connect Hong Kong and Macau to 11 Chinese cities to form a high-tech region to rival Silicon Valley.

The bridge links Hong Kong’s Lantau island to Zhuhai on the southern coast of Guangdong province and the gambling hub of Macau, a popular tourist spot for Chinese visitors.

However, private cars will only be able to use it after applying for a special permit. The crossing will mostly be used by private shuttle buses and freight vehicles. The bridge will not be served by public transport.

Since its inception, it has been one of the most criticised initiatives in Hong Kong, where residents believe it is a poor use of taxpayer funds. Conservationists have blamed bridge construction for falling numbers of the threatened Chinese white dolphin. Others say the bridge is another way for Beijing to bind the autonomous administrative regions closer to China.

“It is a politically driven mega-project without urgent need,” said pro-democracy lawmaker Eddie Chu. Earlier this year, officials said traffic on the bridge would see about 25% less traffic by 2030 because of another competing bridge. “Basically it is redundant,” he said.

Under construction since 2009, the structure is supported by three cable-stayed bridges and designed to withstand winds of up to 340km an hour. A 6.7km undersea tunnel has been built to avoid disrupting shipping lanes, connected by two artificial islands.

Towers above the bridge are designed to look like dolphins, in honour of the white dolphin, Chinese knots and a boat’s mast, according to the bridge’s designer. The curves of the road are meant to resemble a snake.

Originally slated to open in 2016, the bridge has been dogged by construction delays, budget overruns, and safety issues. Nine workers have died and more than 200 others have been injured building the bridge. This year, six subcontractors have been fined for endangering workers.

Earlier this year, concrete blocks around the artificial island appeared to be floating away, prompting criticism of the quality of the bridge. Officials said the placement was deliberate.

Some say the bridge is not needed, given existing transport links to mainland China. “I don’t think people are too excited about it. It’s been dragged on for so long and it’s so expensive, and there are already means of going to the western side of the Pearl River Delta,” said Mee Kam Ng, a professor at the department of geography at the Chinese University in Hong Kong.

In some ways, the bridge does advance integration of the three cities. Commuters on the bridge will go through three different checkpoints for Hong Kong, Macau, and Zhuhai.

Yet regardless of the arguments against the project by activists, as a feat of engineering brilliance it is undeniable that China is stamping its name on the world again in a grandiose fashion. Whilst Saudi Arabia and Dubai are currently the world’s hubs for record breaking engineering followed by Japan and South Korea, China, once a world renown nation for engineering has once again re-entered the stage of A-Listers.