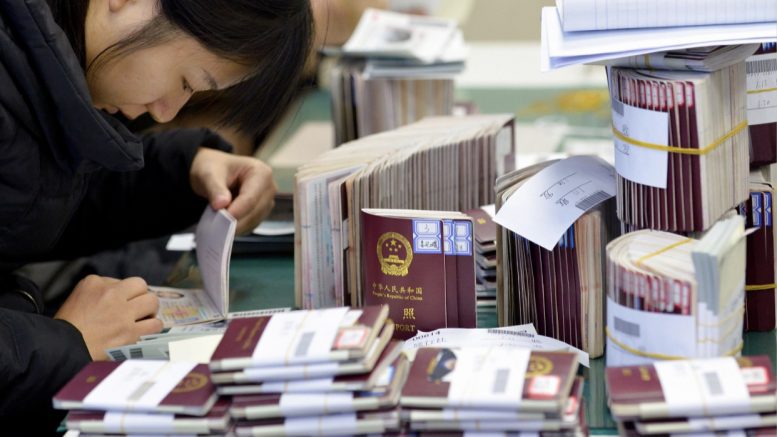 The rise of Chinese tourism

Consider this: Chinese tourism is a new phenomenon, just over two decades old. Before 1995, Chinese citizens weren’t allowed to leave the country, save for family visits to adjoining Asian countries, trips by government officials, business trips, permanent migration or some kind of cultural exchange.

Tourism, as we know it, was outlawed. However, China’s late Communist-era government, mindful of the crumbling parallel regimes elsewhere in the world, in the mid-1990s, decided to loosen travel constraints by introducing the Approved Destination Status (ADS) program.

For the first time since Mao’s rise, ordinary citizens could venture abroad on vacation, albeit via tightly regulated group tours overseen by officially sanctioned operators.

Since then, China’s thirst for travel has snowballed. The United Nations World Tourism Organization reports that Chinese outbound tourism expenditure grew to $261 billion in 2016, an increase of 12 percent from 2015 and 1’100 percent increase on the amount spent a decade earlier. That $261 billion? A cool 21 percent of the tourism world market.

Since 2016 although official figures have not yet been released the numbers have boomed even further. If Chinese tourists represented 21% of global tourism in 2016 it would not be unreasonable to assume that in late 2018 Chinese tourist account for a minimum of 1 in 4 global tourist dollars spent world wide.

Nowhere is the emergence of a new, overseas-venturing middle class more evident than at Britain’s Bicester Village, 60 miles northwest of London. This is the gateway to Europe’s premium outlet mall, where more than 150 brands from Balenciaga to Longines offload unwanted merchandise at up to 60 percent off. There’s an oh-so-English affect to the staffers guiding visitors from the station to the entrance, kitted out in scarlet red capes and pillbox hats like flunkies on loan from Buckingham Palace. It’s incongruous, then, to hear Mandarin periodically piped through the speakers on the platform; several of the greeters are fluent, too.

That’s because, among mainland Chinese tourists, Bicester is the second-most visited attraction in Britain (only Buckingham Palace beets it); yuan-toting designer bargain hunters provide 40 percent of annual revenue for the mall’s owner, per a report from consultancy firm Bain & Co.

Although most Londoner’s have never even heard of Bicester yet alone visited, in the Chinese tourism industry, Bicester is one of the most popular destinations in Europe.

The reason is simple: Full-price designer brands are cheaper in general in the EU than in mainland China—Chanel’s bags, for instance, will cost a third less here.

And the UK is king of basement clearance stores, selling off last seasons unwanted over-stock and seconds in specifically dedicated outlet malls. The UK’s native thirst for a bargain benefiting the Chinese tourist to whom even full EU price would be 34% off.

The Power of a Passport: Chinese tourism has boosted other destinations and routes, too, in some cases, unexpected ones.

Take Belgrade, Serbia, where Sara Simovic is head of sales and marketing for the just-opened Saint Ten luxury hotel.

“Eighty percent of our guests are foreign, and 15 percent of them are Chinese,” she says. “It was instant, as soon as we opened.” Simovic’s guests are interested in the historic capital, of course, but tell over and again about another visit-clincher: Though red tape persists for mainland citizens trying to access many countries in the world, Socialist Serbia allows visa-free access to Socialist Chinese passport holders.

The two nations are closely tied in trade, political and military alliances. When long time allies Russia failed to live up to their military alliance and promises of support for Serbia during the 1991-2001 Balkan Wars, the war torn Socialist Balkan nation under heavy international sanctions for genocide and war crimes turned to the other major socialist global super power.. China.

Serbia and the wider Balkan region also offers high quality counterfeit designer good at a higher quality and even lower price than China can offer. Which may entice tourists without the budget to go to Milan and blow a few thousand euro on a single item of clothing.

China did rise ten places in the rankings of Henley Passport Index this year; it tracks the power of passports by citizenship, essentially, how easy it is for the holder to travel visa-free.

Even so, China still hovers mid-list, at 75th. However experts say they expect it to climb further in the next decade as more countries follow Serbia’s lead and allow Chinese nationals to book short-term visits without visas.

Air Serbia scheduled a direct connection between Belgrade and Beijing not long after its government removed visa requirements for Chinese nationals in January 2017.

Don’t be surprised to see similar attempts by Barbados and St. Lucia to secure easier flight routes, with fewer connections, to mainland China; these island nations in Caribbean which was heavily influenced by Communism during the Cuba-USSR alliance, recently followed Serbia’s lead by axing visa requirements for Chinese visitors. “When somewhere is visa-free, it opens up the gates to Chinese travelers,” says Mark Wong, Asia Pacific VP for Small Luxury Hotels of the World, and an expert on Chinese outbound travel.

Anyone who has ever lived in Rome, Barcelona or London can tell you that Europe is a flood of Chinese tourists spending hard cash as if they printed it on their home printer.

It is considerably easier and cheaper for Chinese tourists to visit Europe than the other way around however for the Chinese tourism industry destinations are very simple:

Hotels in destinations on Chinese travelers’ wish lists are also adjusting accordingly, with or without visa restrictions.

Design tweaks include reducing the numbers of mirrors on the wall, and positioning beds away from facing the door—both concessions to feng shui (the former bounces energy, creating restlessness; the latter is the position of the dead). Meanwhile, a tendency for Chinese people to travel in multi-family groups means there has been a sharp increase in the number of so-called room adjacencies, where suites can connect. (The standard has long been 11 percent of all rooms, but Las Vegas hotel experts says they often sees briefs requiring 25 percent of all rooms to be interconnecting.)

Chinese business travelers of the same sex might be expected to share a room, so there are more twin bed options, too, he says.The hotel’s overall concept might be massaged to subtly resonate: Look at EAST Miami, for example, which is owned by Hong Kong–based Swire. Rather than a standalone hotel, it sits embedded in an entertainment complex with a mall and movie theater easily accessible, an approach that’s standard in Asia but less common in the US, a clear attempt to woo travellers for whom that’s the preferred setting.

Whatever its impact, though, mass tourism from China is only just beginning. Currently, 120 million Chinese citizens hold passports, about 9 percent of the population, compared to 40 percent of Americans and 95 percent of Brits, where a passport is a legally required document for even basic formal operations such as opening a bank account, buying a cell phone or going to a night club.

Jane Sun, CEO of China-based travel firm CTrip, expects the number of Chinese passport holders to hit 20 percent by the end of 2020 as the middle classes continue to grow, and direct air routes overseas from secondary and tertiary cities, think X’ian, Kunming, and more, continue to proliferate.

Zakary Dychtwald, a consultant to the tourism business in China, thinks her estimates might be overstated, but only slightly, citing Goldman Sachs data that predicts a rise to 20 percent by the start of 2025. Still, he admits, the future may surprise us: “There has proven to be a higher propensity to travel than many more conservative estimates have factored in.”

Dychtwald is the author of Young China, which reports on the “new” China and the millennials shaping China for the 21st century. Dychtwald notes that Chinese millennials are more numerous than their Western counterparts, and as many are only children, they’re showered with money to travel by their parents and grandparents: known as the 4-2-1 phenomenon—four grandparents, two parents, one child. “They grew up studying the world without being able to access it, watching foreign films, TV shows, and wearing foreign fashions, or replicas of them. For most, travel was a distant dream,” he says. “But getting this enormous, and growing, group of travelers to your country could mean a sizable impact on your economy.”