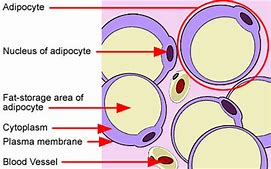 A new major study, published in the journal Cell Metabolism, challenges the current understanding of what causes diabetes. The findings will lead to new therapies.

This new research finds that the PKCɛ enzyme affects the health of fat cells.

Over twenty years ago, researchers then suggested that the action of an enzyme called protein kinase C epsilon (PKCɛ) in the liver may cause diabetes. This enzyme, the researchers postulated, inhibits the activity of insulin by acting on insulin receptors.
Since then, other studies have shown that knocking out the PKCɛ gene in mice protected the rodents from glucose intolerance and insulin resistance when they ate a high-fat diet.

However, the precise location where this enzyme was activated remained unclear. Now, this new study — led by Carsten Schmitz-Peiffer, an associate professor at the Garvan Institute of Medical Research in Darlinghurst, Australia – suggests that the liver is not responsible for activating the enzyme and spreading its harmful effects. Instead, fat tissue throughout the body is the culprit.

Obesity is a known risk factor for type 2 diabetes, and the current study adds to the mounting research that unravels the connection between body fat and the risk of developing the metabolic condition. Additionally, this new study may lead to novel strategies of disrupting the activity of PKCɛ, ultimately leading to new treatments.

Schmitz-Peiffer and et al fed mice a high-fat diet, thus inducing symptoms of type 2 diabetes, such as glucose intolerance and insulin resistance, in the animals. Insulin resistance occurs when the liver no longer reacts to insulin, the hormone secreted by the pancreas.

Schmitz-Peiffer et al explained the findings, saying: “The big surprise was that when we removed PKCε production specifically in the liver — the mice were not protected.”

“For over a decade,” continues the lead author, “it’s been assumed that PKCε is acting directly in the liver — by that logic, these mice should have been protected against diabetes.”

“We were so surprised by this, that we thought we had developed our mice incorrectly. We confirmed the removal and tested it in several different ways, but they still become glucose intolerant when given a [high-fat diet].”

“What we found,” explains Schmitz-Peiffer, “is that if we removed PKCε production solely from fat tissue, the mice were protected from becoming glucose intolerant, similar to when we removed PKCε from the entire animal.”

“So PKCε isn’t progressing diabetes from the liver, but in fact, it is acting from fat tissue to worsen the disease.” Explained Carsten Schmitz-Peiffer.

To determine the precise way in which PKCε affects fat tissue, the researchers examined how the enzyme affected the shape and size of the fat cells.

“And in [high-fat diet]-fed mice with PKCε intact — which are glucose intolerant — we saw more of the unhealthy, engorged fat cells, that tend to have less access to oxygen and become inflamed.”

This suggests to the researchers that adipose tissue may have a much more far-reaching effect on metabolic health than previously believed.

“We know that fat tissue is a lot more than just an inert mass for storing fat,” says Schmitz-Peiffer.

” It is a very dynamic organ, it sends many messages and releases factors that communicate with the rest of the body, including the liver.”

“If PKCε is changing the nature of fat and affecting the overall health of fat cells, it’s changing the types of messages it sends and factors it releases — which could be acting on the liver and possibly other organs to interfere with glucose metabolism.”

“These results give us an even better idea about how to target PKCε to develop the most effective treatments possible. And therapeutically targeting PKCε would be a new possible approach for diabetes treatment.”

The researchers plan to develop a drug which, when taken orally, might be able to interfere with PKCε.