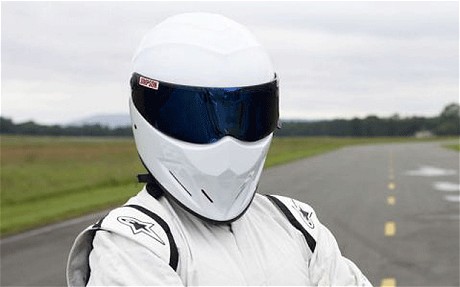 Many fans already think one MAN could not possibly do everything the Stig does – and now there seems to be proof.

The Stig is both a man AND a woman, according to a new sightings.

A woman was spotted carrying the infamous white helmet and a box labelled ‘The Stig’ into a cafe during Top Gear filming in South Wales on Saturday and later walking out dressed in the full gear.

Photos obtained by The Mail On Sunday reveal that she attempted to hide the helmet when she noticed photographers nearby.

There was also a dwarf actor playing a younger Stig with her as they filmed on the beach in the South Wales village of Pendine Sands.

Top Gear uses multiple “cousins” of the Stig in overseas episodes. In the past when’s Jeremy Clarkson was hosting the show these special Stigs received numerous complaints of racist stereotyping.

A local told the paper: “I saw the woman Stig get into the driver’s seat of a car, but I have no idea where they went.”

The Stig shows everyone how it’s done on BBC series Top Gear – but mysteriously never shows his or her face.

When the first ever Stig wrote his autobiography revealing his identity he was fired from the position which contractually requires secrecy.

The identity of the anonymous, petrol-guzzling driver remained a mystery for seven years until racing driver Ben Collins claimed the title.

But since the BBC show started in 2002, several names have been closely linked to the TV role.

Racing driver and stunt man Ben Collins decided to come out as the Stig in 2010, and consequently lost the job after seven years doing it.

A legal battle began between the BBC and Collins’ publisher kicked off when he decided to release an autobiography called The Man in the White Suit, which apparently broke the secrecy-based terms of his employment.

He had taken over from driver Perry McCarthy in 2004, who had been the Black Stig in the first two series and quit amid claims he was unhappy with his alleged £700-a-week salary and the secrecy involved.

Collins was in turn replaced by another White Stig, and as of today nobody knows who this one is.

Michael Schumacher lifted off the Stig helmet at the beginning of series thirteen to a rapturous viewer reception, but this was just a joke.

Before Collins came out as the Stig, it was reported that eight different drivers all shared the role, including Lewis Hamilton, Heikki Kovalainen, Chris Goodwin, Dan Lang and Julian Bailey.

In 2009, Bailey had already been named as a stand-in Stig by the original Black Stig, Perry McCarthy.

Many fans think one person could not possibly do everything the Stig does, particularly seeing as the driver has several relations and friends that have featured on the series, including Janet Stig Porter, Leisure Stig and Bunga-Bunga Stig.

The new series of Top Gear is returning soon with Paddy McGuinness, Freddie Flintoff and Chris Harris after Matt Le Blanc became the latest I. A long line of big names to quit the failing show.