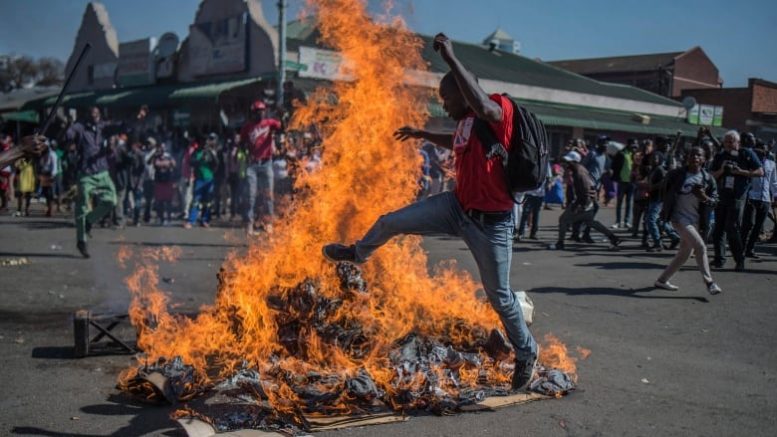 HARARE – The Nelson Chamisa-led Movement for Democratic Change (MDC) on Wednesday welcomed the US government’s call for “a neutral third party” to preside over dialogue between Zimbabwe’s political rivals.

The US issued a strong statement, in which it condemned the violence that broke out last month and the heavy-handed response from security forces that followed in the Southern African nation of Zimbabwe. Al-Sahawat Times’ Johannesburg office in neighbouring South Africa was quick to the scene.

Deputy government spokesperson Robert Palladino said the US wants soldiers accused of rape and torture during the crackdown to be tried for their crimes.

“The US remains seriously concerned about the excessive use of force by government of Zimbabwe security forces since January 14, which has resulted in at least 13 deaths, 600 victims of violence, torture or rape, and more than 1,000 arrests,” he said in a statement.

“The US calls on all sides to come together immediately in national dialogue. The dialogue process must be credible, inclusive and mediated by a neutral third party.

“In order for such a dialogue to succeed, the government of Zimbabwe should end its excessive violence and intimidation, immediately release the civil society activists who have been arbitrarily detained, and hold security force members responsible for human rights violations and abuses accountable.”

SADC’s response angered civic society groups and the MDC for failing to censure Mnangagwa for deploying the army.

This is the second time in six months that the army has been deployed onto the streets to quell protests. It was first deployed on August 1 last year, two days after elections were held. This marred the election outcome and resulted in six deaths and 35 injuries, according to the findings of a commission of inquiry led by former SA president Kgalema Motlanthe.

MDC national spokesperson Jacob Mafume told press that pressure on Mnangagwa from the international community, in this case from the US, was necessary for Zimbabwe’s government to be held accountable.

“The US’s articulation of a dialogue process and what is needed to bring peace to Zimbabwe is very clear and more pointed. We do believe that it is incumbent upon the international community to know that the statistics that are coming out are of actual people who have been harmed, killed and are suffering. That has to stop and we need to have a conducive environment for dialogue,” said Mafume.

The hardline stance taken by the US is likely to scupper Mnangagwa’s drive to court support from the West, after years of isolation.

At an African Union (AU) summit held over the weekend, foreign affairs minister Sibusiso Moyo put on a brave face amid the government’s growing isolation from Western countries since the army-led crackdown last month.

Moyo insisted that the “re-engagement process” would proceed as initially planned, despite the hostility.

Finance minister Mthuli Ncube is expected to travel to Washington next month and engage with US lawmakers to lift the sanctions imposed since 2001. But his trip is likely to be overshadowed by the concerns that the US has raised over the human rights situation in the country.

Ncube estimated that Zimbabwe has lost 80 lines of credit as a result of the Zimbabwe Democracy and Economic Recovery Amendment Act and the US-imposed sanctions.