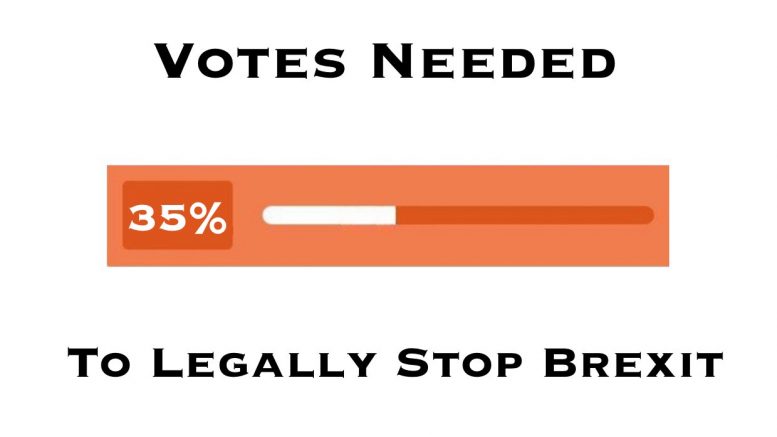 34.7% of the signature required to legally stop Brexit have now been secured (in just over one day). Sign HERE.

More than 5 million authenticated people have now signed signed the petition calling for Brexit to be immediately reversed. With well over one million protesters descending on Downing Street this weekend to call for Theresa May’s resignation and the end of Brexit.

A petition calling for Britain to remain in the European Union has received an unprecedented 3 million signatures in a little over one day, continuing to over 5 million over a weekend of protests.

The weekend saw the petition grow by an average of 56k verified signatures per hour 24/7 adjusted to remove bots and duplicate votes. This takes into consideration that well over a million people we actively marching through London this weekend.

Even if the petition were to reach 20 million, she would refuse to recognise it. A direct contradiction to democracy and more than a spark in the smoke filled bad smell of corruption lingering around all of the legal investigations into Brexit over false information, vote rigging and breaches in campaign laws. However this stance seems to have changed after threat of a coup from MPs and Business leaders across the capital. Middle Eastern, European and Asian investors are understood to have threatened to pull hundreds of billions in investment from the UK costing millions of UK jobs.

Many large corporations have already moved out of the UK and revoked UK investment. With hundreds of thousands of jobs already being lost to Brexit.

This week also saw Givernment controlled State Broadcaster BBC’s Radio 4 accuse Russia of rigging the 2016 Brexit vote to take the UK out of the EU and weaken the financial, political and military power of the UK of not pull it appart entirely with the loss of Scotland and Northern Ireland. It should be added that no evidence was put forward to support such claims and the Kremlin did not deem the comment worthy of formal response.

From a strictly legal point of view priament already has to discuss the petition. But should the petition break 17 million signature there would be cause for legal challenge to unilaterally revoke Article 50 and stop Brexit. As such the petition is 34.7% there. With a king way to go and only a few days to do it.

THE UK FARRIGHT attacked 6 mosques in Birmingham’s and the founder of the petition, 77 year old Margaret Georgiadou has received so many ‘viable’ death threats she has been forced into hiding in Cyprus.

The hero grandmother who started the political petition on Wednesday had the email and personal accounts hacked and death threats by telephone within hours of the petition going live.

Speculation the prime minister will be ousted is at fever pitch, with The Sunday Times reporting 11 cabinet ministers had told them they want Mrs May to move aside and make way for a replacement.

Her de facto deputy David Lidington has been named as her potential caretaker replacement, while several are said to be ready to throw their weight behind Environment Secretary Michael Gove.

A significant number of MPs told sources that May could be forced out in as little as 10 parliamentary days from Monday. Making the petition the single largest peaceful democratic political stand against the government in UK history.

The chancellor Philip Hammond suggested he was open to the proposition of a second Brexit referendum in light of the petition and peaceful protests in London this weekend as he warned “self indulgent” cabinet colleagues plotting to oust Theresa May that changing leader would not solve the impasse gripping Britain.

Philip Hammond acknowledged that Tories are “very frustrated” but stressed the Commons must find a majority for a Brexit option that avoids no deal, acknowledging a second referendum on the prime minister’s deal was a “perfectly coherent proposition”.

Revoking Article 50 and a second referendum are now believed to be two of seven options wing put to a parliamentary vote next week.

While chances of success for the petition remain slim, the fact that there is a chance at all will undoubtedly spur on many more to sign.

Remember to sign you need a valid UK postcode and email address and need to be a valid UK citizen. Duplicate votes risk having all of your votes discounted. Keep it clean, keep it democratic, keep it counting!