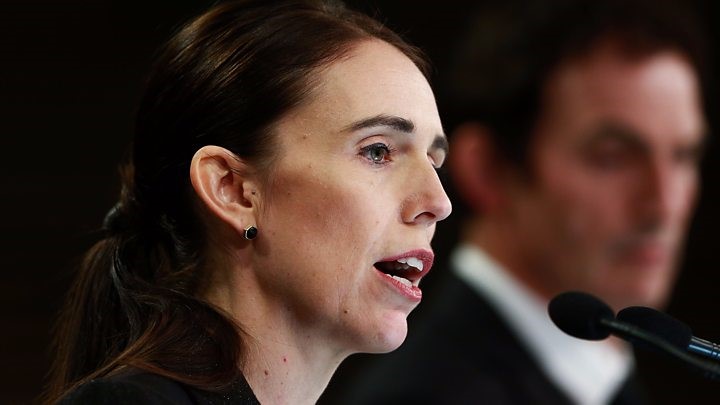 Thousands of people have gathered in Hagley Park, near the Al-Noor Mosque, to mark Friday’s national day of reflection for the victims of the Christchurch massacre

Australian Brenton Tarrant, a self-proclaimed white supremacist, has been charged with one murder and is expected to face further charges including specific terror offences.

This Friday was a chance for Christchurch residents to bring those sentiments together in one place at the same time and to pay their respects to the dead.

In an address before the Adhan (Muslim call to prayer), was broadcast on national television and radio at 13:30 local time to mark Jumma’ (Friday Prayers) and was followed by a two-minute silence, Ms Ardern said: “New Zealand mourns with you, we are one.”
“I know many New Zealanders wish to mark the week that has passed since the terrorist attack and to support the Muslim community as they return to mosques.” she said.

“How we choose to reflect during the silence will be different for each of us. Everyone should do what feels right for them, wherever they are – at home, at work, at school.”

The Imam of Al-Noor mosque, Gamal Fouda, was there when the attack happened and said the gunman “broke the hearts of millions around the world”.

“Today, from the same place, I look out and I see the love and compassion,” he said.

“We are alive, we are together, we are determined to not let anyone divide us.”

“According to the Prophet Muhammad (SAWS)… the believers in their mutual kindness, compassion and sympathy are just like one body. When any part of the body suffers, the whole body (referring to the one Umma) feels pain.”

People flocked from all corners of the city, flowers and messages of sympathy were laid at the foot of the park’s towering oak trees.

Non-Muslim women in New Zealand were wearing a headscarf as a show of solidarity for the day. To show respect for the men, women, elderly, children and babies murdered.

Observer, John Clark, said the message was profound: “People will be rethinking how they react, how they think, and how they speak sometimes – it’s penetrated to that level of society’’.

“We like to think that we’re a liberal community, but we know that there are dark parts,” said Mr Clark, 72. “It will positively affect New Zealand and maybe we’ll have even more to offer the world.”

Many mosques across the country had opened their doors to visitors, and human chains were formed outside some in symbolic acts of protection and support.

The traditional New Zealand war dance, a symbol of unity and protection was performed across the entire nation by people of all ethnicities and faiths, from schools to communities to official performances.

Meanwhile, government officials worked into the night to prepare the mosque and the bodies of victims for a mass funeral in Christchurch later on Friday.

A mass funeral was held for 30 of the dead, including the youngest victim Mucaad Ibrahim, aged three, who was killed at Masjid Al-Noor.

Like thousands of others in the city of Christchurch, people were struggling to come to terms with the horror of last week’s attacks.

All week advertising hoardings have been beaming positive messages back onto the streets: “This isn’t us”, “Kia Kaha Christchurch” and “No room for racism here”.

When the tributes were over people started pouring out of the park, back into the city and their everyday lives.

The reaction from New Zealand was so positive and different from that of other western nations such as the UK, where 6 mosques were attacked in the same week with hammers, and nothing was done to officially condemn the violence. After the Finsbury Park Mosque terror attack last year the UK was criticised heavily for its response.

In stark contract Dubai illuminated the world’s tallest building the Burj Khalifa with an image of the New Zealand PM as a thank you for her strong and peaceful response. (Read Here…)

The deputy PM however was quickly discredited and disowned by fellow New Zealanders and MPs after he claimed that the Muslim community should ‘expect’ such attacks.