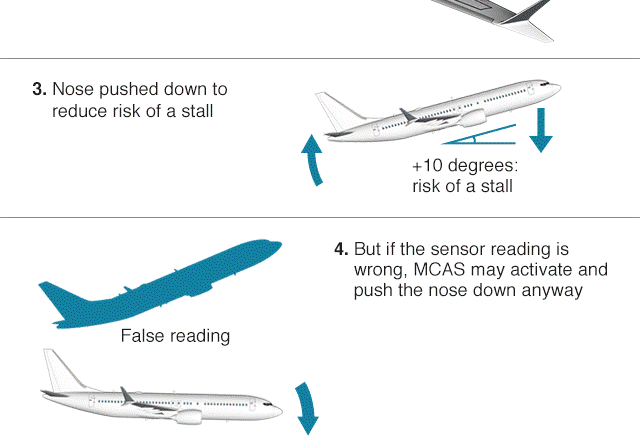 The Ethiopian Airlines plane that crashed last month nosedived several times before it hit the ground, a preliminary report has found

Pilots “repeatedly” followed procedures recommended by Boeing before the crash, according to the first official report into the disaster.
Despite their efforts, pilots “were not able to control the aircraft”, Transport Minister Dagmawit Moges said.
Flight ET302 crashed after take-off from Addis Ababa, killing 157 people.

It was the second crash of a Boeing 737 Max aircraft in five months.

Last October, Lion Air flight JT 610 crashed into the sea near Indonesia killing all 189 people on board.

In a news conference in Addis Ababa, Ms Dagmawit said: “The crew performed all the procedures repeatedly [that were] provided by the manufacturer but were not able to control the aircraft.”
Her comments were based on a preliminary report into the crash, which has not been published yet, but could be released by the end of the week.

The 737 Max family of aircraft was grounded following the Ethiopian Airlines crash, a move affecting more than 300 planes.

The preliminary report did not attribute blame for the crash and did not give detailed analysis of the flight.
But it did suggest that Boeing review the aircraft control system and said aviation authorities should confirm the problem had been solved before allowing the 737 Max back into the air.

In a statement, the chief executive of Ethiopian Airlines, Tewolde GebreMariam, said he was “very proud” of the pilots’ “high level of professional performance”.
“It was very unfortunate they could not recover the airplane from the persistence of nosediving,” the airline said in a statement.

Investigators have focused their attention on the Manoeuvring Characteristics Augmentation System (MCAS) – software designed to help prevent the 737 Max from stalling.
The software reacts when sensors in the nose of the aircraft show the jet is climbing at too steep an angle, which can cause a plane to stall.

What happened to the Lion Air flight?

An investigation into the Lion Air flight suggested the system malfunctioned, and forced the plane’s nose down more than 20 times before it crashed into the sea.
The preliminary report from Indonesian investigators found that a faulty sensor on the aircraft wrongly triggered MCAS without the pilots’ knowledge.

Boeing has been working on an upgrade of the MCAS software since the Lion Air crash.
It has said the system can be disabled – allowing pilots to regain control if there appears to be a problem.
But the latest comments from Ethiopian officials suggest that pilots could not regain control, despite following procedures recommended by Boeing.

What does the report mean for Boeing?

Two crashes, five months apart, with a total of 346 people dead.
Both preliminary crash reports suggest a new design to the 737 Max 8 malfunctioned, pushing each plane repeatedly into a nosedive.
One lawsuit has been filed. More are likely.
The suffering of those who’ve lost loved ones can’t be quantified. But the commercial toll for the manufacturer and damage to its reputation, at this stage, can’t be either.
Hundreds of 737 Maxs are grounded worldwide. Thousands of orders are, for now on ice, and some could even be in jeopardy.

The Max was Boeing’s answer to Airbus’ A320: a single-aisle, fuel-efficient short-haul plane.

But in the opinion of one experienced 737 pilot, the new anti-stall system, which was added to the aircraft and contributed to both crashes, was “flawed”.

Boeing is working to fix it. It needs to get the aircraft certified as safe and back in the air as soon as it can.

What has Boeing done since the crash?

Boeing has issued guidance to pilots on how to manage MCAS.
It plans to install an extra warning system on all 737 Max aircraft, which was previously an optional safety feature.
It is also revising pilot training to provide “enhanced understanding of the 737 Max” flight system and crew procedures.

The plane maker says the upgrades are not an admission that MCAS caused the crashes.