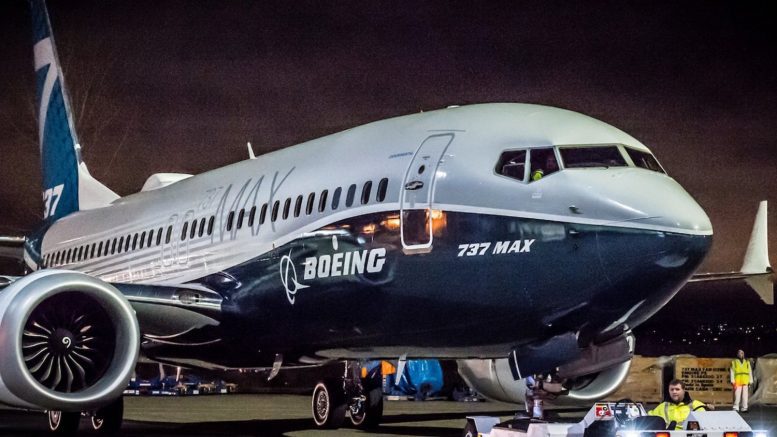 Boeing will cut output of its 737 jetliners by mid-April and is creating a
special board panel to review safety and design after two fatal crashes
prompted regulators worldwide to ground the newest and best-selling
member of the aircraft family.

The industry giant will temporarily cut its production rate to 42 aeroplanes a
month from 52. Boeing plans to coordinate with customers and suppliers to
blunt the financial impact of the slowdown. For now it doesn’t plan to lay off
workers from the 737 program, Boeing Chief Executive Officer Dennis
Muilenburg said.

“When the Max returns to the skies, we’ve promised our airline customers
and their passengers and crews that it will be as safe as any airplane ever
to fly,” Mr Muilenburg said in a statement Friday after the close of regular
trading.

Boeing shares fell 1.9 per cent to $384.49 after the announcement. The
stock has declined 7.2 per cent since the March 10 Ethiopian crash,
making the company the second-worst performer in the 30-member Dow
Jones Industrial Average for that period.
Boeing had planned to hike output of the 737, a workhorse for budget
carriers, about 10 percent by midyear. Suppliers who provide the 600,000
parts needed for each plane had already started moving toward a 57-jet
monthly pace under a carefully orchestrated schedule set in place long
before the Lion Air and Ethiopian Airlines disasters.

The company doesn’t rule out further cuts to production if the grounding
proves to be lengthy. “We’ll continue to assess our production plan,”
Boeing spokesman Chaz Bickers said.

With the 737 Max now grounded indefinitely, the production slowdown will
help Boeing preserve cash. The Chicago-based manufacturer faces losses
of $1.5 billion to $2.7 billion a month as customers halt advance payments
for jets whose deliveries are suspended, Seth Seifman, an analyst with J.P.
Morgan, estimated before the production cuts were confirmed.

Boeing’s announcement comes a day after Ethiopian officials released a
preliminary report on the latest Max accident, concluding that the jet
experienced the same equipment failure as a Lion Air 737 that crashed off
Indonesia in October. The two incidents killed a combined 346 people.

If regulators take their time in certifying the Max’s return to the skies,
Boeing would be forced to stash hundreds of factory-fresh jets in airports
across the Western U.S. until commercial flights resume. As of Friday,
there were 21 of the jets stored at Paine Field north of Seattle, according to
737 production blogger Chris Edwards, and eight at Boeing Field to the
city’s south.

The reversal squeezes suppliers who’d hired workers and invested to
expand capacity. With order books oversold through 2023, Boeing and
Airbus SE had considered hiking production to as high as 70 a month next
decade.

Spirit Aero Systems Holdings Inc., which makes the fuselages for the Max
and derives about half its revenue from the 737, fell 4.1 percent to $85.97
after the announcement.

While the slowdown dials back production to 2016 levels, doing so will
provide some breathing room for suppliers straining to keep up with the
previous tempo, like CFM International.

CFM International, a joint venture of General Electric Co and Safran SA
that builds engines for the 737 Max, doesn’t currently plan to cut output of
the turbofans, according to Jamie Jewell, a spokeswoman.

Maintaining the status quo will allow it to “build on the momentum it has
gained over the last year in meeting the historic Leap ramp up
requirements and will help ensure the stability of the global CFM supply
chain,” Mrs Jewell said in a statement, referring to the new engine model
that powers both the 737 Max and Airbus A320neo.

Boeing’s 737 final assembly in Renton, south of Seattle, borrows from the
lean manufacturing techniques honed by automaker Toyota Motor Corp. to
churn out more than two planes a day. About 90 per cent of the jetliners
made there this year are expected to be Max aircraft, according to Boeing.

A swift return to normal looks increasingly unlikely for the Max and Boeing.
Engineers are still finishing work on a software update for a stall-prevention
system linked to a Lion Air crash in October and the fatal dive of an
Ethiopian Airlines plane near Addis Ababa last month. The disasters killed
a combined 346 people.

Ethiopian Transport Minister Dagmawit Moges recommended Thursday
that Boeing review its flight-control system after releasing a report that she
says showed pilots had followed proper procedures to counter the flawed
anti-stall system in the plane.

Mr Muilenburg on Friday said he asked Boeing directors to establish a
committee to review “company-wide policies and processes for the design
and development of the aeroplanes we build.” The group, chaired by
Retired Admiral Edmund Giambastiani Jr. will study the safety of the 737
Max and other programs and recommend improvements.

Boeing said April 1 that it would be several weeks before the software
patch for the Max is submitted to regulators. The U.S. Federal Aviation
Administration vowed a rigorous review, while authorities in Europe,
Canada and China plan to do their own analysis.

By establishing a common cause behind the two crashes, the Ethiopia
report eliminates the worst-case scenario for Boeing – a new technical
issue that would’ve made it far more complex for Boeing engineers to find a
solution.

“There now appears to be a sound technical fix,” Douglas Harned, analyst
with Bernstein, said in a note to clients Friday morning. “Timing is still
uncertain, however, with multiple investigations underway. Still, we are now
looking at scenarios we believe can keep 2020-21 free cash flow roughly
the same, even though 2019 will likely see large swings in inventory.”

In the UAE, Flydubai is the local carrier most affected by the ban. It has
grounded all of its 737 Max 8 flights. In a statement, the low-cost carrier
said: “Flydubai is adjusting its schedule to minimise disruption to
passengers and will operate flights with its fleet of Next-Generation Boeing
737-800 aircraft.”

With a fleet of 11 Boeing 737 Max 8 and 2 Boeing Max 9, the low-cost
airline is combining routes to ensure that all destinations previously served
by Max 8 or 9 jets will now be flown by 737-800 NGs.

This has resulted in cancellations, with up to 15 flights per day set to be
cancelled over the next few days. A spokesperson for the company said
the airline would be contacting all affected passengers directly.