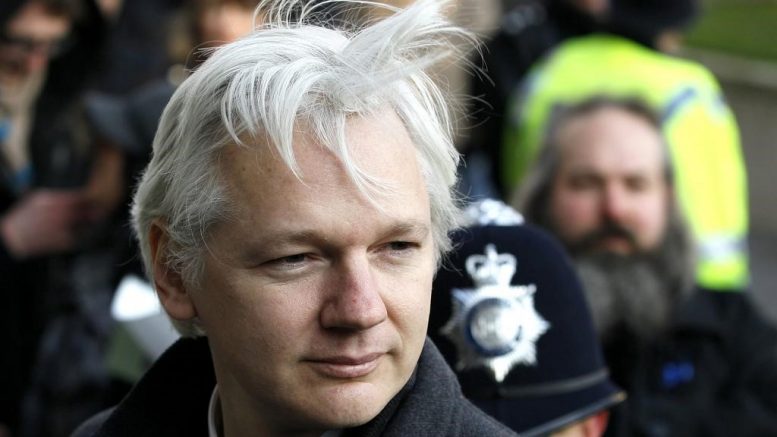 WikiLeaks founder Julian Assange could be expelled from Ecuador’s London embassy within “hours to days”, according to a WikiLeaks source.

Julian Assange has denied being behind the latest leaks regarding his expulsion.

British police patrolled the street near the embassy, as a Free Assange campaign van circulated and supporters attempt to stage a vigil in tents.

The Assange backers hope to some how stop his arrest and subsequent extradition over the publication of confidential US military data.

In a tweet, WikiLeaks claims it has been told by two senior Ecuadorian officials that Mr Assange is to be expelled imminently. A detail the embassy denies.

It is not the first time WikiLeaks has been accused of biting the hand that feeds them when it comes to hacking Ecuadorian intelligence, despite the fact that their London embassy has served as a refuge and home for founder Assange since June 2012.

In one tweet it states: “A high level source within the Ecuadorian state has told @WikiLeaks that Julian Assange will be expelled within ‘hours to days’ using the #INAPapers offshore scandal as a pretext–and that it already has an agreement with the UK for his arrest.”

Assange, an Australian, had initially sought refuge in the embassy seven years ago in a bid to avoid extradition to Sweden where he had faced sexual assault and rape allegations – these have since all been dropped or expired due to statute of limitations.

The 47-year-old has remained inside over fears he will now face extradition to the US over the leaks of sensitive documents if he leaves the building.

The Metropolitan Police and the Ecuadorian authorities have all denied any decision or agreement has been made between them.

But supporters of Mr Assange were gathering in numbers outside the embassy on Friday, at one stage a van was parked alongside them with placards that said “Free Speech” and featured images of Mr Assange and convicted classified document leaker Chelsea Manning.

In a statement from Mr Assange’s legal team said: “Expelling Julian would be illegal, violate international refugee law and be an attack on the UN which has repeatedly called for Mr Assange to be able to walk free.

“It will be a sad day for democracy if the UK and Ecuadorean governments are willing to act as accomplices to the Trump administration’s determination to prosecute a publisher for publishing truthful information.”

The Metropolitan Police said there remains in place an active warrant for Mr Assange’s arrest and that the police are “obliged to execute that warrant should he leave the Embassy.”

Speaking at the G7 meeting in France, Foreign Secretary Jeremy Hunt denied there had been any deal with Ecuador observing that Mr Assange is a “free man” and can leave the embassy “whenever he wants”.

Ecuador’s foreign ministry has issued a statement refusing to comment on what it calls “rumours, theories or conjectures”.

A senior official said that no decision had been taken to expel Assange from the embassy.

On Tuesday, President Moreno blamed WikiLeaks for recent allegations of offshore corruption that appeared in local media outlets and the publication of his family photos to social media.
He also accused WikiLeaks of intercepting phone calls and private conversations as well as “photos of my bedroom, what I eat, and how my wife and daughters and friends dance”.
President Moreno provided no evidence, but the speech reflected ongoing tension between Mr Assange and his hosts at the Ecuadorian Embassy in London.

WikiLeaks has labelled the accusations as “completely bogus”, saying it reported on the accusations of corruption against the president only after Ecuador’s legislature investigated the issue.