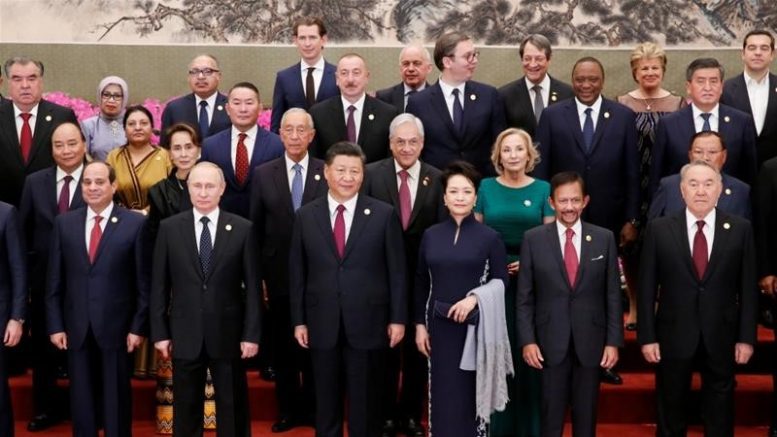 A total of 125 countries have signed up to the Belt and Road Initiative.

Ramped-up efforts to rebrand China’s mammoth Belt and Road Initiative (BRI) were in full swing this week as the country hosted a giant forum and President Xi Jinping touted the benefits of multinational cooperation and sustainable infrastructure while pointing to efforts to address concerns.

The size and breadth of The Second Belt and Road Forum for International Cooperation in Beijing, which covered everything from environmental policy to corruption and China’s lending practices, underscored the effort China is putting on recreating the image of the BRI.

Beyond the hundreds of meetings and the agreements signed, photo-ops with three dozen heads of state, and promises of both private and public investment into infrastructure and trade, Xi took pains to underscore China’s good intentions and commitment to transparency and building “high-quality, sustainable, risk-resistant, reasonably priced, and inclusive infrastructure”, as he said during his keynote speech on the opening day of the three-day forum.

He worked hard to assuage increasingly loud fears that the BRI is a vehicle for China to extend its influence and make some money in the process, repeating this message during a leader’s roundtable and a rare meeting with journalists on Saturday afternoon.

Xi said a total of $64bn worth of agreements had been signed during the forum, but he gave no details or acknowledged who signed them. The initiative – which he launched in 2013 – is “in sync with the times and widely supported”, he said.

“It looks like this is a sort of readjustment of the original One Belt One Road, now the BRI,” said Bruno S Sergi, an instructor on the economics of emerging markets and the political economy of Russia and China at Harvard University and an associate at the Harvard Davis Center for Russian and Eurasian Studies.

The forum shed little light into whether all these new terms translate into more than speeches and a large marketing effort.
At six years old, it is still early days for a plan that is very long term, said Sergi.

To date, about $90bn have been invested in multiple BRI-related projects, but several hundred billion more have been loosely committed and it will be years before all that capital is invested, even though China’s two policy banks have more than $300bn in outstanding financing.

The plan has certainly attracted attention and 125 countries have signed up.
Italy joined, at the end of March, the first major European economy to do so.
But the backlash over the past couple of years has grown. Some countries worry that China is forcing them into a debt trap, or that the plan is another form of colonialism.

Xi took pains to address these concerns at the forum by committing to ensuring both environmental and financial sustainability in projects and investments.

Still, it remains hard to pin down exactly what the BRI is and what benefits it will generate, not because there aren’t any but because the initiative is so big that it defies easy definition.

At the forum, Xi linked the BRI to connectivity and cooperation, to the “challenges and risks confronting mankind”, global economic growth, international trade and investment, governance, multilateralism, green development and innovation.

The BRI may have started out as ostensibly an investing and lending programme for infrastructure but it has evolved into a catch-all for virtually everything China does abroad, blending the lines between economics, politics and military into one giant programme, said Joshua Eisenman, an assistant professor at the Lyndon B Johnson School of Public Affairs at The University of Texas at Austin, and a China expert who has followed the BRI since its inception.

“Over time BRI has evolved into a moniker for everything,” Eisenman said. “When people ask ‘will the BRI work?’ What they are essentially asking is ‘will Xi Jinping’s foreign policy work?'”

Nevertheless, China is filling a funding gap that exists for many countries, particularly emerging economies.
It is a gap that, at least for the time being, no other large economy seems to be willing to fill and in so doing, is lending huge amounts to countries that may not necessarily be able to afford to maintain those loans.

“When the option is to take money or don’t take money, people will take the money every time,” said Eisenman.
Still, for all its pros and cons the BRI may be a vehicle for a new type of national entrepreneurship, said Sergi.
For the effort to be effective the BRI will require “equal efficiency and foresight on the part of the many countries and actors interested in the new Silk Road”.

“Only a commonly felt new approach that moves things in the proper direction could make the BRI a gigantic win-win solution towards better infrastructure, growth and progress and to avoid hegemonic or predatory forms, on the one hand, and prevent indebtedness in some countries as well,” Sergi said.

He suggested the jury is still out on the ultimate effect of the BRI and will be out for a long time to come.
“It looks like the BRI is becoming a ‘waiting for Godot vision’. While a powerful long-term vision, it requires that all actors from the Chinese side and all other countries act with care and commitment to honesty and discernment.”