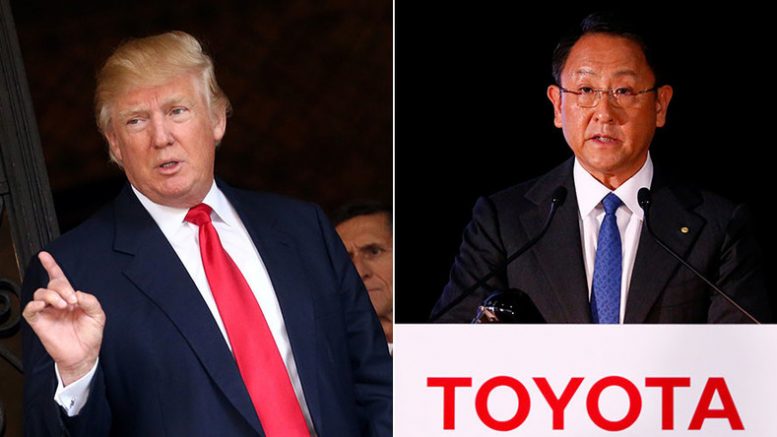 President Donald Trump attacked foreign carmakers on Friday — while postponing a tariff increase for six months — which led Japanese carmaker Toyota to make what could be a veiled threat by pointing out that they are the force behind 475,000 jobs in the United States, one way or another.

According to a report in Bloomberg, “In an unusually strong-worded statement, Japan’s largest automaker said Trump’s proclamation Friday that the U.S. needs to defend itself against foreign cars and components ‘sends a message to Toyota that our investments are not welcomed.’ The company said it has spent more than $60 billion building operations in the country, including 10 manufacturing plants.”

In the statement, Toyota made a pointed reference to how many Toyotas are on the road in the U.S., to say nothing about how the American’s depend on the company for jobs — something that will be important for Trump’s 2020 elections.

“Toyota has been deeply engrained in the U.S. for over 60 years. Between our R&D centres, 10 manufacturing plants, 1,500-strong dealer network, extensive supply chain and other operations, we directly and indirectly employ over 475,000 in the U.S.,” the statement read, adding, “Almost every American has a Toyota story and we are very proud of the fact that over 36 million Toyota and Lexus vehicles are still on U.S. roads today. Our operations and employees contribute significantly to the American way of life, the U.S. economy and are not a national security threat.”

Lexus is Toyota’s in-house luxury range much adored by US citizens and is often chosen as an alternative to the German Goliaths of BMW and Audi.