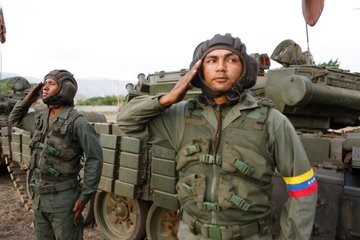 Venezuelan military forces have expressed support for the government of President Nicolas Maduro against any US military intervention, saying they are waiting with weapons in their hands

Venezuela’s military personnel issued the warning on Saturday as they took part in what was dubbed a “march of loyalty” to pledge their allegiance to President Maduro.

“Only the ones who fight have a right to be. You will never invade my country. Listen to us small gringo,” the troops shouted during the parade in the central state of Aragua, using a derogatory term for Americans.

“We are ready. With weapons in our hands … we are waiting for you.”

Maduro marched more than a mile alongside the personnel and military equipment before delivering a speech to slam US imperialism.

Washington and its allies have backed the Venezuelan opposition and ramped up pressure on Maduro to step down. Moreover, US officials have repeatedly stated that all options remain on the table with regard to the Venezuelan crisis, including military action.
As part of a pressure campaign to push Maduro out of power, US Vice President Mike Pence has offered incentives to the Venezuelan military personnel to entice them to defect and join the opposition.

Venezuela has been shaken by political unrest in the past several months. In January, tensions worsened after opposition figure Juan Guaido, who is also president of the National Assembly, unilaterally declared himself “interim president” of Venezuela.
The United States quickly accepted that self-proclamation and has since been working with Guaido.

On April 30, a small group of armed troops accompanying Guaido clashed with soldiers at an anti-government rally in Caracas in an attempted coup that soon petered out even though it was backed by the Trump administration.

Maduro announced in a televised speech that the group of military personnel supporting Guaido had been defeated, and 25 renegade soldiers had sought refuge at the Brazilian embassy in Caracas.

Washington has a long record of sponsoring “regime change” campaigns in Venezuela and many other countries. In 2002, former president Hugo Chavez was ousted for two days in a US-backed coup that was ultimately defeated.

Maduro has repeatedly accused Washington of masterminding a “coup” against his government, blaming the US for the economic crisis in Venezuela due to its economic sanctions.