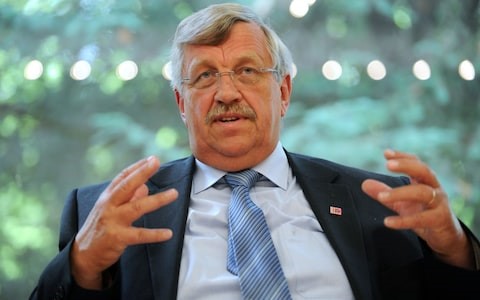 Walter Lübcke was shot in the head at close range

German police have confirmed that a town mayor who became a hate figure among the far-Right was murdered in his garden over the weekend.
Kassel police announced on Monday afternoon they had opened a murder investigation into the death of Walter Lübcke, a veteran politician in Angela Merkel’s CDU party.

The 65-year-old was found unconscious on his patio by a family member shortly after midnight on Sunday and died shortly afterwards after unsuccessful attempts to resuscitate him.

Lead investigator Horst Streiff confirmed that Mr Lübcke was killed by a bullet wound to the head. “Our investigations indicate that he was shot with a handgun from close range,” Mr Streiff said.

At this stage, police say they have no indication as to the motive or identity of the killer, stating that they are investigating “in all directions.”
A team of 20 detectives has been set up to work on the case.

In March Mr Lübcke had celebrated ten years as mayor of Kassel, a central German town of 200,000 inhabitants.
He was a popular politician but had briefly lived under police protection in 2015 due to comments he made in the autumn as hundreds of thousands of refugees and migrants arrived in Germany.

Sources close to the German police told Al-Sahawat Times that whilst all possible motives are being investigated, it is thought to be the work of far-right terrorists.

The far right have gripped and crippled Europe in recent years notably in the UK, Poland and Hungary.

At a town hall discussion about a new refugee centre, Mr Lübcke told attendees that people who didn’t agree with the government’s welcoming attitude were free to leave the country.

His remarks were met with loud boos from the audience. A video clip of the incident was spread online by far-Right groups, leading to hundreds of angry emails, including death threats, being sent to his office.

Two German mayors almost lost their lives in attempted assassinations in the wake of the refugee crisis.
Henriette Reker, mayor of Cologne, and Andreas Hollstein, a small town mayor from the north, were stabbed in the neck in separate incidents. On both occasions the attackers were motivated by anger at the politicians’ work with refugees.